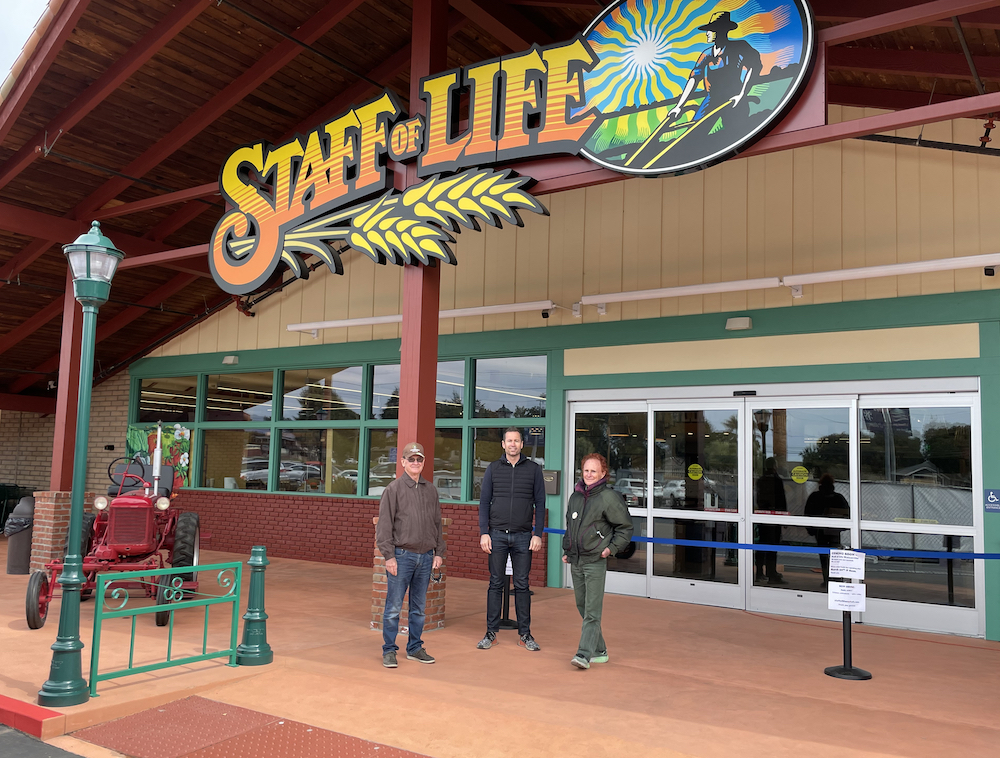 March 24, 2021 – It’s been a long time coming, but despite the challenges of the COVID pandemic, Staff of Life Natural Foods Market is putting the finishing touches on its new Watsonville store.

The pioneering store has set its grand opening for Tuesday, March 30, at 8am and the opening kicks off a month of deals and prize drawings at the store.

The store, only the second for Staff of Life in its half-century-plus history, is the first of its kind in Watsonville, carrying organic produce, high-quality antibiotic-free meats at its in-store butcher department, fresh seafood and a full assortment of grocery items that put the emphasis on non-GMO, natural and locally sourced products.

The store also boasts a huge bulk items section, a juice and smoothie bar, freshly made sushi, a gelato bar, a full deli, a section devoted to vitamins, supplements and natural health care, craft beer and local wine, and a large and impressive cheese department helmed by an award-winning cheesemonger.

Staff of Life was one of the first natural foods stores in the United States and is one of the few locally-owned markets of its kind left in the area. It was one of the founding members of California Certified Organic Growers (CCOF) and Think Local Santa Cruz, and has paved the way for the natural food industry here and throughout the country.

EMB recently got a sneak peek at the Watsonville store as managers and employees were busy stocking shelves in preparation for the opening. The store was originally projected to open in 2020, but was pushed back when COVID-19 shutdowns hit last March.

“Trying to open a grocery store during a pandemic was kind of nutty,” admits Staff of Life’s Richard Josephson, who says that it was difficult to do all the meetings and organizing that are generally called for in such a large undertaking. Despite all the challenges, co-founders Josephson and Gary Bascou persevered, creating a truly unique layout and vision for the Watsonville store, in the process spending more than $7 million for the store’s expansion and extensive renovation.

Bascou says that the idea came about in 2018 when SuperMax vacated the space and Staff of Life was approached by the owners of East Lake Village Shopping Center about taking it over.

“The Codiga family were shoppers at Staff of Life in Santa Cruz and they really wanted one here,” says Bascou. “They made us an offer we couldn’t refuse.”

Staff of Life will join a diverse food hub that is already in place at the shopping center, which includes Sushi Q, Coffeeville, and craft beer maker Fruition Brewing—which happens to be right next door to the new Staff of Life store.

Bascou said the store will employ between 80 and 90 people, many of whom are bilingual, including store manager Nadia Scally.

Bascou is also pleased that the store will introduce next-generation owner Jason Bazarnick to the community. Bazarnick, Bascou’s stepson, has a 25 percent stake in the new store.

The owners are proud of the store’s design, which unlike most grocery stores, features a produce section right in its center. In fact, it’s pretty much the first thing shoppers will see when they enter the store. Since about 99.5 percent of this produce is organic and much of it is locally sourced, it’s an ideal way to highlight Staff of Life’s dedication to its mission, according to Bascou.

Also contributing to the store’s singular style are colorful banners capturing local vignettes, with iconic images of Elkhorn Slough, St. Patrick’s Catholic Church, Santa Cruz County Fair and jarabe tapatío dancers represented. Banners were handpainted by Mott Jordan, specially designed light fixtures were created by Roy Johnson, and window designs painted by Art Thomae. “We want to support the local community like they support us,” says Peggy Bascou, Gary’s wife, pointing out that many of the contractors and artists who worked on the store are from the Santa Cruz County area.

This give-and-take with the community is evident in the vintage agricultural items that are displayed prominently in the store, some of which are on long-term loan from the Agricultural History Project, based at the fairgrounds. It’s important to emphasize the place that agriculture holds in the community, says Peggy, so “we became a sponsor (of the Ag History Project).”

On the grocery aisles, tall shelves hold a variety of products that have been carefully selected for their quality and sustainability. For instance, a walk down the international foods section (conveniently arranged by region) reveals everything from organic ramen to fermented chile paste. At the rear of the store is a sizeable bulk foods section which will carry everything from rice and herbs to granola and nuts, as well as oils, herbs and honey, although part of it will be closed off to customers until pandemic restrictions are lifted.

The store is sustainable down to its bones, evidenced by a new state-of-the-art system that takes heat created by cooling compressors and uses it to warm the store’s human spaces through a heat recovery system, something that Bascou estimates cost more than $200,000 more than a conventional HVAC system would have cost. “In the long run, we’ll get the money back,” he says, “and what’s more important, it’s better for the environment.”

As with its Santa Cruz store, the Watsonville store will carry many vegetarian and vegan options, as well as humanely produced, certified organic meats by Eel River Co., and both conventional and gluten-free baked goods. Bakery items are made at the Santa Cruz store and will be trucked over daily.

A spacious deli offers take-home items as well as grab-and-go lunch items, such as pot pies and sandwiches. (The adjacent salad and hot foods bar has been shuttered for the time being, due to the pandemic.) In addition, café tables will be set up outside so that people can enjoy foods purchased at the store, and there will also be a garden department selling organic vegetable starts.

The cheese department, which is planned to be the largest in the region, is another point of pride. Locally made as well as select international cheeses will be available under the direction of cheesemonger Cesar Olivares, who has won several international awards and is also trained as a sommelier.

It’s anticipated that shoppers from around the Monterey Bay area will find the way to the new store and from as far away as Morgan Hill and Hollister. Judging from the level of interest from people walking and driving by, the East Lake neighborhood can’t wait for the market to open.

“The Watsonville community is growing and changing,” says Bascou, pointing out that an influx of new residents has moved in from other parts of the area because it’s one of the most affordable communities in the Monterey Bay area. “We’re very excited about bringing good, healthy food here.”