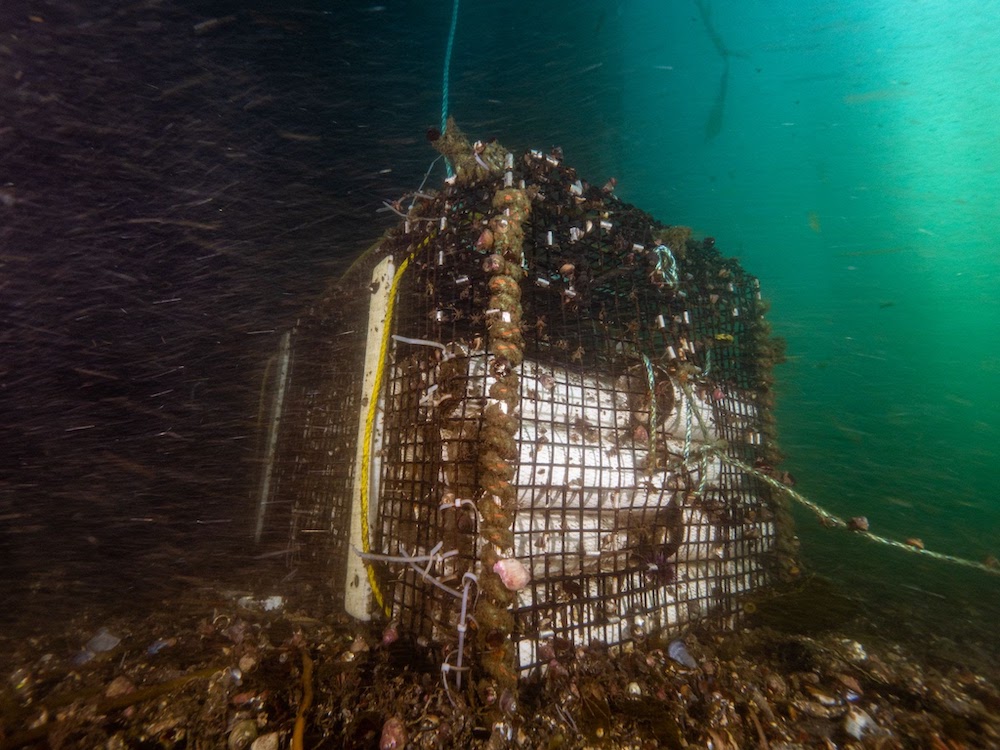 September 14, 2021 – Stepping into the Folktale cellar on a spring day earlier this year, I was immediately struck by the sight of champagne bottles covered with what looked like salt deposits. There appeared to be a speck or two of seaweed on some of them. The patterns left by the salt were particularly intriguing, like snowflakes turned to snippy bits of paper. Obviously, they’d been underwater.  What crazy thing was Folktale up to now?

The concept of aging wine under the sea is nothing new: it’s become rather a thing in the past decade. But Folktale winemaker David Baird admits he was inspired to try it after learning about 170-year-old bottles of Veuve Cliquot Champagne trapped undersea in a shipwreck that occurred in the 1830s off the coast of Finland in the Baltic sea, supposedly on its way to either Germany or Russia. So, in partnership with the Monterey Abalone Company, who farm red abalone beneath the Monterey’s Wharf 2, Baird put 300 bottles of sparkling Sangiovese into cages in the frigid waters of the bay for four months.

“When the diver went to retrieve the bottles,” says Baird, “We were surprised to see so many living things attached, including a variety of calcareous animals including bryozoans, spirorbids, barnacles, and coralline algae. Within and around the cages, we also saw red octopus, hermit crabs, bivalves, tunicates, anemones, sea stars, decorator crabs, and various fish species.”

He particularly remembers an octopus wrapped around one of the bottles, which was of course, carefully removed, but how cool is that? We bantered about some names for this wine, among them: Kissed by an Octopus, Barnacle Bubbles, Sea Star Sparkling and Sleeping With Abalone. But instead, he’s calling the wine Haliotis, the scientific name for the genus abalone. Just don’t mistake it for that other thing your brain immediately wants to translate the word into…the one that means bad breath.

Baird chose Sangiovese as the sparkling base for a couple of really good reasons, the first being, that’s what’s planted on the estate site, and truth be told, it has wicked high acidity, so it’s ideal to use for either rosé or a sparkling base. The wine will be nothing like the 19th century undersea Veuve that was hauled up from the sea bottom in 2010. For one, it will not contain 140 grams per liter of sugar, as was customary at the time. The Russians really liked their Champagne, as well as their wines, sweet and kept sugar at the ready at the table to tune it to their liking. That is one sweet drink, more like a pure dessert wine. Today’s Champagnes from Veuve Cliquot typically contain about 6 to 8 grams per liter of sugar. (In order to be classified as Brut, the sugar level must be less than 12 grams per liter.) Completely dry, this Haliotis sparkling Sangiovese is spritely and bright, and zingy enough to make your mouth water. But, good luck scoring a bottle.

There’s only one way you can acquire one of these aquatic rarities. Members of Folktale’s Chapter 12 Club will be invited to a very exclusive event on October 15, with only 60 seats in the Rose Vineyard at Folktale in Carmel Valley. The evening will begin with a cocktail reception and a selection of Folktale wines, followed by a sampling of the sparkling and a brief discussion of its lifecycle by Baird himself. The kind folks from Monterey Abalone Company will also be present to share a bit about how they farm their tasty treats. They are in high demand, as a combination of ocean warming and ravenous purple sea urchins has killed off the kelp forests that support the native abalone population, which means the mollusks are starving to death.

Chef Todd Fischer will wow the guests with a spectacular food and wine pairing, featuring the fruits of the sea, including red abalone farmed by Monterey Abalone Company, as well as the fruits of the many vineyards from which Baird plucks grapes, turning them into one delectable experiment after the other. Perhaps purple sea urchin will be on the menu: it’s plentiful and it might go well with the undersea bubbly.

Says Baird, “I think people are going to love this amazing and delicious sparkling! So bright, crisp and totally refreshing. What better way to pay homage to our local region than to make a wine that truly represents a place, not just from the grapes and the growing season, but also the ocean and climate that made it all possible.”

Bottles of the mollusk-approved sparkling will be available for sale that evening for Chapter 12 members only. If any remain, they will be offered to Chapter 6 club members. The price of the bottles had not been set. Each bottle will be adorned by a tiny abalone shell. Tickets for the exclusive Haliotis unveiling on October 15 are $195pp, for Folktale Chapter 12 members only.