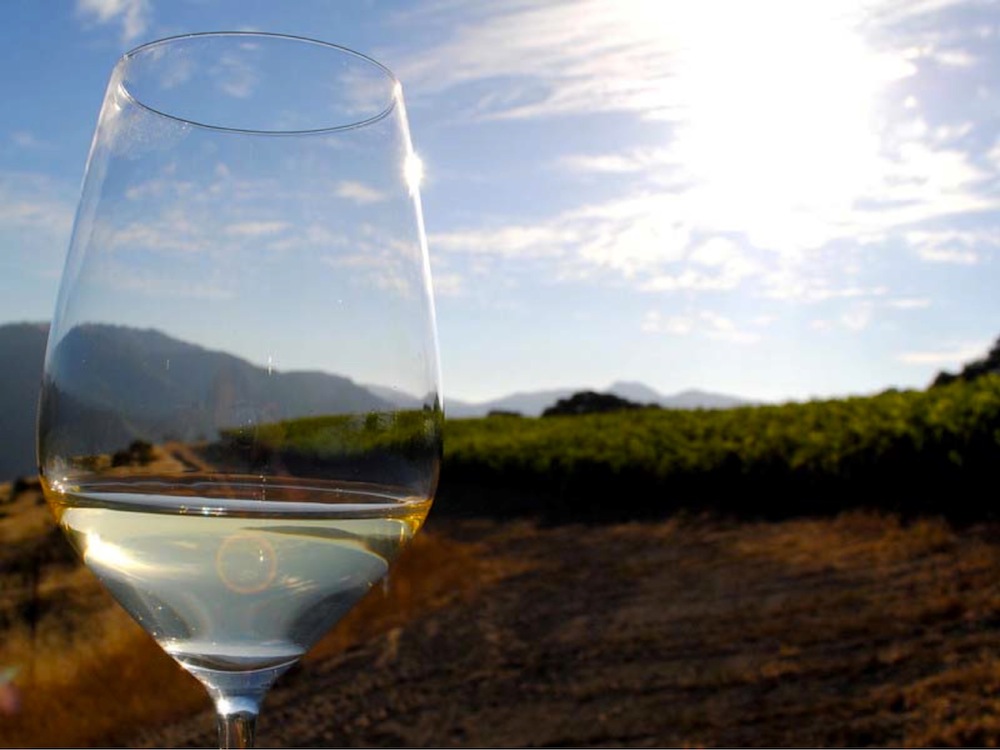 Wine tasting is always enjoyable. Gaining access to a winery’s cave is a treat. But to receive an invitation into the vineyards is an oenophile’s dream come true. At least it’s this wine‐lover’s dream. And, this week, for the first time Holman Vineyards opened up their gates and invited their wine club members and guests to take a stroll through the vines. Rocky soil beneath your feet, fresh summer air, and sun‐baked hills that stretch as far as the eye can see, and—of course—a glass of wine in hand made for a truly charming vineyard tour.

Nick Elliott, Guest Services Manager at Holman Ranch, met us at the Holman Vineyards’ tasting room in the Carmel Valley village and four of us loaded up into his vehicle. On the way Nick gave us a history of Holman Ranch and talked to us about the vineyards that are planted on 19 of the 400 acres that make up the Ranch. We wound through the property, up a dirt road, and headed to the lower vineyard of Pinot Noir grapes that were planted in 2007 and sits at approximately 1100 feet elevation. Before we even set foot through the final gate, Nick broke out his corkscrew, distributed glasses, and poured us each a generous portion of their 2010 Pinot Gris. The slightly fruity aroma swirled with notes of mango and honey, but the whisper of citrus created a crisp finish. It made me wish that we had some ceviche—tender chunks of fish marinated in lime juice and spiced with fresh peppers—to go with it.

As we sipped the wine, we walked through the olive grove which Holman harvests to produce its extra-virgin olive oil. We paused and Nick pointed out the different kinds of olives. The Italian trees on the right were taller and the leaves had a dusty sage hue to them while the French olive trees on the left were stouter with brighter green leaves. Holman hand‐harvests and cold presses the olives, bottling the oil onsite and offering them for sale at the tasting room and through the company’s website. Reaching a slight plateau, we stopped, tasted more of our wine, and soaked up the evening sun, reveling in the 360‐degree view from that vantage point. All around us were Pinot Noir Dijon clones 667 and 777, acres of them. To me, Pinot Noir means ‘love’; it’s definitely my wine of choice and Holman Vineyard’s 2010 ranks high on my list. Aged in French oak for a year, it’s a full‐bodied red with robust cherry on the nose and a slight earthy layer of tobacco. It’s luscious.

In French, Pinot Noir literally means “black pine” and refers to the pinecone shape of the grape bunch on the vine. These bunches were still green, but will ripen and be prime for picking in less than a month.

Nick noted slight differences in bunches from one end of the row to the other and discussed how the terrain affected the grapes. We were standing on sedimentary soil where the larger chunks of rocks and slope of the vineyard aided drainage for the vines. The grape bunches on the steeper end of the row were slightly larger and contained plumper fruit than those on the more level ground.

Moving from the rows of clone 667 to clone 777, Nick showed us the difference in the leaves. The leaves of the 667 were smaller and had five lobes while the 777 leaves had only three lobes and were significantly larger. Nick asked, “Can you imagine rolling these leaves into dolmas?” I definitely can. Nick discussed future plans for the Ranch, including small sites for intimate gatherings beneath the craggy oaks that dot the vineyards.

And though this news hasn’t been officially released yet, for Pinot Noir lovers, this is something of which to take note: Holman Vineyards is looking at creating a six‐pack of single Dijon clone pinots in limited release. Right now they have the 2010 Hunter’s Cuvée Pinot Noir which is created from clone 115. I tried it recently, in my wine club selection, and loved the sweet vanilla and berry notes. It paired well with grilled lamb lollipops and a sour cherry chutney. So, when they do offer the six‐pack with wines made from six different Dijon clones, I’ll be one of the first to say, “Sign me up!”

Also coming up, Holman Ranch is partnering with Edible Monterey Bay for its August installment in the Pop‐Up Supper Club series. At this farm‐to‐table dinner, guests will feast on a meal prepared by Chef Terry Teplitzky, of Marina’s Wild Thyme Deli and Michael’s  Catering. The menu, based on fresh, seasonal offerings from Serendipity Farms, will pair with Holman Vineyard’s 2010 Pinot Gris, 2010 Rosé of Pinot Noir, 2010 Chardonnay and the 2010 Hunter’s Cuvee Pinot Noir. A portion of the event’s proceeds will benefit the Food Bank for Monterey County, which delivers more than 6 million pounds of food to 90,000 area residents every year. The event affords you an opportunity to dine among the vines, feast on seasonal foods, sip local wines, and enjoy the company of fellow philanthropic foodies. It’s not to be missed.

This vineyard tour was the first of many that Holman Vineyards will offer in the coming months. I can’t wait to sip wines among the vines again soon. Join us next time!