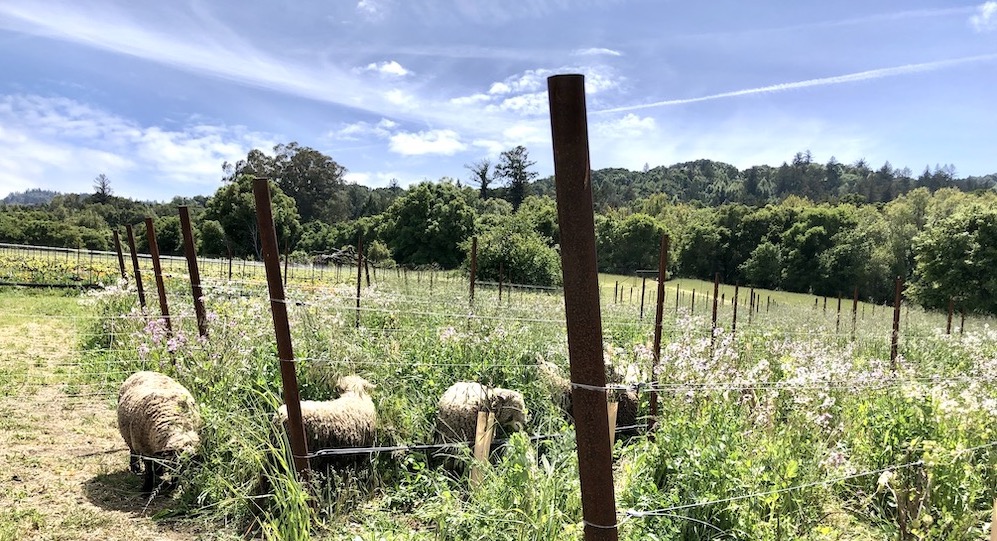 May 28, 2021 – Such a beautiful bucolic scene unfolded as I arrived at the Neely family’s new vineyard in Portola Valley for the first time last March. Bordering the land that makes up Lower Windy Hill Preserve, it couldn’t feel more natural and take-a-deep-breath inspiring. Birds flitted through the air and it smelled of spring.

The young vines, planted in 2016 and now in their fifth leaf, were just beginning to show signs of life, poking their tiny green heads above the trellis wires. All around were wildflowers, flashes of golden poppies, lupine, paintbrush, coral bell, shooting star and asters, all purple swirls and yellow twirls, the air buzzing with life. In fact, the cover crop was going a bit bonkers. “Where are the sheep?” I asked Lucy Neely, operations manager for the vineyard and winery.

Knowing her love of nature and all things natural, she would certainly be more interested in having them mow down the cover crop than to disc it in mechanically. Several weeks later, when I returned, a dozen sheep were happily munching on everything in sight, under the watchful eyes of shepherds who were monitoring how interested the wooly lawnmowers were in the vines. “It’s all your fault,” Lucy said, with her impish smile. Ironically, the vineyard is named Leoncito, or “little lion,” after her young son who is growing up on the property.

The 2,000 vines planted here are Chardonnay, both Wente and clone 4, planted on two different rootstocks. There’s also Gruner Veltliner, about which winemaker Shalini Sekhar—a New Jersey native and music major who found her calling in the cellar—is most excited. And a rootstock block, where they are experimenting to see which vines do best in this soil. It’s also a nursery for replacement vines, as the pressure from gophers here is pretty intense. They’re discussing among family members what else to plant, since they already have a lot of Pinot Noir, planted on the upper Spring Hill Vineyard in three blocks: Hidden (3 acres, planted in 1997, north facing, clone 115 on 5C rootstock), Picnic (2 acres, clone 777, planted in 2000 on 5C rootstock) and Upper Picnic (2 acres, clone 777 grafted in 2006 onto Gewurztraminer rootstock planted in 1982). Lucy’s Dad, Kirk, favors Cabernet Sauvignon, but she and Sekhar are more interested in something exotic like Gamay.

Lucy, a botanist and plant biologist, installed and managed community gardens in Mendocino County before returning home to Spring Hill, where she grew up. The vineyard is her happy place. Last year, she insisted on making a rosé for the first time. Fittingly, it’s named for her. Sekhar chose to pick from the Hidden Block for the inaugural rosé, because it is always the most exuberant with its density of fruit. “Ironically, we had already planned to make the rosé before the fires began this past vintage and we were picking pre-dawn the morning the smoke started to make its way over the ridge. Fortunately, we had made our picking decision because the fruit was ready and we avoided any real smoke contact.”

Consequently, they picked earlier than they normally pick for red Pinot Noir to maintain the fresh acidity. Says Sekhar, “I performed a gentle pigeage and left the fruit to macerate for an hour. Then the whole clusters were placed into the press and gently pressed to extract a medium intensity hue. The juice was settled and fermented entirely in stainless steel to preserve the pure fruit aromas.” She racked once and filtered prior to bottling in March 2021. They’re releasing the wine to their wine club this week.

The 2020 Meadow Reserve “Plum” Chardonnay, which is from the new vineyard at the bottom of the property, is done in stainless to create a different style than they’ve ever produced under the Neely label. Explains Sekhar, “Since we planted a new block of Chardonnay, we thought an interesting way to approach the wine in contrast to our Legacy blocks would be to evaluate the wine for a few vintages in stainless steel so that we can learn the character of the block as it develops. This give us a contrast stylistically to the 40-ish year old vines we have already, but also allows us to evaluate the new block and make any stylistic decisions or changes by tasting the pure character of the wine.”

Lucy calls this wine, which was stainless steel fermented and aged sur lie without stirring, “Leoncito,” for its vineyard origin, and they may begin using that on the label next year.  Sekhar says, “Perhaps Leoncito will stay an unoaked wine for the long-term, but certainly I could imagine a future utilizing concrete, egg shaped vessels, or even some neutral oak as part of the program. With the new blocks, we aren’t dogmatic—it’s an exploration of the site and our range of wines.”

As for the rest of the 2020 Chardonnays, Sekhar says they are an early ripening site, and she feels they are golden and solid. With the Pinot Noir, the jury is still out.

There’s always 2021. And some nice fat sheep. The 2018 Hidden Block Pinot Noir, with its tantalizing cedar, orange peel, strawberry rhubarb core and great acid, would be a great accompaniment.

Tasting at Neely Wine is by appointment only.