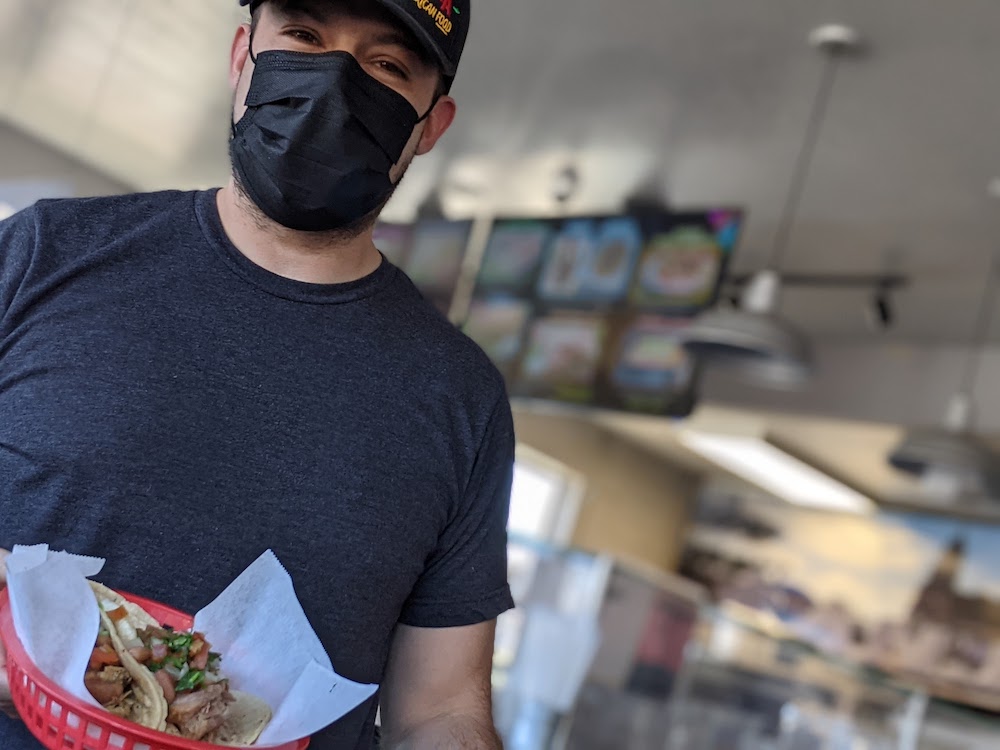 April 27, 2021 – A flying horse wall mount, left over from the Boardwalk Sub Shop era that preceded the current one, remains on a table, as does the purple color scheme on the walls and pleather booths.

But make no mistake: This is a whole different act. The brisk business sizzling before noon on this Tuesday, which has the small and hustling taco-shop team sweating, is one of the vital signs that Salinas’ new Mi Taqueria is off to a strong start.

The thing is that it’s not exactly new. If the emerging spot, which opened mid-pandemic, generates deja vu, that’s because you’re old-school and remember Mi Taqueria when it was on the east side.

Young owner-operator Emmanuel Campos, who amid the early lunch rush was Tasmanian Devil-ing from the counter to expediting to helping fine-tune a new cook in the kitchen, says the realization takes a second.

“It happens slowly, but a couple of people have said, ‘I remember this restaurant,’” he says. “Did it used to have a big rooster on it?” (For the record, it did.)

But that was a full two decades ago. That’s what feels a little like a cinematic script: It’s not often that a restaurant takes a 20-year hiatus and returns successfully. Then again, it’s not uncommon that a restaurant dishes shrimp tacos dorados, which were a major motivator for my visit.

It’s also rare that a property enjoys as much history as this one. Campos is already well familiar with guests describing their experience at the pizza place that was here way-back-when or of the restaurant where they first worked.

“I’m not too familiar with the history of the property,” he says. “But I can tell you there’s a lot of it.”

Campos grew up in the east-side restaurant attending to kid-friendly chores in the kitchen until he could steal away to the arcade. What he remembers most vividly is the smell of carne asada, which today he considers his signature item. The family recipe calls for a two-day marinade that involves two types of citrus, oregano and lean slicing before serving. (Campos is hesitant to be anything but vague on recipes, which is understandable.)

His dad Hector shut down the Sanborn Street spot and three others to escape a micro-chain reality that had grown unmanageable and to help his nuclear family cope with a tragic accident. After post-college searching, Emmanuel went on the hunt for his own business calling. He helped with a tortilla business. He tried commercial painting. He worked at retail. He found some success with an embroidery business that’s still sewing, but mostly ran up against a common obstacle for local entrepreneurs.

“It was tough battling corporations,” he says.

An important plot point: He kept barbecuing with his family, who continued to cook according to the Campos family recipes.

Eventually he observed his brother, Hector Jr., find success with the old family craft in Camarillo, California, with Hector’s Taqueria, which explains the cups with that name next to the soda fountain in Salinas. He started a search for his own property, and ID’d a prime location at the doorstep to Oldtown when it opened up. Maybe Campos smelled a little carne asada in the air.

I’m glad he did, because the restaurant occupies a key piece of foodie infill for Salinas, which rarely gets the culinary credit it deserves.

“He thought I was crazy,” Emmanuel says. “Coronavirus timing, not knowing what was going to be the future, or whether anything would go back to normal.”

His father’s misgivings were validated by multiple shutdowns and shifting regulations.

“Indoor, outdoor, open, closed,” Emmanuel says. “I could never see my clients. I still don’t know who they are because of masks. It just throws everything off. The coronavirus is hectic. We didn’t know if we could do what we want here, which is bring back community to Salinas.”

The simple shrimp taco starts with a tortillería Campos has loved as far back as he can remember, El Grano de Oro, and fills its slightly thicker corn tortillas with Monterey Jack, then slow cooks so the cheese mates with three plump 16/20 shrimp. (He’s testing various seafood suppliers; the grilled shrimp in my tacos were fresh and nicely textured, with a hint of a proprietary blend of lemon pepper and other spices Campos, again, stops short of revealing.) A wedge of avocado and cilantro go in after that. The house green salsa kicks it all up a notch in flavor, the roasted dark Serrano or dried red Chile-cayenne-garlic kick it up several degrees of heat.

While it’s not technically a dorado since it’s not deep-fried, I’m OK with that. A tiny touch of oil with the specific choice tortilla and slow cooking on the flat top gives it a good crunch without opening floodgates of grease.

Same applies to the carnitas, which are turned slowly to avoid charring, over five hours, and emerge tender and meaty. Campos won’t say much about the secret recipe but he recoils at the suggestion it might involve Coca Cola or Dr. Pepper, like some do.

“You can’t hurry it,” Campos says.

Whatever the case, it’s straightforward and satisfying, though I’d like to see a little more crisp to the edges. The salsas come in clutch here too.

“I want things as fresh as possible, and I don’t want our meat sitting for longer than two days of marination,” he says. “I want my refrigerator empty.”

The carnitas, as with all non-dorado tacos, lay on a foundation of tortillas pressed in house, with some pico and not much else. The “super” brings on cheese and avocado.

“I’d like to think our family recipes stand out. Everybody has their own mix, but I like ours,” he adds.

As I waited for my order I saw dad Hector walk through, which fit with what Manuel told me about him: “He usually comes in the morning, and he’s the type that once he’s in the kitchen, he’s in the kitchen, and you don’t want to work him too hard. He’s one of those lifers.”

Hector told me he missed the taquerias of the past, but was happy to see two of his sons so engaged in the family trade.

Part of that is enthusiasm for the grind that was visible today. I am hopeful that the learning curve flattens for the team. They got the food out and it tasted great, but the process wasn’t completely smooth.

A simple enough rule, for a place focused on doing simple food well—which isn’t difficult to appreciate, but can be tricky to pull off. Here’s hoping Campos and company can.