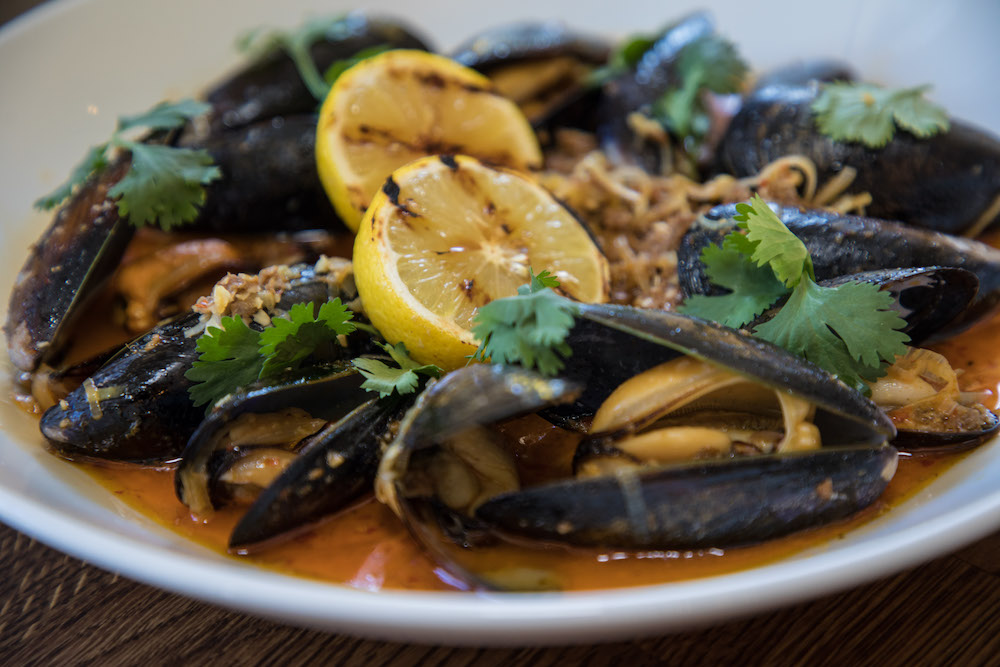 September 28, 2021 – Those who walk into the Hyatt Regency Monterey may first be struck by the fresh new look inside, but the reimagined style is just the start of the changes here. Thursday marks the grand opening of Sea Root restaurant at the Hyatt, replacing the former TusCA with new focus and flavors.

Sea Root moves a bit further around the Mediterranean to embrace the flavors of the ancient spice trade that flourished there in centuries past. Sea Root appears to be a play on the words root and route—and its menu harkens back to those flavorful roots.

“If I had to pick one influence, it would be Malta. It’s such a melting pot,” says executive chef Dan Elinan, who developed the new menu to both show off a rich medley of Mediterranean flavors and local bounty. “The spice route comes from both sides of the sea, and we’re embracing that and tying it into Central California cuisine.”

Some of the Edible Monterey Bay crew recently had the opportunity to experience a private tasting of menu items prior to the revamped restaurant’s grand opening, and to pepper Elinan with questions about the delicious new dishes.

Elinan, who has been at the Monterey Hyatt for almost three years, looked to offer not only a fresh perspective on Mediterranean fare, but also something new for both locals and visitors. “It’s Mediterranean with a touch of Italy and a touch of Spain,” he explains, and lighter fare is highlighted.

He and GM of Restaurants Will Reynolds wined and dined the table with shareable small plates that included housemade focaccia, black mussels spiced with harissa tomato butter, and warm haloumi and watermelon, an imaginative pairing of cheese and honey compressed watermelon chunks with a mint-tumeric dipping sauce.

Elinan notes that there’s a new emphasis on seafood in the menu, with such entrees as shrimp arrabbiata bucatini, Pacific seabass and brown butter diver scallops given star billing. Other entrees include a risotto verde, spiced lamb shank, New York strip steak and smoked half chicken.

Each and every one is accompanied by unique and intriguing flavors—for instance, the spiced lamb shank comes with a crisp pea and quinoa tabblouleh, grilled kale and buttermilk tzatziki.

The Mediterranean flavors even extend to the desserts, which include a Moroccan bread pudding with ice cream spiced with star anise, cardamom and limon. Elinan points out that it’s not really a bread pudding—it’s made with leftover croissants. A California-inspired wine menu and new craft cocktails are available.

Elinan’s career has taken him around the globe, so he has years of experience in world cuisines. He’s been an exec chef at Primetime Restaurants and Boscolo Hotels in Hungary and the chef de cuisine for Shangri-La Hotels in Hong Kong and Shanghai. Stateside, he’s been at Hyatts and Hiltons from coast to coast, and earned a four-diamond rating for The Cavalier Hotel’s Becca in Virginia Beach in early 2018.

He and Reynolds are a formidable force when it comes to hospitality, with Reynolds’ experience as a managing partner at Tarpy’s Roadhouse and also running Hullaballoo and the National Steinbeck Center in Salinas. Reynolds recently returned to this area after 14 years in Florida. The two are now making plans to re-open Knuckles Sports Bar in early 2022.

It’s all part of a property-wide transformation (introduced earlier this year) that includes what is called “reimagined public spaces” in addition to redesigned guestrooms and suites. A coffee and pastry bar, Central Coast Provisions, has been added at the entryway to the restaurant, and the entire space encompassing the restaurant and adjacent spaces is now light and airy, with a nod to Craftsman design and a bay-inspired color scheme in tones of white, seafoam green and light blue.

Crafting the restaurant to complement the newly designed interiors was an interesting challenge, Elinan says, but it all fits together “when you feel the space.”