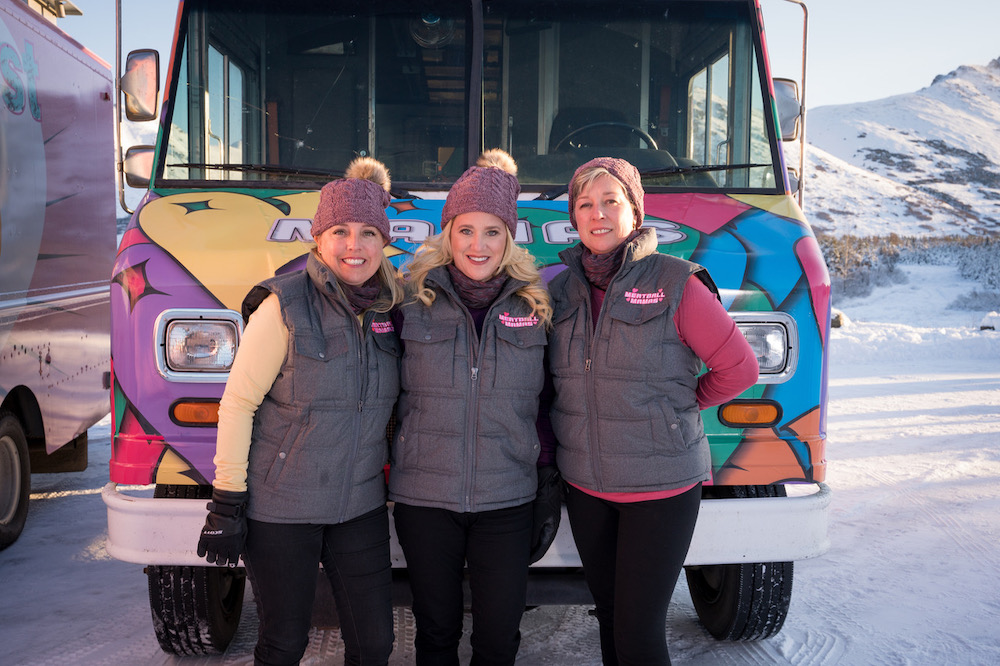 March 2, 2021 – Scotts Valley chef and cooking instructor Jocelyn Denson enjoyed the “adventure of a lifetime” as part of the Meatball Mamas team competing on the new season of The Great Food Truck Race, hosted by celeb chef Tyler Florence.

Taped last year over a period of four snowy weeks in Alaska, the show pits seven food truck teams against each other and against the elements for a grand prize of $50,000, and Denson says winning takes much more than just culinary talent.

“It was really fun, but I truly did not expect all the shenanigans that went on during the filming and off camera,” says Denson, who is not allowed to give away too many secrets about how the competition unfolded.

“The scenery was magnificent and the people in Alaska were so great, they came out in droves to buy our food and were very excited to see us up there,” she adds.

We do know that the series—which premieres Sunday, March 7 at 10pm on the Food Network—begins on Flattop Mountain overlooking Anchorage. Before they can get into the food trucks provided by the show and start cooking, the contestants must retrieve the keys which are buried in a 200-pound block of ice.

After that, the objective is to meet more challenges, cook great food and sell more than the other trucks. Each week a team is eliminated.

The competition continues to Palmer, home to some of the largest vegetables in the world; deep sea fishing in Homer; panning for gold and Alaskan crab challenge in Seward and a scavenger hunt in the arctic remote village of Talkeetna. In the season finale the two remaining teams go head-to-head in Fairbanks.

Denson was tapped to become part of the Meatball Mamas by her friend Aly Romero. The two were classmates in the culinary program at Diablo Valley College in the East Bay. Denson later moved to Scotts Valley, where she worked for a weekly meal prep company up until the pandemic hit.

“The phone just rang one day and she asked me to join her. It was such an amazing opportunity, I hung up and thought for about two seconds and called her back to say yes,” she recalls. It was Denson’s first time to visit Alaska and her first time as a food truck cook. A third teammate, Flora Londre, joined them for the adventure.

While we don’t know how our local gal fared in the competition or whether she won it, we do know she’s was not inspired to start her own food truck business. “Not at all,” she laughs, while admitting to a fondness for meals from the Scrumptious Fish & Chips food truck that can often be found parked outside local breweries.

“It’s really hard work. It’s a long, long day. I have nothing but respect for the people who operate food trucks and restaurants, but it’s a tough business,” she says.

For now Denson is teaching cooking classes via zoom through her company Lessons in Food. She specializes in basic cooking techniques and lessons for people trying to move towards more plant-based diets. Her website is full of delicious looking recipes.

We’ll be tuning in Sunday night to see how she does and Denson will be joining family members for a socially-distant viewing party at her parent’s house. “We’re going to put the TV in the garage, lift up the garage door and open a bottle of wine and watch the show from the driveway,” says the woman who knows how to meet a challenge and doesn’t mind the cold.