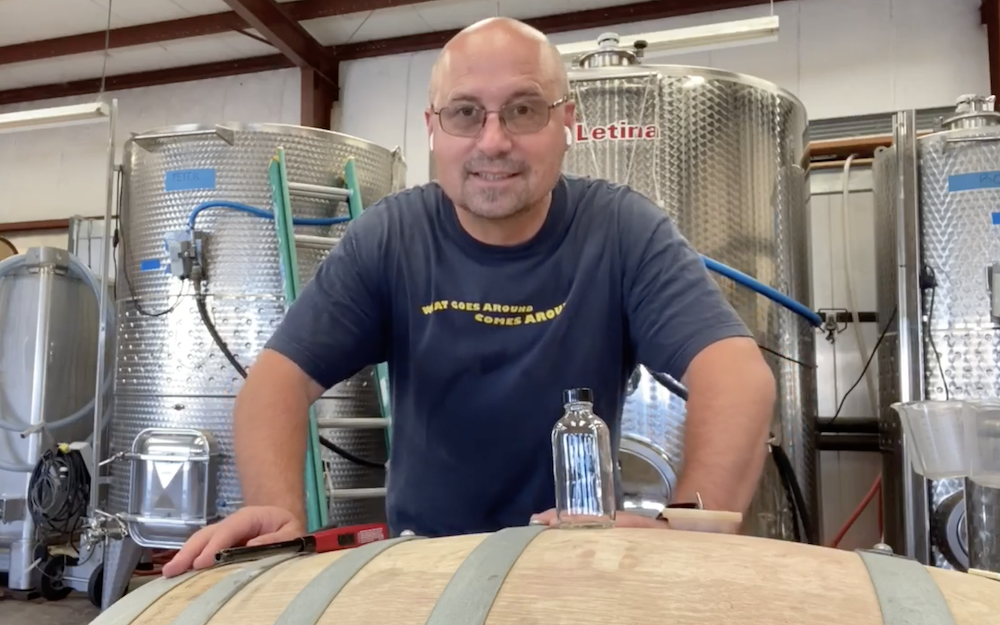 September 15, 2020 – At last, the Sante Arcangeli tasting room has reopened in Aptos, after a six-month hiatus due to Covid, not to mention the hellish heat, the relentless smoke, and the continuously unfolding series of mind-bending disasters that 2020 has wreaked upon us. Just when you think….um, never mind.

Winemaker John Benedetti had intended to open earlier, but with the the CZU fire and smoke coming from the River and Carmel Fires, he decided to be safe. He also wanted to keep the roads clear for evacuations and our amazing first responders. Thus the tasting room ended up being closed until September 12. Dare we celebrate just yet?

At the same time, the Sante Arcangeli tasting room in Pescadero, which has also been closed since March  (due to Covid), was, along with the entire town, under an evacuation order as of August 19. Mother Nature has not been in a kind mood this year. Thankfully, firefighters contained the fire sufficiently to preserve the town of Pescadero, where Benedetti’s family has operated the Arcangeli Grocery store for three generations.

We’re in the middle of harvest, although many vineyards are literally left hanging, the fruit sadly destined for bird food. Benedetti would have brought in many tons of fruit by now from various local vineyards, for his own label and those of others. But the incessant heat wave has monkey-wrenched this harvest. He posted on FB recently, “Today I made the difficult decision not to harvest Pinot Noir from Split Rail for the 2020 vintage. It’s not the smoke, but the heat that completely cooked the crop. Last week we had hope for a harvest from one block on the morning side of the vines, but this second heat wave decimated what we’d hoped to salvage. The hits just keep on coming.” Being 120% committed to making fantastic wine, this just wasn’t going to cut it. Split Rail fans like me are crying in their vodka tonics.

Benedetti says he feels like Mad Max walking in the vineyards. He told me that he has many custom crush clients for whom he has to make calls regarding harvesting fruit, and it’s just not looking good with all the smoke. Being a grower may be the most immediately ungratifying job this year, but being in a position where you are responsible for making go/no go decisions regarding other people’s fruit, might be even worse.  Says Benedetti, “Mother Nature can be a cruel mistress sometimes.” He says “it sucks” because he could stand to lose 1/3 of his gross revenue if he cancels custom crush contracts. “But I will not make compromised wine for anyone if they plan to try to sell it.”

At this point, Benedetti has only harvested enough fruit from the Hand in Hand Vineyard to make 50 cases of wine for his own label. He hasn’t gotten smoke taint lab results back yet from his pre-harvest micro ferments, and is anxiously awaiting the results from the lab that is backlogged with everyone else wanting their grapes and ferments tested as well. He cancelled his Santa Lucía Highlands contracts this year, in favor of concentrating on Corralitos. He might venture back into the Anderson Valley or the Sonoma Coast, with a focus on the best of the best vineyards. He admits that after trying out Santa Lucía Highlands fruit, it turns out “it’s just not my jam.”

Hours at Aptos are 12-4PM Friday, Saturday and Sunday.  Benedetti notes that if they are busy and sufficient folks come to support them, they will stay open later. To reserve a table, please call or text 831-207-6048 or email aptos@santewinery.com .

Please wear a mask upon arrival until you’re seated. The first weekend showed great promise: come on down to Aptos. You can also taste almost next door at Ser, where you can enjoy a pleasant outdoors tasting of three different flights of three wines each, including the new 2019 Ser Vermentino from Cedar Lane Vineyard in Arroyo Seco and 2017 Cab Pfeffer from Wirz Vineyard. Both amazing.

A bright spot of news for Benedetti in that the fruit from Deer Park Ranch, from which Lester Family Wines are made by Benedetti and other winemakers, initially tested negative for smoke impact during the early and critical days of the wildfires. So, there’s a potential upside for this vineyard.

Down the line, Benedetti is working on a fresh new start for the Pescadero tasting location. “Amid orange skies, plague and losses I do have one small bit of happiness to share,” he said. “I was waiting to announce this, but today it seems that some good news is needed: My Pescadero tasting room is moving to Harley Farms. We have a large barn there, with outside picnic tables and lots of outside, idyllic space to roam. They make amazing goat cheese there, which will be an integral part of the experience. Stay tuned for opening dates and details about our picnic basket reservation program.”

As of press time, Benedetti was still waiting on paperwork to move forward with this venture. Not a surprise, given all that the authorities have had to deal with of late. Does fire breathing down your neck count? Benedetti says, “I’m just waiting on the ABC now. They keep losing the forms I send them and then blaming me for not sending them. Probably late fall or winter. It’s hard opening anything in Pescadero during winter though, because it’s so slow there.”

With any luck, the air will clear and by this weekend, hanging out in Aptos will be a pleasure.  And you might just catch a glimpse of the ocean.