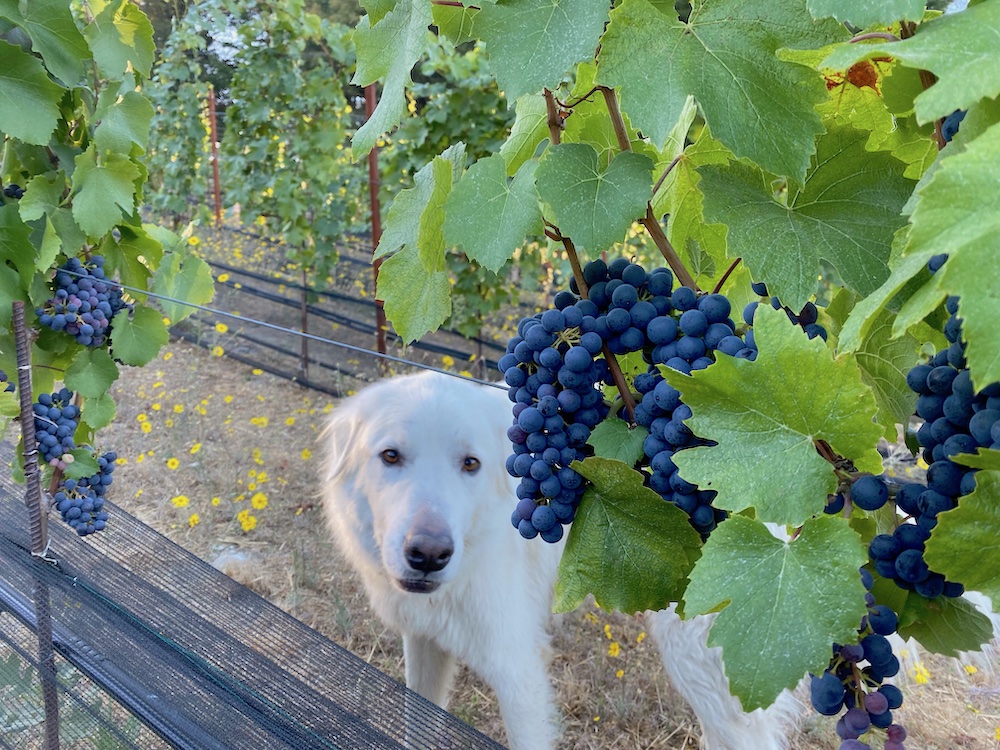 September 7, 2021 – Some of the grapes that were planted in the Santa Cruz Mountains back in the early days of post Spanish settlement had names that might seem strange to us now, like Pinot Chardonnay—as in a grape. There was also Sauvignon Vert and Muscadelle de Bordelaise, all planted in the area of Jarvis Road, not to mention Mission, the most pervasive of all, which was favored by the friars for making Angelica, a sweet dessert wine. It’s enjoying a renaissance of sorts, but there’s currently no Mission planted in the Santa Cruz Mountains AVA. You will find it in the Santa Clara Valley (Guglielmo grows it) and in the Sierra Foothills (Story has some of the oldest Mission vines in existence), where it makes a decent, sometimes remarkable, rosé.

What we do have, though, for its inaugural harvest this year, is Aligoté. For the first time, Ken Swegles of Rhizos Viticulture, brought in a tiny amount of this exceedingly rare grape that is one of the lesser white wine grapes of Burgundy. Chardonnay, of course, is queen, followed by her courtesans, Aligoté, Pinot Gris, and Pinot Blanc. In fact, Aligoté is a member of the Chardonnay family.  It is rumored that Aligoté was the original white grape of Burgundy, but it was replaced by Chardonnay after disease destroyed many of the vines in the 1880s. It is considered inferior to Chardonnay in that is known for its floral and mineral core, with crisp white peach, lemon and acacia notes. It does not lend itself to fruit forward and bodacious flavor or behavior.

Swegles initially planted 151 vines at the Ascona Vineyard, located on Skyline Boulevard, at 2200 ft. elevation, on the site of an old Christmas tree farm. There are many of these crazy collections of misfit conifers between Gist Road and Black Road that have grown to outsize proportions. Clearly once shorn to perfection to fit in the average living room, they are now towering giants, still struggling to maintain their enforced shapes, like they’d been packed into a streetcar, elbow to elbow with their fellow mercilessly maimed firs.

Early ripening and frost resistant, Aligoté is known to like cool sites and Ascona fits the bill, with views of the Big Basin watershed on one side and a peak of Silicon Valley on the other. “We got about 36 lbs!” says Swegles. Better than nothing. Cole Thomas will be making it for Madson Wines. Josh Jensen, the notorious Burgundy lover, installed some at Mount Harlan at Calera Wine Company in San Benito County in 2004, where there is less than ½ acre. It will be interesting to see which site comes closer to the examples from Burgundy, which are typically paired with fish dishes, salads and stinky cheeses. Swegles installed an additional 250 Aligoté vines that will come online next year.

He also tells us that he planted 900 Aligoté vines in Ben Lomond at Chateau Partage for owner Mark Bright, who is about to open a tasting room in Los Gatos later this fall. Swegles says he’s planting 500 vines next spring for another client in Saratoga. “Any time I get a new installation client, I am strongly suggesting they plant Gamay and Aligoté.”

Ascona is also the only site with Gamay Noir planted in the Santa Cruz Mountains. It looks gorgeous, with its fleshy blue purple clusters that seem to belong to Titian color palette.

Mark Chesebro has 2.5 acres of Gamay Noir planted at the Cedar Lane Vineyard in Arroyo Seco, from which he made some astonishingly dark and deeply flavored wine in 2019. One sip took me to a place far away from any red I’d ever experienced. It was like finding the hidden basement of dark secrets beneath the princely palace of Pinot Noir. Not only is the color intense and brooding, but the flavors are distinctly black and blue, vivid and captivating. Winemaker Kenny Likitprakong of Hobo Wines, makes a rosé from it, and there is a waiting list for the fruit. Chesebro says “On years that I exceed the contract tonnage, I make some for myself. Last year there was fruit left over, but due to the smoke, I made a beautiful rosé instead of red wine.”

He thinks it’s in demand because there is not much of it planted and the wine is very approachable. “True Gamay Noir has only been in California since the mid 1980’s. A lot of things were called Gamay but weren’t. One small block is on 18-year-old roots but most are about 5 years old. I don’t have any more room to plant but I would if I did. I like to keep a diversity of varieties that do well at my site,” he adds.

And let’s not forget that, at 2600 feet above the Monterey Bay, Loma Prieta Winery has some of the highest elevation Pinotage in the world. They just harvested 12 tons of it on Sunday, September 5, a full month earlier than in 2019. By that time, in October, the vines had started to shutdown, and were already wearing their autumn yellow robes. This year, the vines are vigorous, and despite the drought, put out a pretty decent crop, although viticulturist Prudy Foxx, who worked with the former owner to establish the initial vineyard, told me they’ve gotten as much as 22 tons off this site in the past. Loma Prieta’s consulting winemaker Andrew Brenkwitz spent 20 years at Byington Winery on Bear Creek Road and is making Pinotage for the first time. Owners Chris Arriaga and his daughter Samantha are experiencing their first harvest as well. They’ll be bringing in Pinotage from Lodi soon.

In other news, Beauregard just released their 2020 “Lost Weekend,” a blend of Zinfandel and Carignane from Contra Costa that was brought in right before the fire broke out. It literally made itself, while Ryan and his neighbors saved their homes and livelihoods in Bonny Doon. Safely under a tarp during the entire firestorm, the wine is a miracle. It’s really inviting, delicious and intense, in the way of old vine wines. Open some and toast a harvest that is so far, so good.