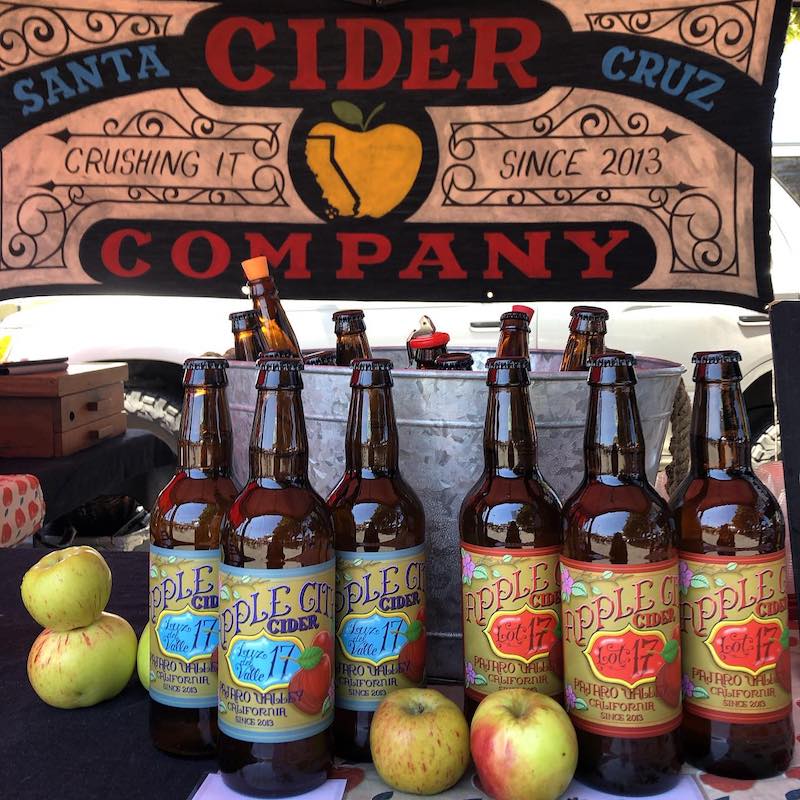 August 20, 2019 – Apple City Cider Tasting Room, owned by Santa Cruz Cider Company, is opening its doors for business on August 24 right next door to Elkhorn Slough Brewery at 65 Hangar Way in Watsonville. Opening festivities will run from noon to 8 pm and attendees can expect live music and food from Killer Chef catering.

“Watsonville used to be called Apple City, and we wanted to pay homage to the apple community and the history that’s already here,” says co-owner Natalie Henze. Following the grand opening, the tasting room will be open Fridays, Saturdays and Sundays from noon to 8pm.

I met with Henze, who owns the business with her sister Nicole Todd, at the company’s apple farm in Corralitos to see where the production takes place. At a glance I spot ten different types of apples, but Todd assures me that doesn’t even begin to scratch the surface of apple varieties grown there.

As we sit to talk, Todd tells me she migrated to Santa Cruz from the Fresno area when she was 17 to attend UC Santa Cruz, and Henze followed four years later. Todd discovered her passion for hospitality while working at Bonny Doon Vineyard’s tasting room and learning about wine.

“Going into a job where people were just happy and looking for a good time totally changed my idea of what a job could be,” she says.

After working at Bonny Doon, she went to Santa Cruz Mountain Brewery, where she assisted in running the brewery and making beer. There, Todd discovered she was gluten sensitive and couldn’t actually drink the beer she brewed. But what seemed like a curse ended up being a blessing in disguise.

Mixing her knowledge of both beer and wine, Todd started searching for other things to ferment. She and Henze came across an abandoned property in Watsonville full of apples, and along with their husbands, Felix and Justin, filled their truck with the apples they found and brought them back to the brewery. Once they learned how to press the apples, they began making 80-100 gallon batches of fermented hard cider while figuring out legal ways to sell it.

In 2012, a friend bought the property they’d used as their apple source and he gave them free rein over any apples they picked. At the time, Henze was running Go Green Cab, a biodiesel company in Santa Cruz, and was more familiar with the business side of things. She teamed up with Todd to help with all of the licensing needed, and by 2013, they’d produced nearly 800 gallons of cider and landed three different accounts to sell their kegs to around the Santa Cruz area.

To help them get started, Santa Cruz Mountain Brewery also gifted Todd and Henze with their first apple press—a little wooden basket that crushes and juices the apple—and that’s what they used for the first few years.

The three accounts around town turned into upwards of 40 and now, with upgraded equipment and a facility to ferment the cider, they’re ready to open their first tasting room to the general public.

“We’ve been growing, a lot of the times the hard way, by learning from our mistakes,” says Henze. “I think because of that, it’s been more of an organic and natural process instead of just shoving money at the problem.”

“When you plant an apple seed, you don’t get a true-to-fruit result,” says Todd. “If you plant a Newtown Pippin, you’re not going to get a Newtown Pippin. It’s going to be either the parent plants or some wild crab apple version, so you can really create new types of apple varieties by just planting seeds and then breeding different ones together. It can get pretty intense,” she says.

“Most ciders are a blend of five to nine different types of apples,” says Henze. “Although some apples, like the Newtown Pippin and the Gravenstein, we use on their own.”

As of now, Santa Cruz Cider has nine different ciders available, including its signature Wooden Tooth Special and the Gravenstein Champenoise (made using the traditional Champagne method), but with the new facility, experimentation is high on the list of priorities. They currently offer a strawberry cider, as well, but are eager to bring back a popular watermelon mint variety they made a few summers ago.

A few soft opens, like one they did on the 4thof July with Elkhorn Slough Brewery when the line for cider never stopped, has helped spread the word, but once their doors open this Saturday, the sky’s the limit for the Apple City Cider Tasting Room and the sisters that run it.