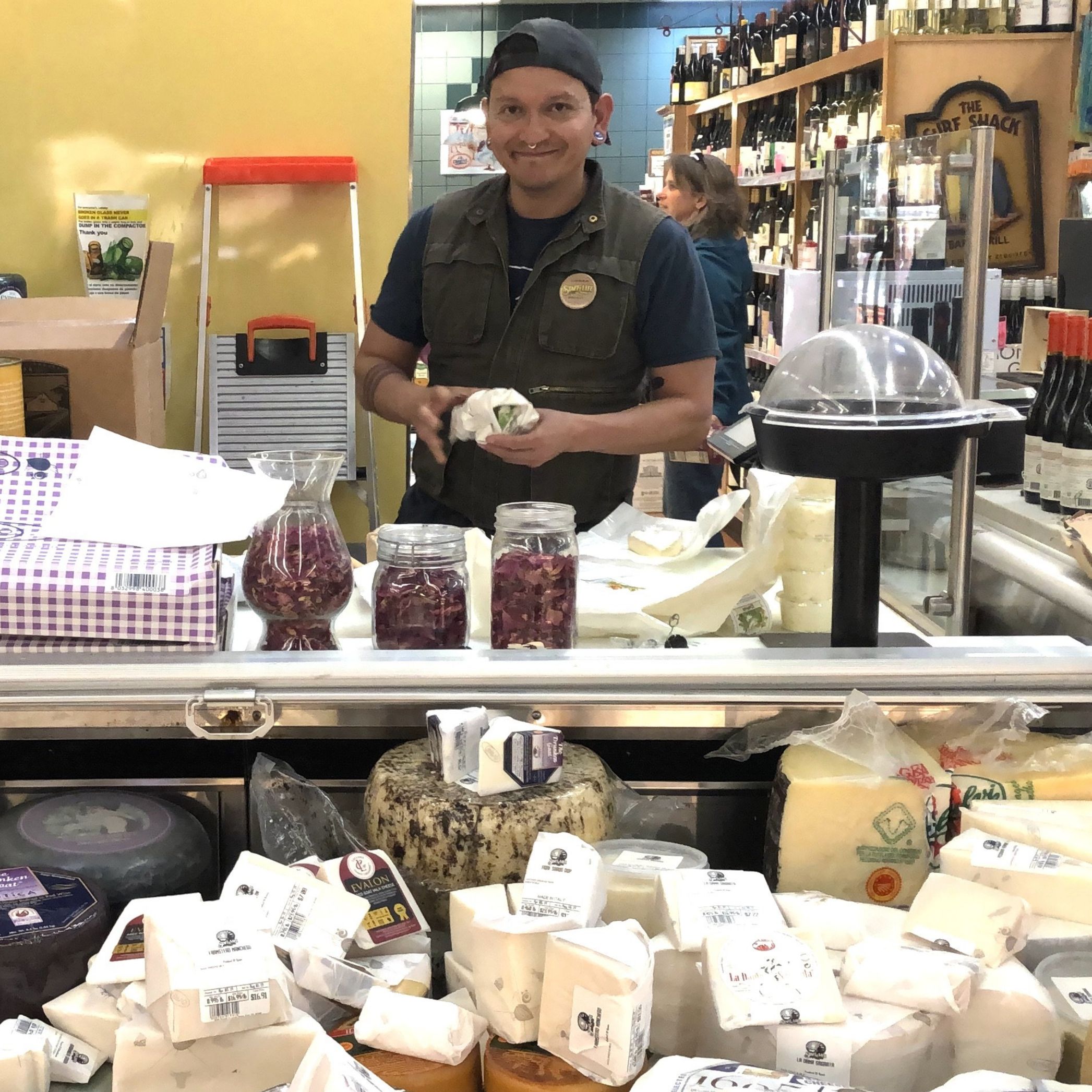 April 9, 2019 – César Olivares—gourmet foods manager at Staff of Life market in Santa Cruz—is in France this week to prepare for an upcoming competition.

Not just any competition, but the Mondial du Fromage, a biennial test that on June 2-4 will determine the best cheesemonger in the world.

Twelve people are competing this year, by invitation only. César is the first Latin American ever to compete.

Like the Oscars, just being invited is an honor—a recognition of one’s gifts.

Born in Mexico, Olivares grew up in Los Angeles and arrived in Santa Cruz as a student, graduating from UCSC with a BA in political science. He had worked at the food co-op on campus and after graduation started at Staff of Life as a cashier, and that’s where he first dipped his toes into his métier. It was a humble introduction.

“The cheese guy at the time needed help cutting cheese,” he says. “It was just breaking down blocks of cheddar into smaller parts. It wasn’t romantic.”

To make use of that college degree, Olivares moved to Chicago and started down the corporate road. But after a few office jobs, he found himself again as a cheese guy at a small, artisanal food shop with three employees in the Lakeview neighborhood. He started making “cheese kits,” select pairings, boxed sets of cuts of different cheeses; sold together as part of one’s weekly shopping trip or for parties.

Seven years later, the shop—Pastoral Artisan Cheese, Bread and Wine—had grown to 100 employees, three storefronts, a warehouse and a significant online business. Olivares had been promoted to cheese buyer, but he really wanted to learn the art of cheesemaking.

“You’re a city boy,” Judy Schad of Capriole Farm gently teased him. But she helped Olivares take it to the next level by inviting him to apprentice on her farm, where he learned the intimate connections between cheesemaking and farming.

But things did not go as planned.

“It took about three days for me to admit that I didn’t want to be a cheese maker,” Olivares says with a grin. Nonetheless it fostered a respect for the farmer/artisans who make it their life’s work. He started visiting farms on his own, and he nurtured a burgeoning curiosity for producers.

“Back then, as now, I tried to buy in a very direct and uncomplicated way. I buy from farmers whenever I can. I go to Europe and I pick out reels I like. Along the way I’ve developed relationships,” he says.

Then he trained as a sommelier and learned about wine pairing and the importance of terroir, and so inspired, formally applied these lessons to cheese. He developed classes on cheese appreciation for Pastoral’s corporate clients, and when he started teaching the classes himself he realized he was developing his own voice and his confidence grew.

Being a “cheesemonger” was well established in Europe and elsewhere at that time, but it was still new to the American food scene.

“Now it’s an industry. Being a cheesemonger is a ‘thing,’” Olivares says.

He had been there seven years and Olivares was Pastoral’s creative director. He’d travelled the world as a buyer, but he missed his home, family and friends. So in 2016, when Staff of Life’s store manager Russel Kreitman, who had worked with him 15 years before and had remained a friend asked him to “help him out with their cheese,” it must have felt like truly coming home. And as Kreitman says, “it was a great opportunity for the store.”

Olivares has competed at the Cheesemonger Invitational (CMI) in San Francisco among some rather high-energy peers, the best on both sides of the country, and he placed sixth two years running.

But the Mondial du Fromage, the international invitational launched in 2013, is a whole other level. It’s managed by highly regarded and acknowledged expert, Rodolfe Le Meunier, whom the LA Times has referred to as “a French butter rock star,” (they might have just led with “God of Cheese”), and it was Le Meunier himself who invited Olivares to compete.

It will be a highly individual competition. “Precision, harmonious composition, audacious presentation and true proficiency will be the key words throughout the tests in store for them,” according to the Mondial’s website. So, no big deal.

I couldn’t do a better job of describing the intensity of this competition than NPR’s The Salt. In the world of cheese, it doesn’t get any bigger than this.

Staff of Life is a natural grocer, celebrating its 50th anniversary this year. It smells so good, it’s the sort of place you never want to leave.

In the indoor-outdoor seating area, with a few hours to go before leaving for the airport, César shared a sampler plate with the community table.

Working from mildest to strongest, the flight he selected included local gems and imported masterpieces from all over the map, perfectly arranged to encourage the trip.

So, budding caseophiles out there, head to Staff of Life in about a week when César returns from his practice session overseas. Sample some of his wares and wish the artist good luck at the competition in June.