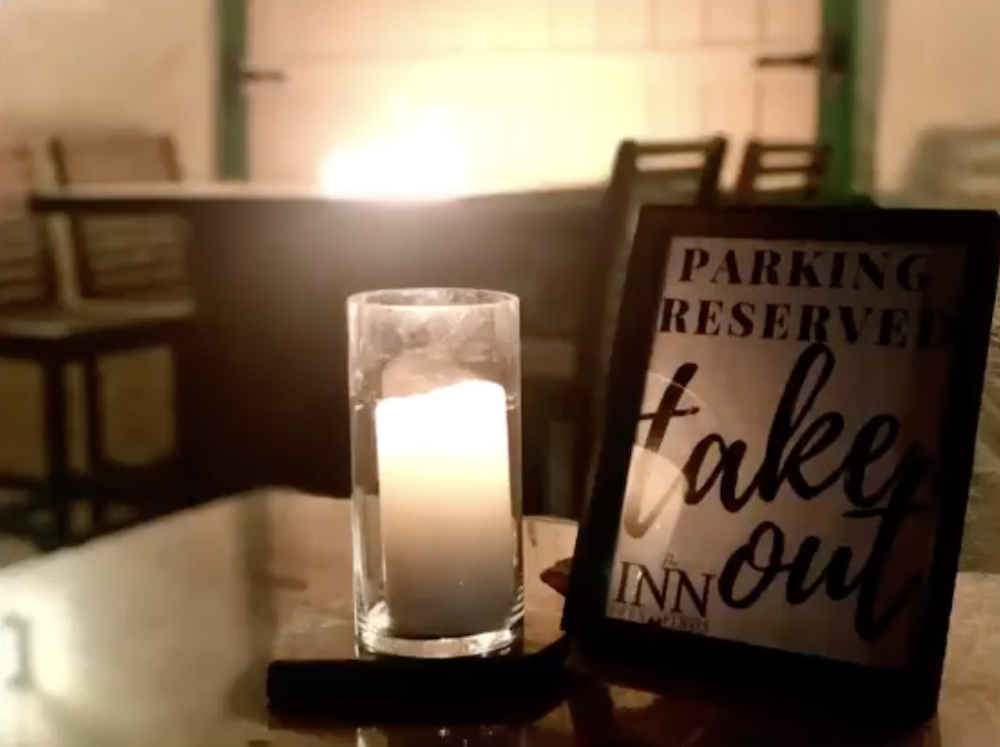 December 15, 2020 – As restaurants and bars across Monterey County adjust to a new stay-home order this week and those in Santa Cruz County brace for news of theirs, one local Central Coast county has already seen its hospitality sector locked down for nearly two weeks.

When the state broke California into five regions to coordinate efforts to stem surging coronavirus cases, officials lumped Monterey and Santa Cruz counties into the Bay Area region, but placed San Benito County in the San Joaquin Valley region to the befuddlement of locals.

The San Joaquin Valley and Southern California regions were the first to reach the state’s shutdown criteria. Their ICU capacity fell below 15% mere hours after the new regional management for coronavirus precautions was announced, while neighboring Monterey and Santa Cruz counties remained open. (Of course late Sunday evening, Monterey County joined several others in the Bay Area region in preemptively issuing stay-at-home orders, but as of press time, Santa Cruz County remains open.)

“We’ve had 15 to 20 customers every day who came in and left when they found out we didn’t have outdoor dining. You could hear them say ‘Let’s go to Monterey or Watsonville,’” recalls Nick Winkler, general manager for Jardines De San Juan in San Juan Bautista. “They thought we were part of the Bay Area region, and that came as a big surprise to us as well.”

Losing business to their neighbors added insult to injury for San Benito County eateries experiencing the one-two punch of a winter slowdown and a regional stay-at-home order.

“It’s cut our revenue by 50%,” says Leeana Brothers, manager for Inaka Japanese Restaurant in San Juan Bautista. She also points out a pervasive problem restaurants are facing when they pivot to takeout—food costs have gone up. “We’ve always had a good takeout business, but when you switch to this volume, the costs are a lot higher.” Inaka’s co-owner Steve Io chimes in, “And takeout container prices have skyrocketed too!”

The pandemic and its series of shutdowns has hit Francisco, or “Frankie,” Berlanga twice as hard. His bakery—El Nopal, with two locations in Hollister—doubles as a tortilla factory. While the bakery navigated sales slipping as customers sheltered at home, more troubling was the impact to wholesale accounts.

Restaurants, taquerias and trucks ordering tortillas were suddenly doing just 20% of their normal business and canceling orders with El Nopal. Berlanga has now lost all wholesale accounts for tortillas.

“I had to let two workers go that worked on the tortilla line with me. These were employees who have been there for years,” he says, audibly distraught by the decision. “I gave them everything they had coming for this year—vacation time, sick time, holiday bonuses, everything extra they would have gotten for the year—but that was the best I was able to do in that situation.”

Io likens the pandemic—and this second shutdown in particular—to taking a rollercoaster ride with a blindfold on. “There are ups and downs and side to sides, but you don’t know what’s coming.” Given the uncertainty of the virus spread and regulations for San Benito County businesses, Io and Brothers have been staying cautious and nimble. “You don’t know what’s going to happen day to day,” says Brothers.

They’re both grateful to the longtime community support that’s persisted throughout the pandemic. Io’s parents are longtime veterans of the hospitality industry and even now continue to be involved with Inaka. “Both my parents have a pretty faithful following, so in that aspect we’re really lucky.” Brothers points out loyal customers have helped the restaurant keep an even keel despite turbulent waters. “I’m on the phone taking orders and people say, ‘I just want to support you.’ They may order just one sushi roll, but they want to support us.”

Mike Howard—owner of The Inn at Tres Pinos—has leaned on decades of experience to stay level headed with the ups and down of the pandemic. “I look at everything as a cycle. I’ve been there 30-plus years. We’ve been through some pretty crazy times in the past.”

He notes how the butterflies that fluttered in his stomach when he first opened the business have returned. “I was grateful when one person came in, so excited just to have a customer,” he recalls. With business stifled during the restaurant’s normally busy holiday season, he’s once again especially grateful for each patron who walks through the door to pick up takeout orders.

“At this point what we’re attempting to do is limit our losses,” he says. “We know our normal operating revenue isn’t going to be there. You limit your losses, hold on and operate within a safe manner.”

Nevertheless, Howard refuses to compromise the welcome his customers get, even to pick up takeout. Candles are lit, lighting is dimmed, music pulses softly and outdoor firepits flicker creating the same first impression as if the restaurant was open for business as usual. “We want to provide a comfortable refuge with a sense of normalcy that people have had for the past 30 years.”

“Normal” is an unfamiliar concept for two San Benito County businesses that opened during the pandemic.

In July, Calavera Coffee made the leap from a shared space inside Farmhouse Cafe and opened its first official cafe in Hollister. “We weren’t trying to plan how we would reopen when things were ‘back to normal,’” says owner Evan Morris. “We needed to create our new normal.” While he laments not being able to debut the new cafe with that iconic coffeehouse vibe of sitting and sipping a latte from a porcelain cup, he recognizes the importance of keeping the community safe. “Even if things didn’t go as planned, as long as everyone is cool and safe, that’s what matters.”

Pour Decisions Tap Room opened in Hollister in July. “We opened during Covid, so we’ve never had a ‘normal’ day in our entire operations so far,” says co-owner Jonathan Cuilla, laughing. The new taphouse has navigated the ins and outs of regulations and ups and downs in business these past few months. Nevertheless, the reality of the new regional stay-at-home order was sobering. “The first day it was a ghost town. No one was out, it was like an old Western,” recalls Cuilla. “It was disheartening to see a place so lively the day before barren the following day.”

Cuilla and co-owners Nick Donaldson and Joe Nguyen may be discouraged, but they’re not defeated. “We approach things with an upbeat attitude, we’re going to get through this. We’ve come up with some pretty innovative ways to market stuff, reach out to our audience and still get traffic.”

With the downturn in foot traffic, many businesses—new and old alike—are pivoting. They’re trying new promotions, diversifying revenue streams and doing anything they can think of to hold on.

“Becoming a to-go restaurant was a huge transition for us,” explains Winkler. He notes how Jardines De San Juan would do a handful of takeout orders each week, with patrons overwhelmingly preferring to dine in. Besides building infrastructure for to-go meals, the restaurant has had to remind its regulars it’s open for a different sort of dining experience this winter.

The 43-year-old family-run restaurant has leaned on social media to showcase its new takeout-friendly menu and share seasonal specials to drum up support during the stay-at-home order. The restaurant is featuring a different promotion until Christmas Eve—mention “12 Days of Jardines” for the day’s secret savings like a discount on dinner or free chips and guac with a meal purchase. “We’re trying everything that we can.”

Other longtime establishments have also turned to social media to engage their regulars and recruit new customers. Word of mouth within the local Latinx community had long been sufficient to sustain El Nopal, but when the pandemic arrived in March, one of Berlanga’s employees launched an Instagram account to help engage new followers. “We found ourselves having to remind people that we’re here,” recalls Berlanga.

Likewise, Morris notes how important Instagram has been for building awareness of Calavera Coffee’s new cafe. And to keep his staff employed during the pandemic, Morris has enlisted them in creating Calavera Coffee’s merchandise. “One is a ceramicist, others do a lot of drawing and digital animation. We decided, let’s come up with different ways to put our brand out there.” Shirts, pins and more designed by Calavera’s baristas are for sale in the shop and online. “By doing more in-house design, people feel more connected to it,” says Morris. “They can say, ‘I know the barista who designed this.’”

Cuilla has also found ways to tap into staff’s skills and expertise to expand the digital reach for Pour Decisions Tap Room. Online ordering had been in the long-term plan, but the lockdown made it an immediate priority. A staff member in school for computer science is now dedicated to web development and integrating the point-of-sale system for web commerce.

But not all pivots have been successful.

Berlanga recalls debuting delivery at the start of the first shelter-in-place order this spring, but his well-intentioned effort to increase access backfired when customers became frustrated by delivery times. (A friendly reminder—please be patient as businesses navigate new pandemic pivots.)

Howard is pulling up his bootstraps at The Inn at Tres Pinos this winter. “Adversity is part of our business. We enjoy the challenge. And our customers, our guests, our friends have all been supportive.”

But like other restaurateurs, he wishes decisionmakers would engage with restaurants when considering regulations that are testing the resolve of his industry this winter. “They don’t have any skin in the game.”

Instead, he recommends tapping hospitality leaders to help guide decisionmaking and find a better balance between public health and small business. “I believe there’s a way to manage commerce and the pandemic.”

Other restaurant owners share Howard’s frustration with state leadership—and have been more vocal about their discontent. Statewide, there are lawsuits, protests and even outright defiance against the state’s tightening restrictions on restaurants. Hollister’s own Paine’s Restaurant and Bar is defying the regional stay-at-home order and serving diners outdoors and even in the dining room.

Berlanga empathizes with the mounting pressure on the owners of restaurants and other small businesses this winter. But after the loss of both of his parents within the past two years, he has a new perspective on life’s priorities. “There’s something more precious than money—life.”