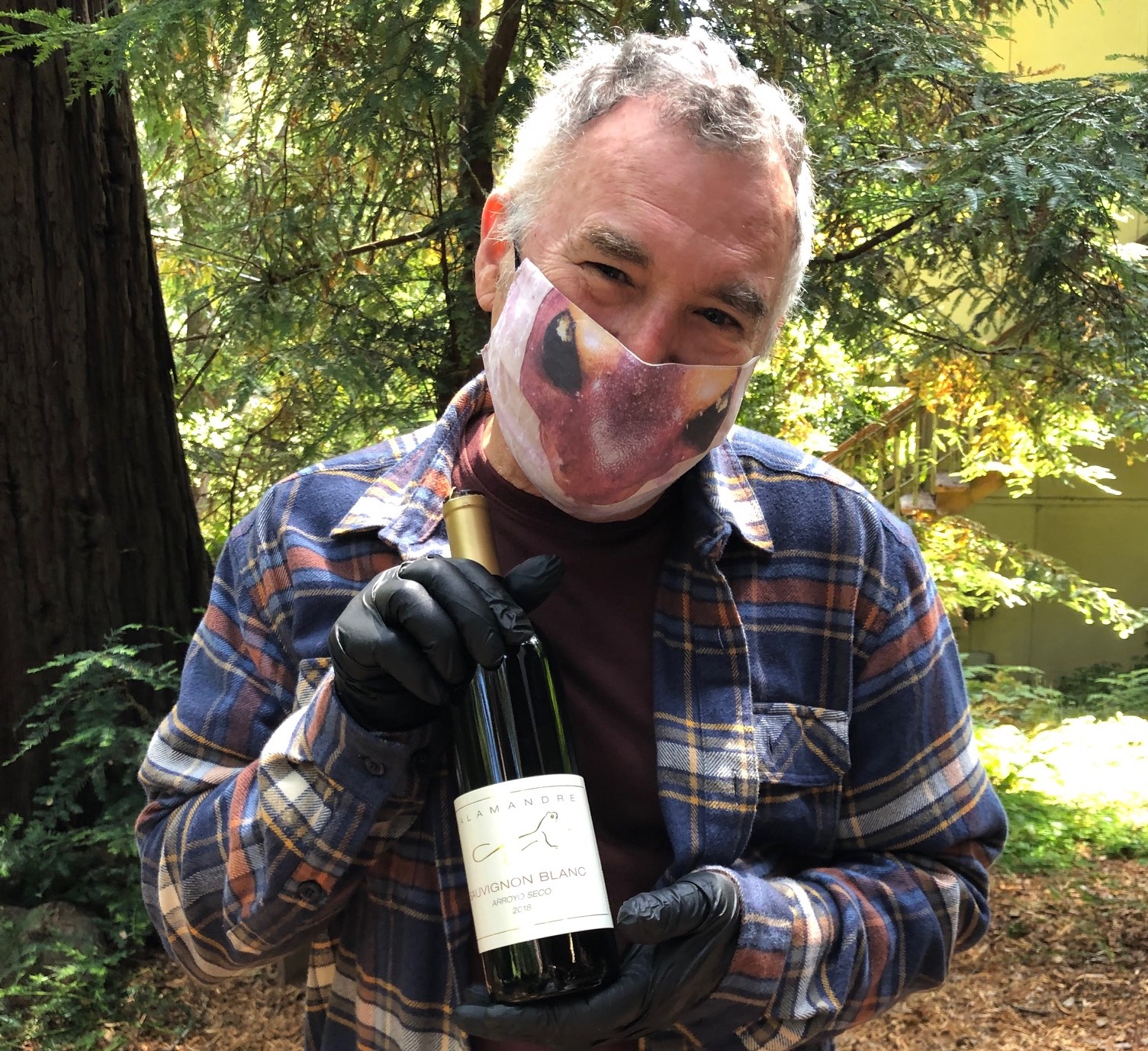 September 8, 2020 – For over 40 years now—as bonded winery number 800 out of nearly 5,000 in the US today—Salamandre Wine Cellars in Aptos has been quietly turning out wines of character, made by a couple of true characters and their merry band of outlaws, better known as dear friends.

Winemaker Dr. Wells Shoemaker, a pediatrician, and his intrepid wife Sandie, are lovely hosts in this pristine little spot shoehorned into old growth redwoods just outside of Aptos village. It’s where they’ve lived and raised their two daughters, surrounded by ferns and rhododendrons, with streaks of occasional sun lighting up the dahlias like stained glass on a dreary day.

A pediatrician by trade, a philosopher, poet and wanderer at heart, Shoemaker believes that wine is something to inspire and reward kinship. He puts his heart and soul into every wine he makes and proudly displays his purple harvest hands as he labors over yet another project—hand crafting wooden bowls. Although the wine world is replete with physicians of all sorts, he hasn’t much use for those whose hands remain ungrapestained during harvest.

Given to doing things the old-fashioned way, he has none of the equipment you would find at a fancier winery with a larger output volume. But what he does have are dear friends like Michael Bowers, who helped Wells pick grapes down in San Ardo and crush for many harvests in the late 1980s and 90s. “I first met Wells in 1985, when my sister-in-law invited my wife Susan and I to go with her to Aptos on a Passport Day. She loved the small wineries and still does to this day. We met Wells and Sandie and became friends. He invited me to help crush and his first rule was ‘safety first’ and the next was ‘keep it clean.’ I learned a lot from him and from his vineyard managers through the years.

Spend a day picking grapes and when you have a bottle of wine that night, you will really appreciate it in a completely different way!” he says.

Although the winery initially made most of its wine for wholesale accounts, over the years, the merry band of supporters has grown, and they now do most of their sales on quarterly Open House days.

We recently attended Salamandre’s first COVID Open House of 2020 and were delighted to try their entire lineup, which has always been an eclectic mix of varieties from local vineyards.

It’s always chilly here, which makes the reds taste extra special, although the 2018 Arroyo Seco Sauvignon Blanc was keenly grassy and savory, with a big smack of gooseberry. Loved the Arroyo Seco Pinot, with racy herbs and red fruits that made me think of beet salad with basil and burrata.

The 2017 Petit Verdot from a vineyard in southern Monterey shows the purity and subtlety of this varietal, typically relegated to the role of blender. Its main purpose in life is to create a plushness, to add a platform of depth to its brother Bordeaux varieties. Truthfully, it acts much like a carpet pad. But here, its black raspberry fruit and svelte tannins create a wine that is attention grabbing, perfectly round and flowing on the palate, with a tight core of acid.

This isn’t easy to pull off. I’ve had maybe two other 100% Petit Verdot bottlings in the past that got my attention the way this one did. Generally, Petit Verdot tastes amazing as a barrel sample, but then somehow loses its verve, giving way to texture and weight. Not so here.

If you love late harvest whites, the Salamandre Sauv Blanc Late Harvest 2011 is simply exquisite. Pair with dried apricots and figs and some aged gouda or Grana Padana.

If you’re wondering where the winery name came from, it’s an homage to the rare and endangered Santa Cruz long-toed salamander that still picks its way among wet leaves and rivulets during the rainy season, returning to its birthplace ponds to give life to a new generation. They are ancient creatures, focused in their will to keep the breed alive, disturbing nothing as they make a slow, determined journey through their unique lifecycle. We can drink to that.