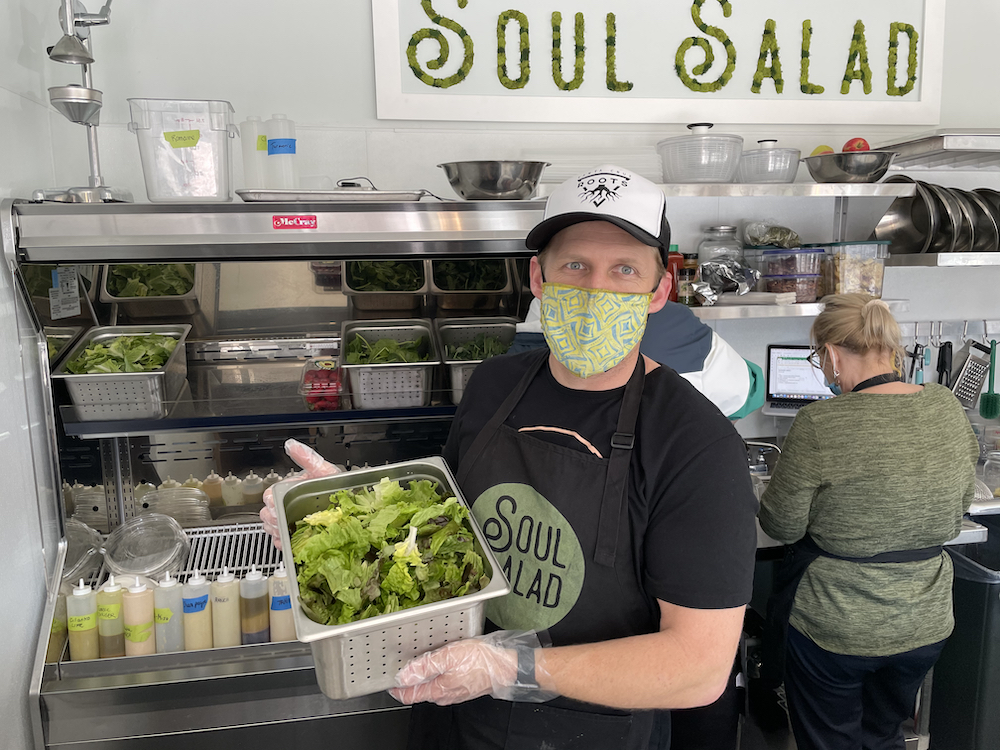 March 16, 2021 – Not many people can keep their restaurant dream alive through three long years of delays, but Jeff Hickey is about to see all his struggles come to fruition with the opening this week of Soul Salad in Aptos.

From initial gridlock over PG&E installation to the pandemic to the recent snowstorm in Texas, which delayed delivery of outdoor furniture, he has seen it all.

“I don’t want to look backwards anymore,” says Hickey, admitting he would go home in tears many nights after working on the build out. The first-time restaurateur was formerly a project manager for high-end residential construction, but had always dreamed of opening a casual restaurant or coffee house.

“Maybe I was naïve thinking my residential construction experience could translate into building a restaurant, it didn’t,” he says. Navigating all the requirements for a commercial kitchen and the ADA-compliant parking out front were some of his biggest challenges.

But after soft openings for staff training over the past couple of weeks, Soul Salad is ready for its official ribbon-cutting ceremony, followed by a Grand Opening on Thursday, March 18. Hours will be 11:30am to 5pm Thursdays through Mondays to start.

The concept is simple, 13 different salads with house made dressings to match, all assembled fresh to order and all 100% organic.

The secret to each salad is a mixture of “Soul Salad Greens” prepared daily depending on what’s in season. “We pull each leaf from an actual head of lettuce, wash it and inspect it, nothing comes from a bag,” says Hickey, who likes a crunchy mix that includes little gem, red little gem and butter lettuces. All produce comes from Veritable Vegetable.

He credits his wife Leah DiBiccari with inspiring the restaurant concept. She works as an Occupational Therapist at Natividad Medical Center and has a health-conscious approach to food.

“She eats a salad everyday, so we developed and tested these recipes together over the years,” Hickey says. But it was on a vacation to New York City that the couple discovered salad restaurants, like Sweetgreens and Chopt.

“We were convinced that Aptos needed something quick and healthy like that,” he says. Conveniently his uncle had a vacant restaurant space on Soquel Dr. right next door to the fine-dining Persephone Restaurant, which is owned and operated by Hickey’s cousins.

The 780-square foot space—which used to be Sushi on the Run and before that a drive through dairy store—is set up mainly for takeout, but shares a peaceful deck with Persephone overlooking Aptos Creek.

As for Hickey, he’s looking forward to nothing but salad days ahead.