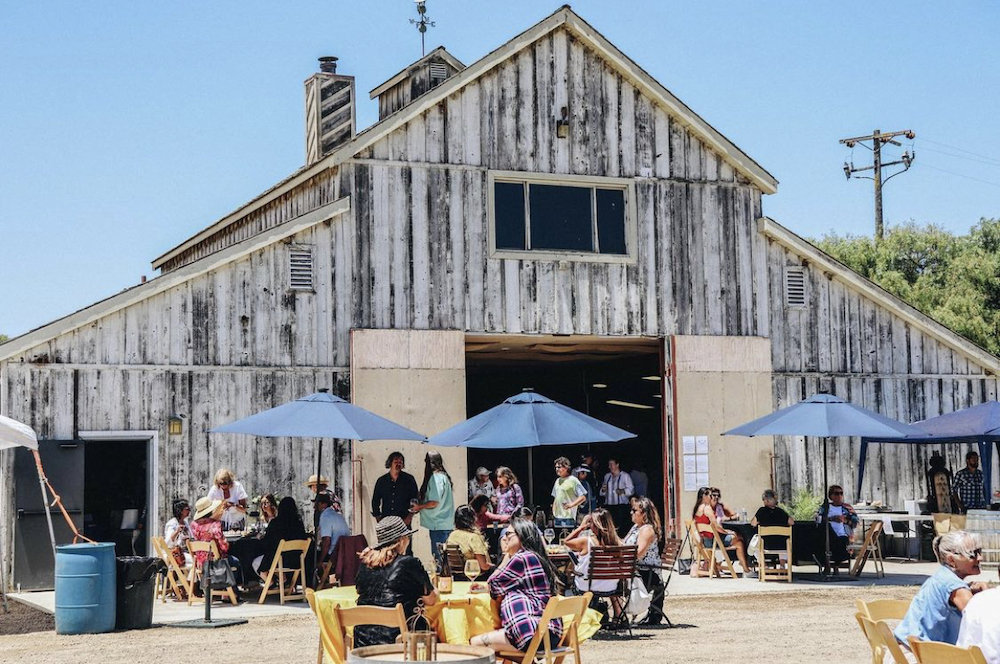 July 6, 2021 – You’ll find the new Rustique Wines tasting room down a road that winds through acres of row crops, like red lettuce, romaine, broccoli, cauliflower and all those good things you expect to find in the Salinas Valley, the Salad Bowl of the World. Here, you’ll find a lovingly restored barn, originally built in 1919 by the Sargeni family who moved here from Switzerland to run a dairy, much like the Boekenoogens. And like Franscionis and Pisonis, the Silaccis, eventually found themselves planting vines. Today, on the 1,100-acre Sargeni Ranch, there are 22 acres of Chardonnay and Pinot Noir, some of which are own rooted, having come from nearby vineyards.

Young Chad Silacci, who graduated from Washington State University in 2020, after studying viticulture and oenology and working in several wineries there (among them Morell-Lawrence, a custom crush in Walla Walla and Brothers in Farm, a consultancy in Red Mountain) says his great grandmother on his father’s side was a Sargeni, which is how the Silacci’s came to own the Sargeni Ranch.

Rustique is named for Chad’s late mother, Rusti Lee Silacci, a grade school teacher who taught a love of biology to her students—and her children—for nearly three decades before she passed away from cancer in 2019.

Chad’s Dad, Robert Silacci, had been involved in the Salinas Valley wine scene since 1991, working with various neighbors planting vineyards and working with wineries, including Cloninger Cellars. During that same time he began buying into the Sargenti Ranch and by 2014, had bought all partners out. Robert began planting the Silacci Vineyards in 1999, and worked with UC Davis on rootstock trials.

“My parents were always into wine,” says Chad. “In fact, my family has a few wine connections.” One of his relatives, Fred Garbini, was making Zinfandel during Prohibition in Gilroy, and his cousin, Michael Silacci, is the winemaker at Opus One, and is credited with being the brand’s first solo winemaker. Those are some big shoes, or perhaps more fitting, wineglasses, to fill.

The Silacci’s personal wine brand was launched by Chad’s parents in 2006. “We’ve had Five different winemakers since it started (Peggy Ryan, Tantara, Miura, Marilyn Remark and Odonata). Joel Burnstein from Marilyn Remark was making our wine when Odonata bought the property, and since our barrels were already there, Denis took over at that point, in 2014.”

Chad credits winemaker Denis Hoey for getting him pointed on the path to wine. “I was in high school, doing a lot of surfing, and my Dad said, ‘Come on, Chad, do something! Check out this Denis guy.’ So I dropped by the old Marilyn Remark place, poked my head in and we hit it off. I thought it was super fun. He took me in as a harvest intern. By 2015, I finally got on the payroll! I was 20 at the time, and doing production.”

He admits he wasn’t really sold on the whole winemaking thing at first, especially looking at it from the production side. “I like crafting wood and using my artistic side. My Mom encouraged that. It took about a year and a half until that pivotal moment. It was early morning and we were rolling out 20 barrels of Petite Sirah, tasting each one and talking about the characteristics of each barrel, and how they would impact the final blend. I thought, ‘This is awesome!!’ It was such a beautiful morning: everything came together and I saw this—winemaking—as a craft. I was completely hooked!”

Silacci admits he’s been pretty hesitant to stray far from what Denis taught him, but one harvest, the very last batch of fruit coming into the winery was Mourvedre. He suggested maybe they do whole cluster instead of de-stemming. “Mostly because I really didn’t want to clean the equipment!” he laughs. “But it turned out beautifully! I admit it didn’t smell the best during fermentation, but it turned out really great!”

In the tasting room, which is open Friday through Sunday, from 11 until 5pm, you’ll find examples of their estate Rustique Chardonnay and Pinot Noir, all made by Denis Hoey with Chad’s assistance. This harvest, he hopes to make all the wines himself, and is also looking to source some Syrah to add to the mix. “I’m excited to be making a sparkling from the Chardonnay, so we will have a Blanc de Blanc,” he notes.

They need to replant some of the original Pinot Noir, so part of the vineyard is fallow. Currently, Pinot Noir clones include 828, 667, 777 and those infamous suitcase clones sacred to the SLH. The Chardonnay, which was originally planted by Tom Russell of De Tierra, who was a partner with Chad’s Dad, remains a mystery. Russell planted the original 1.5 acres of Chardonnay and 1.5 acres of Pinot on the ranch. “We took over the vineyard after Tom passed away,” says Chad. “It’s the only Chardonnay we have. We farm another 3.4 acres of Pinot Noir, and the rest of the fruit is sold.”

Asked if he’s considering planting additional varieties or sourcing them, he says just the Syrah for now, but he did make Grüner Veltliner with some friends last year and loves that grape. “I like that it’s low alcohol and low acid and perfect for a hot day. You don’t have to work your mind too hard.” He also loves Riesling.

But for now, he wants to dial in the wines they’re already making. As of 2020, they are at 300 cases annually, but he hopes to increase that to 600 or so in 2021. The brand will remain primarily direct to consumer, with the help of his sister Sara, who runs social media and marketing from her home near Sun Valley, Idaho, where their late Mother is from and where the family loves to go skiing.

Are his friends into beer or wine? ”Most of my high school friends are more into beer, but many of them have come by the winery, since we opened. I bring different things for them to try. It’s great to see how wine brings people together.”

He hopes the barn, with its mix of tasting bar and tables inside and out, will draw more neighbors in, with its rural vibe and family feel. “Eventually, we want to have food and music, and do events, but for now, we just want people to come and try the wines, bring their own food, and enjoy the place and the history.”

Eventually, he hopes to build his own winery, but for now, he’s grateful for the relationship with Denis, and will continue making wine at Odonata for the foreseeable future. For both, this is a beautiful partnership that has already brought so many blessings.

Rustique Wines is at 1010 River Road, Salinas and is open Friday through Sunday, from 11am—5pm.  rustiquewines.com