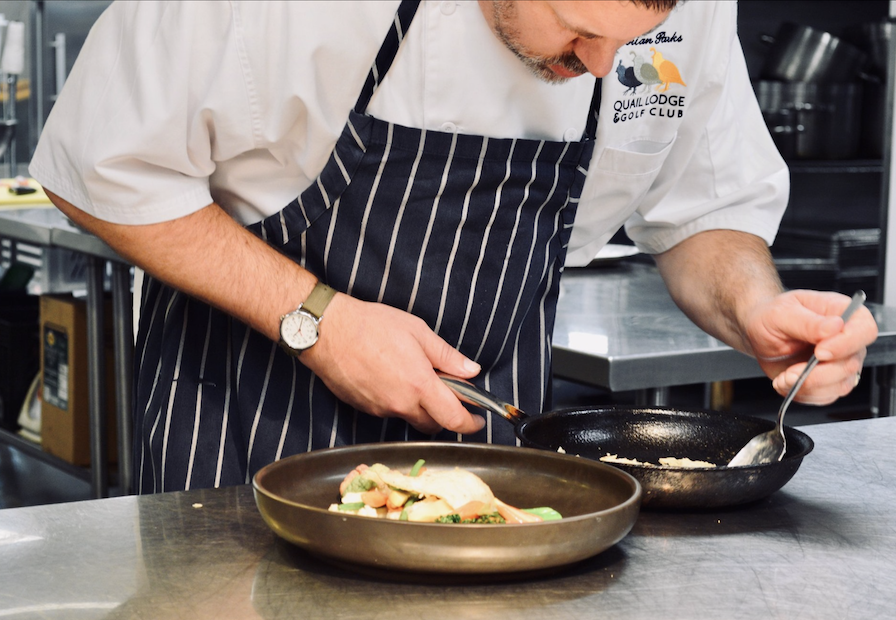 March 17, 2020 – The other day an old friend asked me what good might emerge from the current coronavirus crisis. In so doing, she hit on one potential positive: a chance to slow down, stop, think, reflect and count blessings. It turns out there’s nothing like a pandemic to help us realize how many friends, freedoms and conveniences we take for granted—not to mention our general health.

I put the same question to the president of the Monterey Bay Chapter of the American Culinary Federation, Soerke Peters. His immediate reply wasn’t so sunny side up.

“I don’t see any positives,” he said. “It’s costing me a fortune. No customers are coming in, and I don’t want to say to people, ‘Keep going out to restaurants.’”

When Edible reached him, Peters was in the the process of shuttering his Carmel restaurant, Etats-Unis French American Bistro, for the foreseeable future.

“Once payroll exceeds net income, you’re in trouble,” he said. “It’s difficult to make money in restaurants on a good day, with labor rates going up and margins shrinking. We rely on tourism in Carmel. It’s our bread and butter. If you don’t have that, good luck.”

He did offer a tangible solution: new pickup and delivery service at his other restaurant, Mezzaluna on Forest Hill in Pacific Grove, will start Wednesday, March 18. Peters’ team will offer both prepared meals and pastas and sauces for customers to cook themselves.

He joins a slew of restaurants, from Alderwood to Alvarado Street Brewery, pivoting to a greater emphasis on take out, curbside pick ups and delivery.

A final takeaway from Peters: ACF’s Chef of the Year Gala, which is slated to honor Bert Cutino in June, is suddenly in doubt. At a Monday press conference President Trump estimated the fallout of coronavirus will stretch into July and August.

That reflects an ominous reality in the era of coronavirus: uncertainty has become our greatest certainty.

One sure thing: Food Bank for Monterey County, which covers an expansive 3,200 square miles and supports 160 pantries, will be on the front lines. Executive Director Melissa Kendrick describes the recent surge in service demand as “well beyond an uptick.” Today alone the Food Bank distributed 1,500 bags of food at three different school sites. Kendrick estimates at that pace, they’ll exhaust their reserves in two to three weeks.

“We were beyond capacity already,” she says. “The need is crazy.”

She lists grim stats including a homeless student population that’s larger than San Francisco’s and San Jose’s combined. “It definitely afflicts the vulnerable disproportionately,” she says. “We don’t want anyone to be susceptible to corona because they’re sick due to hunger.”

The Food Bank’s challenges are further complicated by the fact its volunteer corps is composed primarily of seniors. But Kendrick insists her staff, given enough support, is up to the task.

“It’s a lot to take in,” she says. “I go to bed a pessimist and wake up an optimist. But if we can get the financial resources we will provide the services. We’re committed to doing it, but we can’t do it without help.”

Donating is straightforward and easy at foodbankformontereycounty.org/. (Here’s hoping closing restaurants can donate perishables to FBMC.)

Another sure thing: things will continue to change, and change quickly. This time last week, Pebble Beach Food & Wine officials told me that, while they were not taking anything for granted, sales were up 22 percent year-over-year and they were proceeding “full steam ahead.” Four days later PBFW was canceled outright, joining a tidal wave of major event closures including South by Southwest and the entire two NCAA March Madness tournaments. Locally the cancellations (or, to more optimistic parties, postponements) include the Sea Otter Classic, which draws a crowd nearly the size of Monterey’s population, The EG Conference and several farmers markets.

Other blockbusters likely to be canceled await just around the calendar corner: Cali Roots, which typically draws around 13,000, and Car Week, which brings in several times that—and more than $50 million in spending.

Last week, the Monterey County Convention and Visitors Bureau was counseling calm, noting the CDC described the threat as low, and pointing out there were no travel restrictions yet in place. “What healthcare officials and travel organizations continue to emphasize is the need for perspective,” President and interim CEO Rob O’Keefe wrote by email.

Flash forward a week and a whole new paradigm is in place. O’Keefe admits a statement that MCCVB is readying for release has been “written and rewritten” repeatedly “due to consecutive waves of new news.”

In collaboration with the Monterey County Hospitality Association and the region’s chambers of commerce, the statement seeks, per O’Keefe, to “collectively monitor developments and impact” and “to share resources and ensure consistent communication with businesses, hospitality workers, residents and elected officials.”

When the time is appropriate, he adds, the coalition will also “move in a unified fashion to recover as thoughtfully and quickly as possible.”

“There have been a lot of questions about the financial impact,” O’Keefe says, “and we are modeling possibilities but don’t have anything yet.”

In a special message to readers today, Good Food Jobs cofounder Taylor Cocalis described the sheer velocity of change succinctly. “The context of our lives is shifting so quickly that when it used to seem feasible, even prudent, to imagine the week ahead,” she wrote, “now it seems frankly impossible.”

Today, March 17, Downtown Dining decided to close all three of its restaurants (Montrio Bistro, Rio Grill and Tarpy’s Roadhouse) despite hoping as recently as yesterday that the eateries could manage to provide enough space between customers and deliver a limited menu.

Downtown Dining operating partner Tony Tollner says he’s been on the phone “24/7” with his team trying to organize a proper response while organizing a communication grid among staffers and distributing restaurant inventory among workers.

“What’s so scary is not only our individual personal safety and health,” he says, “but what it’s going to mean to the world. This is not a local or regional or national thing. It’s a f—king world thing. It seems like every other moment, someone says, ‘Well, what about this?’ And I’m thinking, ‘Man, I didn’t even consider that.’ It’s a mind-bending experience just trying to stay current.”

He does pause to register an uplifting note. “I have been in constant communication with all of my managers,” he says, noting a 12-person video conference. “And I’ve been blown away by the level of professionalism and dedication they show. I knew they were good, but with the chips down they’ve been simply amazing. I’m guessing that story is being born out everywhere in America.”

Wine lovers will find some consolation in the fact that vineyards and wineries are well-prepared for COVID-19, as Monterey County Vintners and Growers Executive Director Kim Stemler points out.

“The wine is going to continue to be made,” she says. “Wineries, by the nature of making wine, have to be clean. You never want any unintended elements in your wine, so they’ve extremely good at implementing cleanliness practices.”

While wine will be available, a number of tasting rooms have already closed, I. Brand & Family Wines and Morgan Winery among the growing group.

At the same time, others are opening for pickup only—think wine shop opposed to tasting venue—and a handful are arranging private tastings by appointment. (A call ahead is advisable.) Stemler adds that California Association of Wine Grape Growers and The Wine Institute have told her more explicit rules on how wineries should function within legal bounds are expected from the governor’s office this week.

“It’s a confusing time,” she says. “We don’t have anything to go by. It’s just hard for everyone. One of the things I emphasize is the winemakers live here. They’re family-owned. They grew up here, and care about the land, their employees and their community. We’re trying to be responsible and determine best practices, and we’re trying to balance taking care of employees and taking care of the community. It’s like putting together a puzzle without all the pieces—or knowing what the big picture is going to look like.”

Carolyn Rudolph owns Charlie Hong Kong with her husband, as she has for 22 years. She shared her thoughts not long before Santa Cruz implemented the shelter-in-place decree Monday afternoon—and as she was receiving notice from DoorDash that it was waiving commissions for restaurants.

“I would like to offer food,” she said. “Our restaurant is open air, it’s easy to social distance, we already have a strict health code that we’ve doubled down on.”

Furnishing high-value, high-nutrition, organic-driven food like spicy garlic tofu bowls is more than the family business (her son manages the restaurant), she added, it’s a calling that takes on added meaning in challenging times.

“Serving people healthy food is my spiritual practice,” she says. “When you’re under stress you need healthy food.”

By the next day, she reluctantly made the decision to go completely pick-up and delivery from noon-9pm. But not before sounding an important hope.

“It’s possible to view adversity as an opportunity,” she says. “To look at it with curiosity, [asking] ‘What’s happening here? What does this mean? How do we hold that? What can we offer?’”