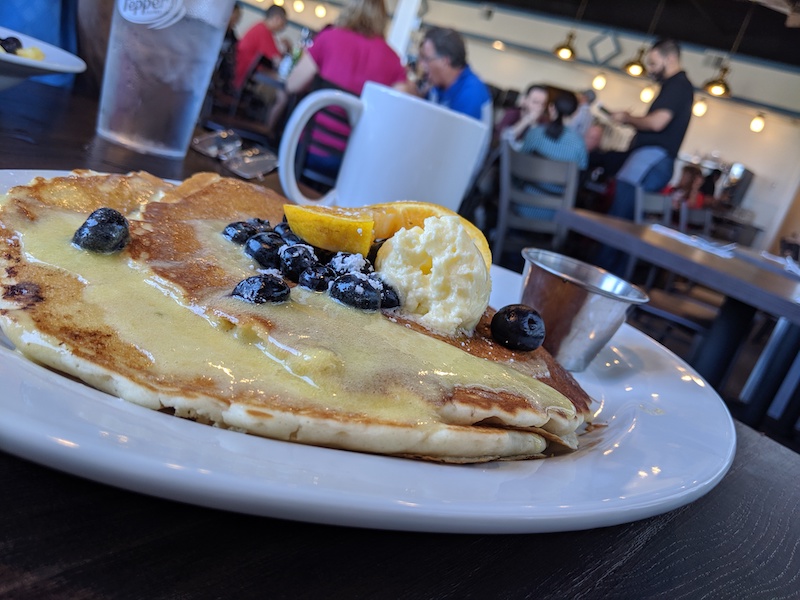 September 3, 2019 – The menu at The Butter House reads like a road map to creative comfort food, with Polynesian-Filipino pop—pork belly and eggs, fried chicken sandwiches with avocado, loco moco in a lake of gravy, butter-fried rice with bacon, sausage and Spam.

The new look at the former Nifty 50s Cafe is a trip itself. Gone are the funky booth fabrics, the greasy kitchen, the dated carpet, dated paint, dated countertops, replaced by a simple and smart design, stylish and shiny new counters, clean lines, fresh paint, new floating light boxes on the ceilings and nice finishing details around the sizable room.

The copper light fixtures hanging above the window booths, though, are still there, a holdover from the Sizzler era way back in the late ‘70s and ‘80s, all polished up. Better yet, other fundamentals remain intact: local loyalty and an understanding of Seaside.

Owners Susan and Benny Mosqueda are longtime locals. In fact, one of Benny’s earliest jobs in restaurants came as a dishwasher at the Pacific Grove Sizzler (now an In-Shape) at age 14; he would go on to buss, wait tables, design websites and manage marketing everywhere from Fish Hopper to Crown and Anchor, where he met Susan, who was the GM. (Last week Benny revisited his dishwashing game when a staffer called in ill. “It’s gotta get done,” he says with a happy shrug.)

One reason the opening hasn’t been as insane as many restaurant debuts: The Mosquedas hired Nifty 50s workers who wanted to stick around and hand-picked other locals with loads of hospitality experience. They understand Seaside isn’t a dinner destination, but loves its rib-sticking breakfasts. (Note the ribeye steak and eggs and Benny’s Benny with a spicy sausage patty, bacon and white cheddar.)

One of the biggest endorsements they’ve gotten—beyond lines out the door not long after the soft opening last month—is the ongoing attendance of the Seaside old guard who made Nifty 50s their regular rendezvous long ago. Community organizer Helen Rucker, City Councilman Dave Pacheco, Mayor Ian Oglesby and company still come in as many as four times a week. That kind of consistency and their specific orders inspired the Mosquedas to program dedicated buttons on their register for what they want.

On Edible’s visit, the Seaside crew was there, seated in the area that doubles as the movie/projection corner for private parties or meetings. So were the Mosquedas, visiting tables, keeping an eye on coffee levels and expediting food from the kitchen. Near that part of the 2,200-square-foot dining space is a brand-new community table, underneath sconces that designer Ambrosia Construction rescued from Disneyland’s Haunted Mansion.

Both are clearly enjoying being open after a clean-up effort that consumed nearly three months, permit processing frozen by the government shutdown, and the reinvention of a place the outgoing owners let go to seed once they knew they would sell.

“It needed the reset button,” Benny says. “It was like one of those rescue reality shows.”

Even with a menu stacked with temptation—see also the S.O.S. with housemade gravy and The Elvis, a peanut butter-banana-bacon-honey sandwich—ordering was relatively easy because of the “Babbs” with applewood-smoked bacon, melted brie and green apple on grilled brioche, and the standout lemon curd and blueberry pancakes.

Both were hits, the Babbs for its harmony of flavor and texture, the pancakes for supreme moistness and pitch-perfect zing from a pop of lemon extract. Both are also representative of the Butter House recipe process.

“We would eat at home and mimic what we’d eat in our favorite restaurants from L.A. or San Francisco or Monterey,” Benny says, “toying with recipes, doctoring them up.”

Susan had a feeling she should start writing them down.

“I know that my husband is that good with food,” she says. “From the moment we met, he’s been feeding me and keeping me happy. I knew we had something.”

The response, she adds, has been rewarding, and helps them cope with the inevitable pitfalls.

“People enjoy flavor that’s homemade,” she says. “And that it’s from people who are just like those eating here.”

The fried chicken section of the recipe binder has up to 14 iterations, a primary reason the chicken and waffles is a top seller. (Also near the top: omelets, bacon and eggs, and the fried rice.)

A couple of thoughts resonate as much as the magic of the pancakes. They were observations that Benny, who greets and says goodbyes on top of circulating constantly throughout the restaurant, said to our party unprompted.

One thought came while he was describing some of the hurdles in bringing The Butter House to be. “We are living our dream of opening a restaurant. Don’t ever do it,” he said, but his smile told a different story.

The other came as we headed for the car, and might be the number one reason to recommend this place: he and his wife’s personal investment and hands-on presence.