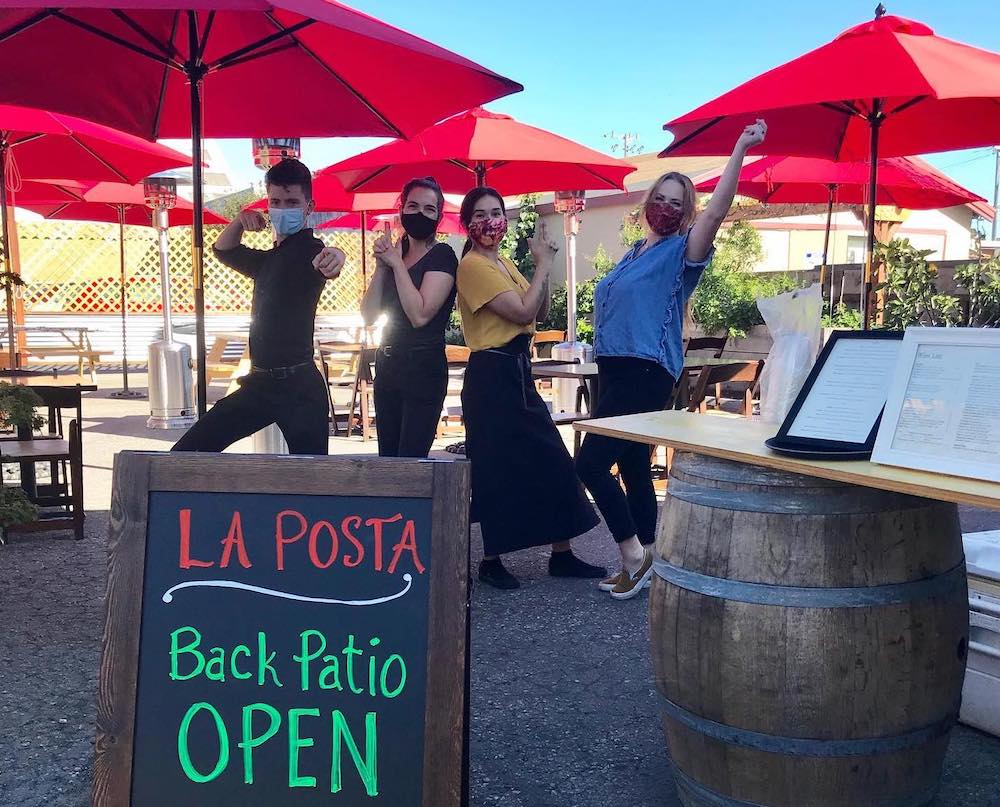 June 15, 2021 – It’s not a holiday. It’s not your birthday. And it’s not the end of COVID. But it is Reopening Day in the Golden State, which—given how long the anticipation has lasted—deserves capital letters.

For those emerging from 5G-proof bunkers, today was the date set by Gov. Gavin Newsom as the day for removing capacity limits and physical distancing in bars, restaurants, concert venues, grocery stores and beyond.

Patrice Boyle, who owns and operates popular spots Soif Restaurant + Wine Shop in and La Posta in Santa Cruz, disagrees on how to categorize today.

“Every day is a holiday in the restaurant business,” she says. “You can quote me on that.”

She keys in one COVID-produced positive: That the ongoing pandemic provides a reminder of how much we took for granted. Boyle has basked in extra servings of gratitude from her clients, and lists that as the main thing she hopes they bring to Reopening Day and coming days.

“They have been really generous, supportive, patient, happy to be out, and happy to be enjoying the food and each other,” she says. “It would be great if they kept doing it.”

When we spoke she was sitting on the patio at La Posta, which points to another positive: the maximizing of exterior seating.

That affinity for outdoor dining—combined with a labor shortage that continues to trip up operators—has helped simplify reopening ambitions at both of her eateries. Instead of doing more indoor seating, she’s sticking with less seating and more fresh air.

“We do get requests for inside, but overwhelming support for outside,” she says. “Everyone loves patios in the streets and parking lots: I have not met one person who doesn’t want to see that continue in Santa Cruz.”

Her staff will continue to wear masks. That reflects a choice that varies property to property.

Understanding customers will tire of rules that shift place to place, the other thing Boyle is hoping returning customers bring is endurance, which we’ve all been practicing intentionally or unintentionally.

“If they can continue to be patient and know we’re all still feeling our way, and that the guidelines have been amorphous,” she says. “We’re just going slow.”

Restaurants and other venues have the authority to require everyone wear masks, trust customers to leave them at home only if they’re vaccinated, or—later in the month—implement optional vaccine verification.

“For customers it can be confusing: Mask off here, but not there, feeling safer there than over there,” she says. “We’re going to try to be patient too. Regardless of the difficulties of starting back up, it’s been a real joy to have people coming back.”

As staffing shortages continue, so does another shortfall, in product. Boutique butcher The Meatery in Seaside took to Instagram to post this message last week, instead of the typical Nashville hot chicken special or thick cut of brisket.

“Due to a nationwide shortage of proteins, most of our purveyor and local ranches are facing unprecedented time and financial hardships due to a high demand in water, feed, and transportation costs for their animals.

“Over the last year we’ve seen almost a 50 percent increase in costs.”

“As we’ve been keeping our consumer prices consistent even with the increases, going forward we will have a slight rise in our prices to cover our costs.”

Meatery owner Gina Nucci hopes restaurant goers can be amenable to that adjustment and different choices than were previously available.

“They’ll see different cuts than they did in the past, and restaurants being more creative to provide more with less,” she says. “If people can be more open-minded they’ll find new things they like.”

Andrew Brown is vice president for Northern California at The Chefs’ Warehouse, which sources specialty items from around the world for restaurants in the U.S.

He doesn’t want diners to think restaurants are taking advantage of pent-up demand to jack up prices. The reality is they’re dealing with price leaps. As demand rises, supply dips and labor lingers on the sidelines, he observes cargo ships charging up to six times the price to move goods across the Atlantic compared to a year ago.

“It’s the biggest challenge for restaurants right now,” he says, while acknowledging staffing is a major obstacle at the same time. “Tie that into the labor market, where workers aren’t coming back as quickly as they thought, and restaurateurs are up against a lot.”

A promising side effect there: Chefs’ Warehouse is steering its partner restaurants toward more regional and local suppliers. Meanwhile, Monterey Bay restaurants that rely less on far-flung providers won’t have to pass on the same price hikes.

Brown’s counsel for restaurant-goers on the occasion of the quasi-holiday starts with, “Get out and about.”

“Understand these restaurateurs and hotels haven’t been doing anything for more than a year, in an industry that doesn’t have the biggest of margins to begin with,” he continues. “They need our support now more than ever to help get them going again.”

Gabe Georis was born into the restaurant world, so he’s been in and around it his entire life. He opened Mundaka (now Pescadero) in 2009—amid The Great Recession—and later Barmel a door down. Like many, the pandemic is easily the most challenging thing he’s encountered over his career.

His plan with reopening finds a familiar logic: Protect staff, trust customers, hold onto lessons that were helpful in any health climate.

In other words, he won’t ask for proof for vaccination, but staff will still wear masks, “out of pure abundance of caution and respect,” which will also drive ongoing enhanced cleanliness protocols. He counts himself lucky for having outdoor space that was expanded amid the reopening tier progression that’s now been discontinued.

“Some people are ready to hug everybody, some want distance,” he says. “I try to read that and accommodate it.”

At Pescadero’s sibling Barmel, he’s not ready to swing back to one of the more packed social scenes in Carmel, choosing instead to stick with capacity limits and more elbow room.

“We’re trying to buffer more in general,” Georis says. “It’s a good thing. Most people coming in are done with this whole COVID thing, ready to go back to life as normal. But it’s definitely a dance. How do we keep everyone legitimately safe without being paranoid?”

While things beyond takeout went dark for restaurants for months, so did events held by the likes of the Monterey Bay chapter of the American Culinary Federation. But that didn’t mean they were inactive; instead they set about matching donations to fund underemployed back-of-the-house workers who qualified for assistance, raising more than $10,000.

When I last talked to ACF Monterey Bay Chapter President Soerke Peters, it was March 2020 for a piece titled “Restaurants, Bars and Wineries Scramble to Meet Coronavirus Crisis.”

He had just shuttered his Carmel restaurant États-Unis French American Bistro and was furloughing staff at Mezzaluna Pasteria & Mozzarella Bar on Forest Hill in Pacific Grove. When I asked him what positives might emerge from the pandemic, he was succinct.

“I don’t see any positives,” he said. “It’s costing me a fortune. No customers are coming in, and I don’t want to say to people, ‘Keep going out to restaurants.’”

Today, by contrast, he told me: “I’m great, couldn’t be better.”

I mentioned March. “It was a little grim there,” he replied.

He’s planning on keeping masks on his workers for at least 30 more days while trusting guests to behave appropriately without a mask requirement.

Through the ups and downs of the last 15-plus months, meanwhile, he has uncovered some positives, including more attentive hygiene protocols for restaurants and guests alike. But his voice picks up more joy when he gets into outdoor dining, which Mezzaluna didn’t have permits for pre-COVID.

“It’s been something seeing how our patrons responded to dining on the sidewalk and in a parking lot,” he says. “Our team, our guests…didn’t just find a way to make it work, we found a new way to enjoy Mezzaluna.” (The sidewalk tables persist; the parking lot seating is gone.)

“We discovered people really loved dining outdoors, and people were surprised by the demand in eating outdoors, which I doubted too with the foggy weather here,” Ammar says. “It attracted a much younger crowd. The demographics have shifted and people are loving it.” (He also nods to longtime Edible Monterey Baypartner/contributor Happy Girl Kitchen for pioneering parklets in P.G. nearly a decade ago.)

The Pagrovian City Council agrees and is waiving fees for restaurants on any permitted parklets, encroachments, tents or other outdoor arrangements through April 2022, when they’ll have the chance to consider another extension.

In Carmel, officials have extended novel outdoor allowances like parking spot seating 90 days from today. No word on if potential extensions are in the offing.

So the eat-out holiday-of-sorts season is here, and just beginning.

Here’s hoping, with enough patience, mutual respect and teamwork, we can extend it indefinitely.