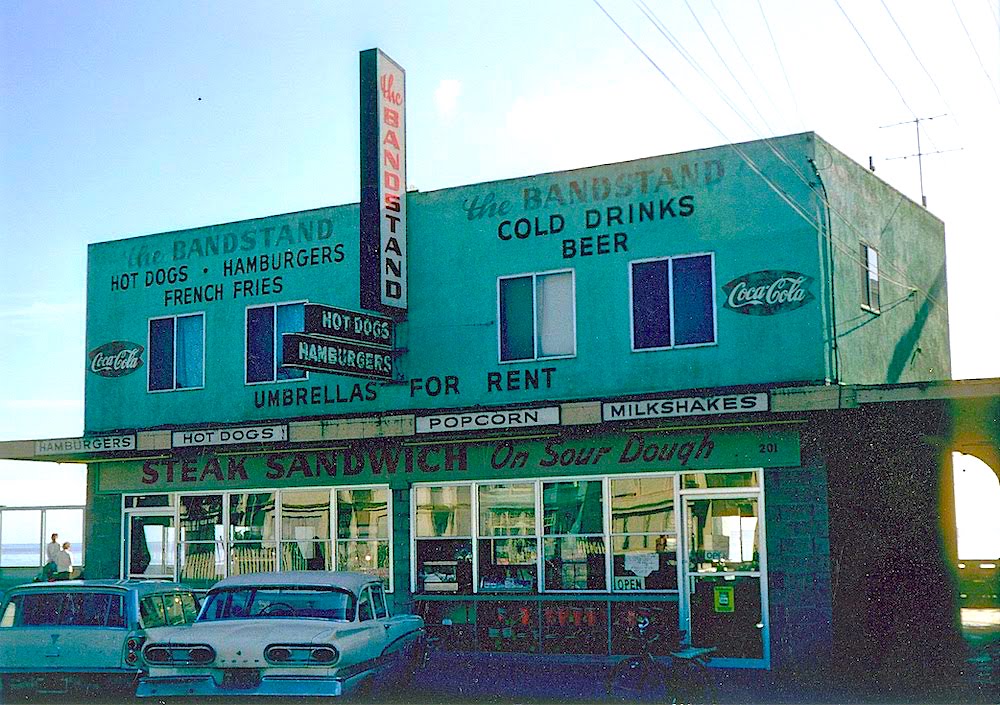 June 30, 2020 – It wasn’t just another job for Liz Pollock. She remembers vividly the days and nights working as the first female bartender for Adolph’s Italian Family Restaurant in Santa Cruz, 40 years ago.

Adolph’s is long gone — but readers can remember it, and many other long-gone local dining establishments — in Pollock’s new book, “Lost Restaurants of Santa Cruz County,” recently published by American Palate, a division of The History Press.

Pollock’s foray into history writing came about when she happened upon some information about rationing during World War II and she began to wonder how Santa Cruz-area restaurants managed with the food shortages and other restrictions of the era. It ended up becoming an 18-month project of researching and writing.

Pollock’s own history has been intimately intertwined with Santa Cruz hospitality. She fell in love with Santa Cruz in 1975 on a visit to see friends, and shortly thereafter transferred to UC Santa Cruz to study comparative literature. She stayed on in Santa Cruz, and decided to attend bartending school. She went to work for Adolph’s—a Santa Cruz staple since 1939.

Because it was close to the Santa Cruz County Courthouse, many judges, lawyers and even juries used to eat there, Pollock recalls, and it was also a popular place for weddings, banquets and service club meetings. “The portions were amazing, and so was the service,” she says.

Fast-forward to present day, and Pollock is now the proprietor of The Cook’s Bookcase, her home-based business, specializing in rare and out-of-print cookbooks and cookery and wine ephemera. She has continued to gather vintage keepsakes from local restaurants, collecting matchbooks, menus and ashtrays, as well as photos and other memorabilia.

So when it came time to put “Lost Restaurants” together, she had a treasure trove of visual material to draw on. But that wasn’t enough — she also interviewed 78 people, including former restaurant owners, chefs, waitstaff and other employees who recalled some of the highlights and history behind the scenes.

“It was like opening up a floodgate of wonderful memories,” says Pollock, who included everything from the New Davenport Cash store to the Miramar Grill in Watsonville in her salute to restaurants of yore.

The author also includes her recipes for cocktails of each decade, from the 1940s’ gin rickey to the 1980s’ tequila sunrise.

Her book takes the reader from the big-band era through the 1950s, when drive-in restaurants took advantage of America’s love affair with the automobile, through the 1960s and ‘70s when natural and organic foods began making inroads.

Pollock is especially fond of the interviews she had with Paul and Charlene Lee, who owned the Wild Thyme Café downstairs at the Cooper House. Paul would go on to become part owner of Whole Earth Restaurant on the UCSC campus, which used organic produce from the campus garden started by Alan Chadwick, and whose first chef was Sharon Cadwallader, who would go on to co-author “The Whole Earth Cookbook.”

The book continues recounting restaurant history up through the 1980s and 1990s, with special attention paid to the aftermath of the 1989 Loma Prieta earthquake, which did permanent damage to many small businesses and led to the demolition of beloved Cooper House.

Pollock also devotes a special chapter to the purveyors who served the restaurants, marveling at their ability to deliver the goods through thick and thin, from Paulino’s Bakery in Watsonville to Joseph George Distributors in Santa Cruz, which delivered beer and wine to restaurants.

“It was such a thrill to talk to them all, about the reasons why they got into the business and what fueled their passion,” she says.

Her research revealed how many challenges restaurants have had to endure in past eras, and the coronavirus pandemic is another hurdle for them to get over, Pollock says. Her original launch party for “Lost Restaurants” was supposed to be held April 4, and has been postponed indefinitely.

But she is confident that local restaurants will adapt and survive to the current crisis. It takes “courage and initiative to keep businesses afloat,” Pollock says, and if the past is any indication, today’s restaurants will find a way to move forward.

She’s happy that she was able to include Gilda’s Restaurant, which recently closed, in the book: “I’m heartbroken that it’s gone out of business…but I’m glad I got the stories in.”