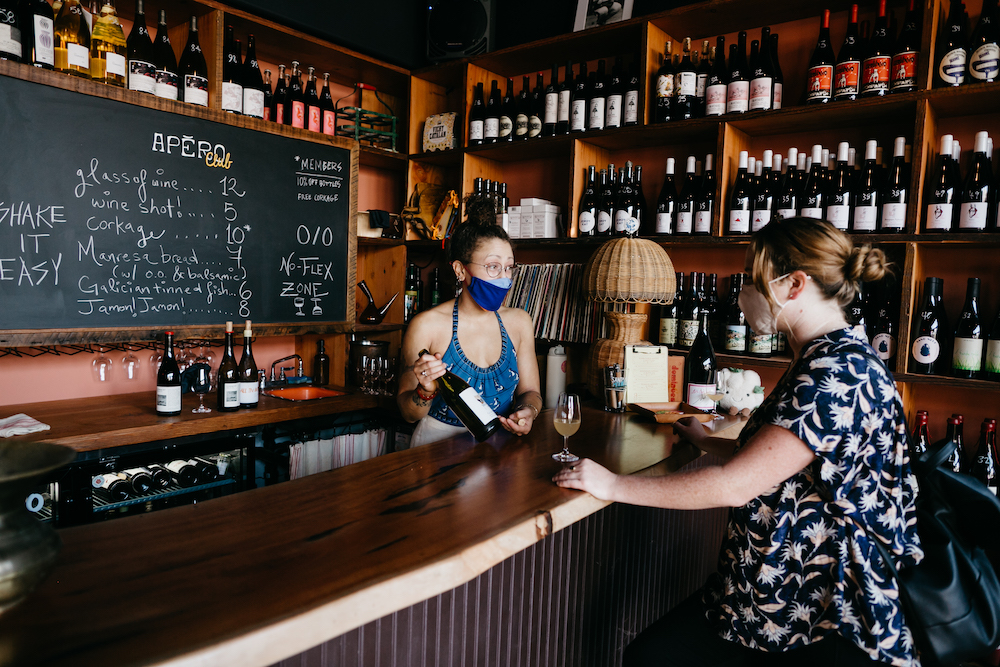 October 6, 2020 – Apéro is French slang for an alcoholic beverage served before a meal, formally known as an apéritif, but the recently opened Apéro Club in Santa Cruz expands the term to include community, connection and fun times.

“It’s that mellow, slower-paced time of day that’s pre-dinner, late afternoon,” says manager Kara Kellam Fowler. “In France, it’s the time when people would get together outdoors, have some wine and play pétanque.”

Sister to San Francisco’s hip natural wine mecca Ruby Wine, Apéro Club is meant to be a slower paced bottle shop and wine bar. Since opening in August, it has already attracted a lively scene of curious wine aficionados to its COVID-friendly patio, right next door to Santa Cruz Mountain Brewing in the Swift Street Courtyard.

Fowler credits their wine selection to artisan craft and an eclectic “vintage-dependent” nature that keeps the wine varied throughout the years. “These wines have personalities. Some are more pensive, some are fuel for dancing all night,” she says. “They’re hydration. We take them seriously, but we don’t want the experience of drinking them to be too serious.”

California wines at Apéro include its own brand (The Apéro Club Wine, created by owner Aran Healy), Santa Cruz-based Stagiaire, Absentee, and Sonoma Mountain Winery. “A lot of the wine producers are friends of Aran’s,” says employee Luke Mayeaux. “They are some of the only local wineries without sulfates, additives, etc. My brother and I are the co-owners of Stagiaire.”

Mayeaux is a former New Orleans butcher and handles the minimalist menu of food items at the Apéro Club. “We currently carry baguette from Manresa with olive oil and balsamic,” he says. “Because of COVID, we’ve been really careful about individually packaged items and not handling the food. We offer tinned fish from Donostia Conservas in Spain, sliced ham that’s portioned out beforehand and set on a cutting board, as well as some head cheese that is individually packaged.”

Most of the wines at Apéro are imported from Europe—selected on trips that Fowler and Healy make a couple times per year. They are organically farmed, fermented by native yeast found on the grapes and in the cellar and made without additives in the winemaking process. “As natural wines gain popularity, there has been some dispute over what the word ‘natural’ means,” explains Fowler. “We have a strict definition. Nothing is added to the wine and nothing is taken away. Just fermented grape juice.”

As a result, Fowler she says people may experience a lighter, fresher and slightly more acidic taste with their wines. “We think that they feel better to drink. They don’t weigh us down and we feel good the next morning.”

Apéro Club’s whimsical disposition can also be felt in the décor. “Everything in here is found,” says Healy, the mastermind and owner of Apéro Club and Ruby Wine. “All the hardware, the lumber; it gives the space a more lived in feel. All of the decorations in the shop are things that I’ve collected and found, some since childhood, others from recent trips. I like the idea of the shop having a personality similar to someone’s home. The things inside, represent the lifestyle and culture of the people who inhabit the space.”

A Santa Cruz native, Healy retuned to his hometown in spring 2019 to check out a few locations for what would potentially become the Apéro Club. To his surprise, he ended up signing a lease immediately. “The idea was just that, an idea,” he recalls. “I didn’t necessarily anticipate signing a lease that day, but that’s how it happened!”

Apéro Club fits right in with the colorful array of wineries, breweries and gastropubs in the Swift Street Courtyard. “It’s really a special building; the near hidden location in the back of the complex,” says Healy. “And of course, the neighbors! This area of town has a grouping of some of my favorite small businesses in town!”

Although COVID threw a wrench in their opening plans, there has also been a silver lining. “It’s been difficult not having people drinking inside and enjoying the space,” says Healy. “Our new food program, along with the 25 percent capacity is definitely helping bring the vibe along. Since Covid slowed our opening plans, we were able to take the extra time and invest in making a lovely patio space out front. This has been a lifesaver!”

What would Healy and Fowler be doing with the Apéro Club right now in a COVID-free world? “We miss dancing!” says Fowler. “We dream of having our friends who are musicians and DJs setting up in the loft and playing for folks dancing and enjoying wine below. As Aran said, the space is meant to be lived in. And not just party vibes. I want to have poetry readings, art shows…we’d like for the space to be welcoming, inclusive, creative, energetic.”

Despite COVID delays, Fowler and Healy have already achieved the lived-in, chill apéritif vibe that they adore with the Apéro Club. Cheers to the continued pursuit of their dreams and Apéro Club’s fun-loving future.