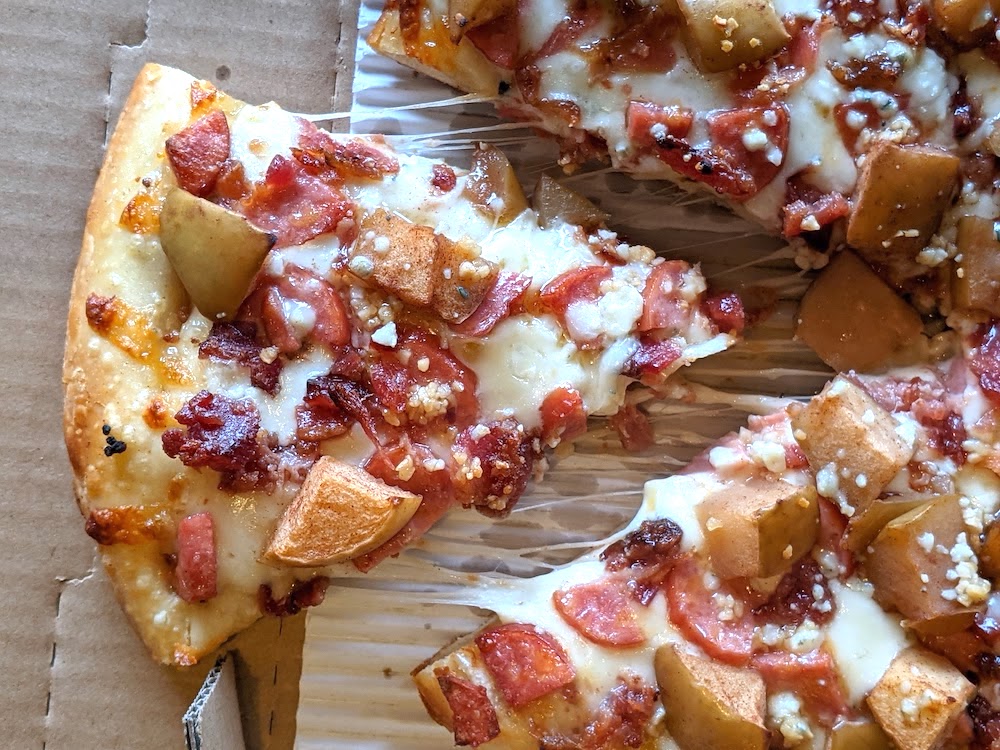 May 28, 2021 – A stranger snuck up behind me. When she spoke, her voice carried a conspiratorial baritone that demanded consideration.

“It’s my favorite pizza in the whole world,” she said.

Apparently she had been listening in on my conversation with the butcher. I wanted to know what signature item Corralitos Market and Sausage Company can claim beyond the cheesy Bavarian.

The veteran meat master said, cheesy Bavarian was the signature item, full stop. He went on to add there are around two dozen different sausages that they sell at a clip of around 50 pounds a week, but they go through 1,000 pounds ofcheesy Bavarian in the same time span.

Right then came a murmur from a passing butcher: “Twenty-five pounds of Bavarian.”

“Wait—someone just ordered 25 pounds of sausage?” I said. “Who does that?”

That’s when the woman volunteered her testimonial.

I drove directly from Corralitos to Pizza 1 at Aptos’ Seacliff Beach to try it.

Owner Mike Colombani stopped by himself after surfing the local break and liked the pizza so much he bought the humble little spot back in 2017.

“Next thing you know I own a pizzeria,” he says.

Making the dough daily and sourcing local produce help the pies shine. On a San Francisco-style sourdough crust with an adept amount of salt and garlic-infused olive oil, the Corralitos pizza is one of those flavor teeter totters that balances sweet and rich, melt and chew, zig and zag, salty and sour, with a starring role for the sausage.

It inspired me to write down “three-dimensional chess” in my notes—right before Colombani introduced me to triplet employees.

Pro tip: Get the smaller sized Corralitos pizzas, as the XL is always thin crust, as the thicker crust allows more texture and a sturdier foundation. There are a bunch of other specialty pizzas where #7 came from, like the Monterey (with fresh house-made pesto sauce plus multiple cheeses and mushrooms) or the Castroville (with marinated artichoke hearts, fresh spinach & tomatoes). A small curated list of craft beers and small-format wines accompany.

One of the keys to the pizzas: the Bradley Baking Oven in the back.

“It takes a little longer, but really cooks it well,” Colombani says. “We could cut our cook time in half with a more modern oven, but that’s not what we’re here to do. I’ve had high-tech technicians say never get rid of the Bradley. It’s my ’55 Chevy.”

In the end, I don’t know if what I found is the best pizza on the planet. But it’s a treasure very worth tasting.