August 27, 2016 – A new Mediterranean fine dining restaurant called Persephone is set to open in the next couple of weeks in Aptos. The 40-seat dining room—which once housed Aptos Pizza—has been totally transformed over the past nine months by chef Cori Goudge-Ayer and her family.

“Everybody is going to be blown away, it’s so gorgeous,” she says. “I get all giggly every time I go in because it’s so exciting—this is a dream come true. It’s what I’ve been working towards for 15 years.”

Gouge-Ayer was born and raised in Santa Cruz and went through the culinary program at Cabrillo College, just down the road from the new restaurant. She also studied at the California Culinary Academy in San Francisco before returning to Santa Cruz as opening chef at Laili and later Süda.

Joining her in the new enterprise is her brother, Alex Potter, who is studying to become a sommelier and will be the beverage manager. Her mother Karen Potter is the pastry consultant and has already developed a killer chocolate gelato, while her stepfather Miles Potter is the business manager.

Cuisine will focus on seasonal fare from local fishermen and produce growers, like Lonely Mountain and Nelson Farms in Corralitos.

“My background is in cooking Italian, Afghan and Persian cuisines so all those influences will be reflected in the menu,” says Goudge-Ayer, who admits to being obsessed with pomegranates.

Indeed, the namesake of the new restaurant—Persephone—was the Greek goddess also known as Kore. According to mythology, she was abducted to the underworld and ate the forbidden pomegranate seeds, giving the world six months of winter every year.

One of the dishes she hopes to offer on the opening menu is house made goat milk ricotta, with blistered padrón peppers, pancetta, pomegranate syrup, orange zest and mint oil.

Persephone will feature house made pastas and other Italian accented dishes, such as savory garlic-parmesan budino paired with seasonal vegetables; and chilled fennel soup with smoked salmon and dill oil garnish.

There will also be a cheese platter with a selection of handpicked local cheeses like Garden Variety’s sheep’s milk cheeses and Point Reyes Blue cheese.

The dining room includes cozy banquettes and a row of tables next to tall windows overlooking Aptos Creek gulch.

Persephone will start out by offering dinner five nights a week. “I’ve been involved in many restaurant openings and want to start with the minimum, until I’m happy that we have a strong foundation,” she says. “We’re focusing on quality over quantity.”

Eventually, they plan to expand to six nights a week and serve light lunches. 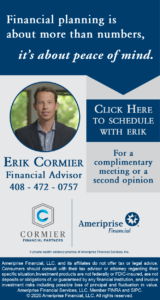