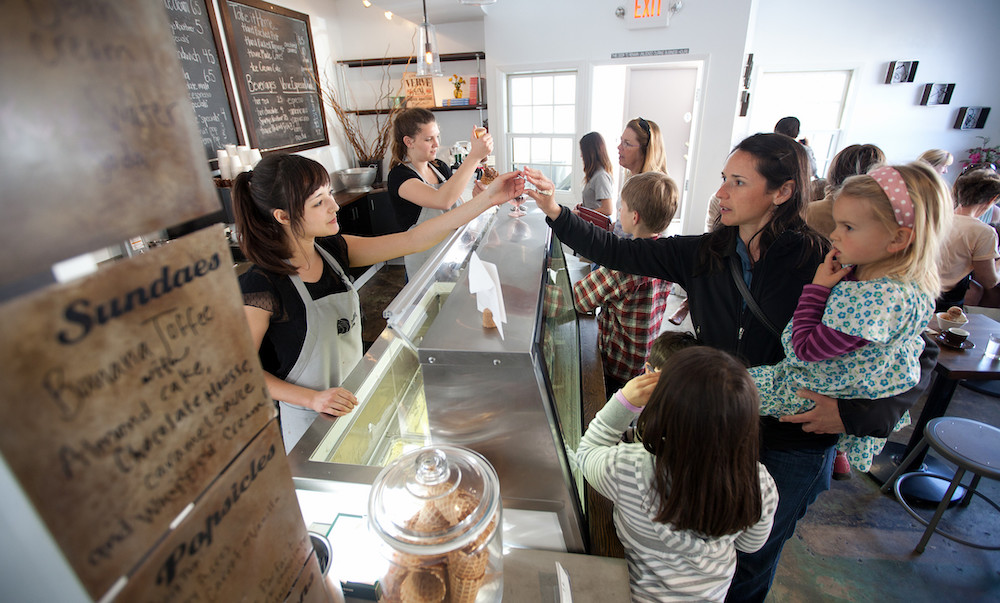 May 25, 2021 – Santa Cruz’ beloved Penny Ice Creamery will be opening a fourth store this summer in the new Hangar complex in Scotts Valley, bringing its organic, made-from-scratch flavors to the Santa Cruz Mountains.

“We already partner with some of the farms in the area like Abounding Harvest and we look forward to deepening our sourcing relationships in Scotts Valley,” says chef Kendra Baker, who founded the business with Zachary Davis.

The new shop will feature indoor and outdoor seating, along with the capacity to make ice cream on site. They are working on the build out with Nielsen Studios and hope to open by the end of July or early August.

The Hangar complex is a new 12,000 square foot development on Mt. Hermon Rd. next to Skypark, which is nearing completion and will also include For Home by Zinnias and The Hangar Taproom and Grill.

Certainly the walkability to Skypark had a lot to do with selecting this location as well as the local roots of the other businesses in the project.

“I’ve spent many days at Skypark with my kids as they’ve grown up,” Davis recalls. “Meeting up with their cousins from down the street, launching model rockets; now I look forward to sharing a comforting ice cream with them when they fall off the monkey bars!”

As with their other locations Baker and Davis look forward to highlighting Scotts Valley with their hyperlocal sourcing. They are also anticipating collaborations with their neighbors at the Hangar Tap Room and Grill, due to open in the fall, where they certainly expect a stout beer float to make an appearance.

The original Penny Ice Creamery location is on Cedar St. in Santa Cruz. They have a shop in Pleasure Point and another in Aptos. The parent company, The Glass Jar, also operates The Picnic Basket and Snap Taco—which is expected to reopen in mid-June.