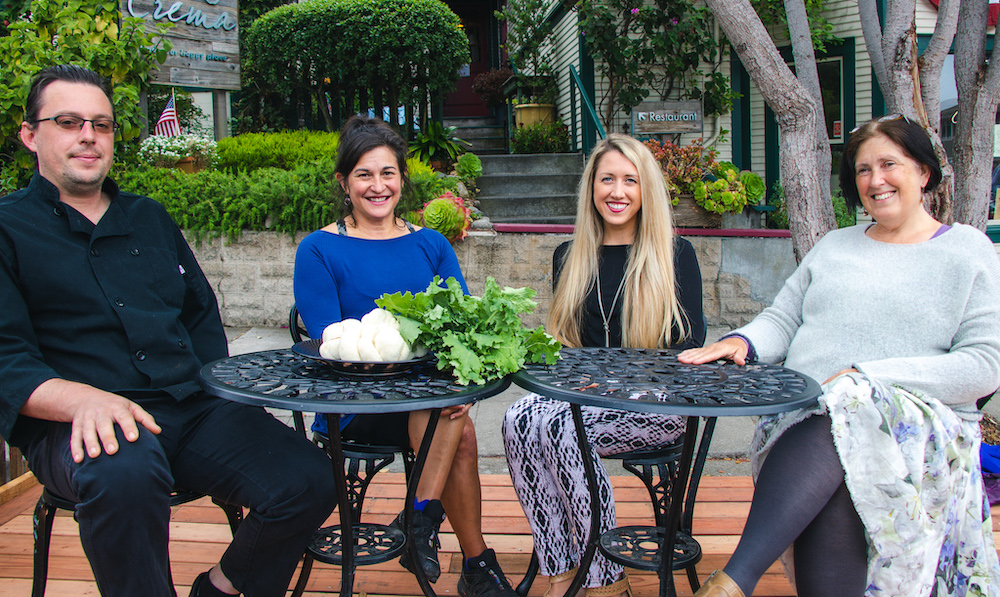 July 14, 2020 – When Gov. Gavin Newsom announced the closure of indoor service to slow the spread of coronavirus—for the second time—it was added fuel for change. Or maybe it was a spark that lit accumulating fuel that helped inspire the creation of the Pacific Grove Restaurant Association. (Indoor wineries, tasting rooms, movie theaters, zoos, museums and card rooms were also included in the order.)

“Restaurants are in such a hard situation,” says Rachel Thompson. She’s director of community outreach for Julia’s Vegetarian Restaurant and chief of the newborn PGRA. “We had been discussing forming a group and the tipping point was when the governor said indoor dining is shut down. We said, ‘OK let’s bring this to fruition.’”

The PGRA website went live Friday, when Thompson sent an email to city leadership introducing themselves.

“It’s a nonprofit organization aimed at supporting the restaurants and community of Pacific Grove with a long term vision of vitality,” the email reads. “It was created by local restaurants that saw an opportunity to work together to help sustain and grow their businesses while offering new experiences to the city of Pacific Grove. We believe that working together will create a vibrant future for our community.”

In addition to Julia’s Vegetarian, founding members include Wild Fish, Crema and its brand new sister restaurant, Lucy’s on Lighthouse, and they are in the process of inviting all the city’s restaurants to participate. It’s no coincidence that those restaurants were the most enthusiastic about short-lived P.G. Al Fresco.

P.G. Al Fresco was put in place by an emergency city order, closing two noncontiguous blocks of the Lighthouse Avenue to vehicular traffic so restaurants could use the space for distanced tables, live music and more. The resulting scene was atypically vibrant for sleepy Pagrovia, and response from attendees was positive, but the experiment was promptly terminated after a tidal wave of other restaurants, businesses and the P.G. Chamber of Commerce came out against it.

In the aftermath of a 6-1 City Council vote discontinuing the emergency order, talks of forming a restaurant group similar to the city of Carmel’s started to gain momentum. Council members like Amy Tomlinson called for such a group to brainstorm with P.G.’s downtown Business Improvement District (BID) and the chamber.

“I’d love for them to get together, collaborate, come up with an idea they want that’s fair, equitable and forward-thinking and present it to the city so we can approve,” she told Edible in June. “It’s on you. The ball’s in your court. Come up with a plan to help restaurants make it through this challenging time. The city is standing by to support and ready to approve what you come up with.”

PGRA memberships are free through the end of the year, with minimal dues taking effect in 2021. Costs for website construction were covered by donation. Thompson has volunteered to spearhead the organization as it gathers members and drafts bylaws.

She came to Julia’s after working in San Francisco and New York in event planning with the likes of celebrated chefs Eric Ripert, Alex Guarnaschelli and Scott Conant. At Julia’s she directs sales and marketing while steering participation in a new High Road Kitchen coronavirus-relief project that donates meals to low-wage workers, healthcare staff and first responders during the crisis.

“I’ve got a lot of ideas,” she says. “But the priority is collaboration: Let’s get some ideas going. Let’s present them to the city.”

Key to any lasting collaboration in the city will be buy-in from the powerful BID and chamber. The chamber’s longtime president Moe Ammar is all for it.

“We’re behind any effort that supports any business segment in our city,” he says. “We will work very closely with them and support their events and anything that helps restaurants, which are facing really challenging times.”

“The chamber is tasked with representing all businesses,” she says. “The association will focus on working with existing organizations like the chamber and the BID to specifically represent the unique challenges faced by restaurants and supporting them as the revenue anchors they provide for a community.”

“The single focus needs to be educating and working with the community to come up with the creative solutions that will help save the newer unique restaurants, thus helping our town to survive this economic downturn and come out stronger,” she says.

Ammar is happy with the progress local eateries have made in converting to outdoor operations, citing Passionfish’s new rooftop seating “as the most creative thing” he’s seen a restaurant do in a long time.

“If a P.G. restaurant doesn’t have outdoor seating,” Ammar says. “They’re working on it.”

Typically Pacific Grove’s restaurant and social scene can be described as somewhat drowsy. Triggered by the current crisis, it’s getting more spicy rather quickly.