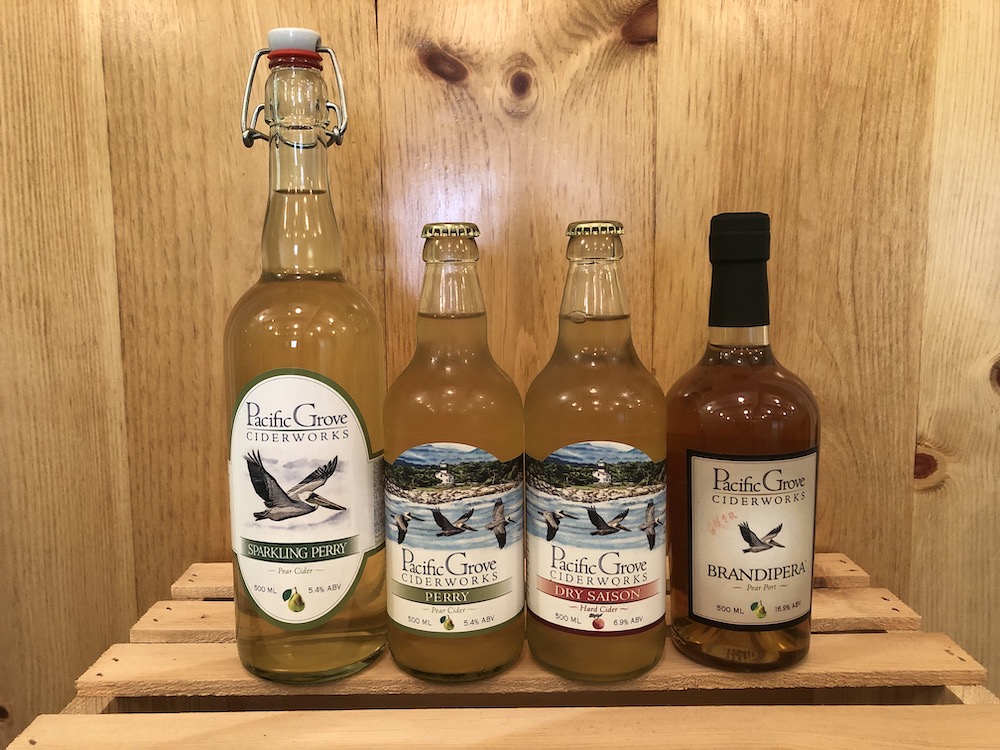 October 20, 2020 – A brand-new homespun operation has created an unlikely epicenter for hard ciders and pear-centric spirits not made anywhere else in the country: little ol’ Pacific Grove.

Even though its emergence seems sudden, Pacific Grove CiderWorks has been a long time coming.

As a kid, veterinarian Tim Calvert spent a ton of time in his family’s Placer County orchard in Northern California, where his great great grandpa had a cider press with which he’d make hard juice.

Three decades ago Calvert started experimenting with his own elixirs, while learning more about the underreported popularity of the beverage—he can cite historic precedents when cider was a huge draw before Prohibition knocked producers off their plan.

Three events led him from those early-on amateur experiments to a tiny-but-tidy 1,500-square-foot production space in blue-collar Russell Service Center, across the street from Hayward Lumber near Asilomar.

Event one: Calvert received acclaim and praise from everyone who tried his upstart cider, which he made in 5- and 10-gallon buckets in his kitchen with red and yellow apples from the family ranch, or Apple Hill producers between Placerville and Lake Tahoe that he came to trust.

Now he sources from the same family property and other private growers he’s met over years of web research, with 500 trees recently planted on an acre of the family plot to fuel his growing operation. A family spring with a solar-powered pump provides the water to irrigate the trees.

The product tests included 300 people who said “I do” to his pear champagne at a niece’s wedding.

“That was a hint I should get into it,” he says.

Event two: He opened a cider tasting bar as a passion project in Colfax, California, where the population is fewer than 2,000.

At Colfax Cider House, he stocked as many as 40 different ciders and hosted four or five tastings a weekend. At the time, the next closest cider tasting room was in Bristol, England, making his the only place of its kind on the continent.

“Having the tasting room was a wonderful education for me,” he says. Meanwhile he kept after his day job: Calvert estimates he treated 80,000 animals across 35 years as a veterinarian in multiple practices in the Sacramento and Yuba City regions.

At the cider shop he eschewed the sweet and shallow ciders that have given some domestic brands a bad name and stocked dry, European-leaning versions with depth and dimension. A traditional Scottish cider called Thistly Cross in particular reflected what he wanted to do.

“I could hardly keep it on the shelf,” he says. “It is made with a saison yeast that’s used in some beer production, but does something to cider really that’s really good. That shaped my downhill approach to making cider: I knew if I ever made a dry cider, this yeast would be in it.”

A final event (# three!): Calvert reconnecting with his El Cerrito High School sweetheart Christie Monson and moving to Monterey Bay, brings the CiderWorks story to a city he likes for more than romance and natural beauty.

“It’s a great climate for aging ciders and wines—it’s cool, with higher humidity, and that helps barrels stay nice and tight,” he says.

His limited space, outfitted with 300-gallon fermentation tanks and Brite tanks, means he has to be selective with his creations.

While he has some new small-batch experiments in the works, for now he’s focusing on current flagship items: a dry saison-style hard apple cider; a lower alcohol, lightly effervescent perry (or pear cider); and a two-year-aged, caramel-hinted, 16.9 percent ABV pear port called Brandipera. (Yes, a pear port, a unicorn of a beverage unique in the United States and maybe beyond.)

“What I dig most about [the pear port] is that it turned out good—there was no recipe or anyone who made it before who I could find,” he says. “I had to base it on how people make port, and there wasn’t a lot of information on how to do it. Now I wish I made 10 times as much.”

Prices range from around $8-$10 for the 500ml ciders to a premium rate for what might end up being $30 for a 500ml bottle of the port. (Prices are dependent on retailer preference.)

P.G. CiderWorks made its local sampling debut with last week’s Flavors of Pacfic Grove, allowing a chance to connect with local restaurants and shops who may very well up the PGCW visibility in a hurry.

Then, as always, local novelist Christie Monson—who contributes mightily to the business by connecting PGCW to local accounts and managing the brand narrative—enjoyed surveying reactions most. (Her “Menopausal chick lit with a supernatural twist” work is worth a look.)

“The thing that is so fun is when we’re doing a tasting and someone smells the perry or the port and they go from seeming bored to their eyes getting wide,” she says. “We watch their faces.”

Calvert also revels in giving new audiences that moment of discovery, on behalf of a beverage he believes is increasingly ready for its closeup.

“The cider industry has a long way to go, but it’s improving,” Calvert says. “That makes for an exciting time for cider in California: There’s so little cider and so many people who don’t know it yet.”