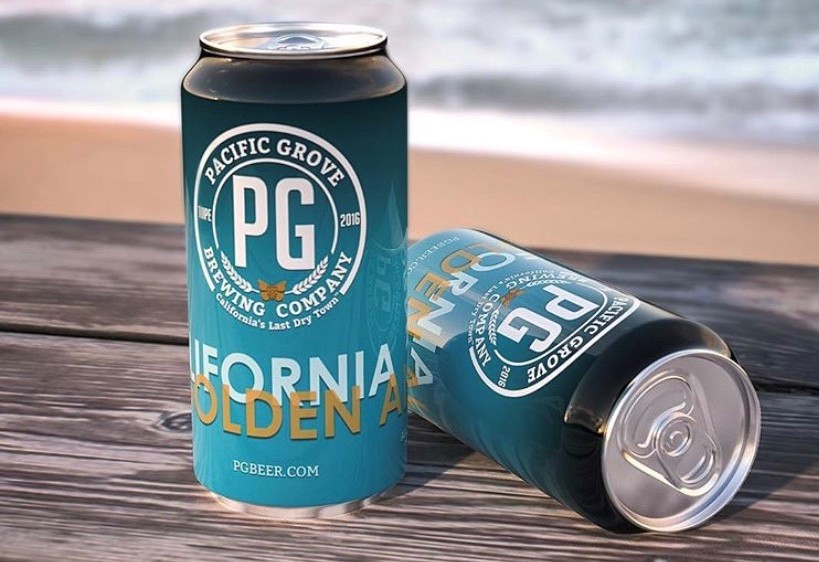 August 6, 2019 – An epic family photo appears on the Pacific Grove Brewing Company website, under the “Our Story” tab, tagged with the year 1975. Ten youngsters stand single file, lined up according to age, with lots of period-appropriate long hair.

On the far right of the photo, on the youngest and shortest end of the spectrum, stands little Charles Tope, age 3.

He’s not so little any more. After growing up around the family businesses—by 11 he was splitting wood with his brother’s Tope Tree Service in exchange for lunch—and starting his own Monterey-based staffing company Employ Net, he’s launching a new family business: beer.

“Family is a huge part of the genesis of the company,” he says. “When my brothers and sisters and mom and dad get together, wine and beer are usually flowing. We drink enough beer that I figured we should make our own. Besides, I always wanted to.”

When it came time for recipe review, he knew where to turn. “My brothers and sisters were my test subjects,” he says. “I wanted something light and refreshing, not so much for the beer connoisseur, but a clean easy-drinker for the everyday person.”

His niece Justine Tope leads business development, which means a lot of hustle getting the beer in front of restaurateurs, beverage directors, liquor stores and tastemakers.

The 5.2-ABV, 18-IBU California Golden Ale is available at more than 30 spots from Carmel to Morgan Hill by either tall can or tap, including Beach House at Lovers Point, Bruno’s Market & Deli and even The Pit Stop in Coalinga.

”It has been fun to connect with local businesses, many of which know my family already,” Justine says. “Residents of PG are excited that our small town has its own beer and brewing company.”

But the response is not her favorite part of the gig.

“Definitely the amount of time I can spend with family is the most gratifying,” she says. “We are all super tight so working with each other is like working with your best friends.”

If family is a primary source of inspiration, so is a sense of place. In fact, to hear Charles Tope tell it, they’re pretty much one and the same.

“Our family is synonymous with Pacific Grove—everybody knows a Tope,” he says. “It’s free marketing! Somebody always knows somebody who knows somebody.”

PGBC trademarked “America’s Last Dry Town” as a slogan to provide a nod to history—Pacific Grove was founded as a coastal Methodist resort in 1875, and was the last town in California to allow the sale of alcohol, in 1969—and a wink to locals.

“Native Pagrovians know the lights turn down at 6pm,” Charles says. “We’re trying to keep them on till 10, if you will.”

Pacific Grove Chamber President Mo Ammar is a big believer in PGBC, and more than ready to move further away from the dry Methodist days. As part of that push he’s actively aiding the hunt for locations to center a brewing company downtown.

“We’re dying here,” he says. “Pacific Grove is really thirsty. A brewing company would be so awesome.”

He goes on to say Paul Whitecross, who introduced Monarch Pub at 17th and Lighthouse Avenue last year, is so busy that he can’t handle the volume.

“The demand is very high,” Ammar says. “We have [business] ‘leakage,’ and it’s going mainly to Monterey. [PGBC] means we don’t have to drive out of town to get a beer—we can keep them here, keep our tax dollars here, and with all the laws for drinking and driving, people can walk.”

The enthusiastic and diverse backing of the local community is clearly a plus, and so too is accreditation with the Independent Craft Brewers Association.

“Being a member [of the ICBA] is important to us because we want to differentiate ourselves from larger beer conglomerates,” Justine says. “The independent seal acts as our symbol of innovation and entrepreneurship. Craft beer is becoming such a huge movement and it is important for craft brewers to support one another.”

Chris Noriega is a big supporter. He’s also grocery manager at Grove Market, the definition of a time-honored and family-run institution, so he knows something about local business. Which makes it telling that he thinks PGBC’s strength lies elsewhere.

“It comes down to taste,” he says. “It’s made by a really good brewery. It’s a good beer. People are gonna buy local—Alvarado [Brewing Company] and Peter B’s are local, and sell well—but it’s more than the local angle.”

Until the Topes build out their own equipment, the beer is contracted brewed by two San Jose outposts: Hermitage Brewing Company and Strike Brewing Co.

PGBC plans to open a small-batch production facility in Marina or Sand City in the next 6-10 months, to be followed by a PGBC Taproom, until then Charles Tope addresses the beyond-local approach in another way.

“This golden ale is our first venture into the market, and what we’re planning in the background is a broader-based audience,” he says. “There are some surprises coming. Our mission is to spread the Pacific Grove lifestyle.”

So while quiet little Pagrovia is clearly where this beer saga starts, he continues, “by no means do we expect Pacific Grove to be where this stops.”