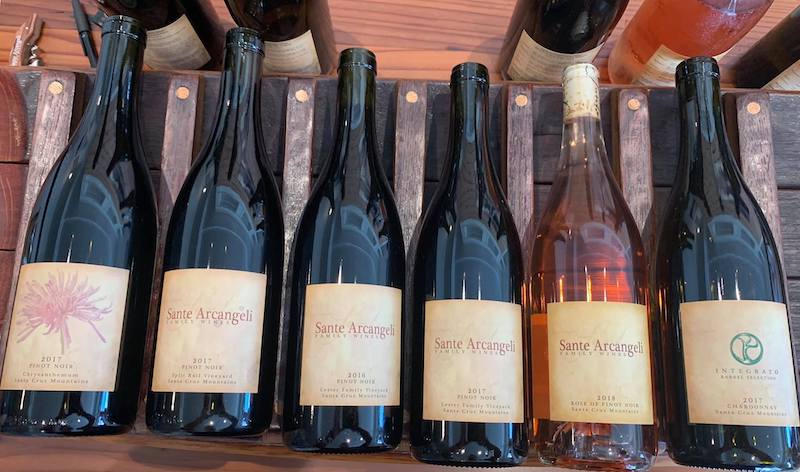 July 16, 2019 – When the going gets tough, the tough get going. Thankfully, John and Melanie Benedetti, beloved owners of Sante Arcangeli Winery, have a lot of tough friends, who pulled together to get the new tasting room in Aptos Village open as of Saturday, July 13. Largely due to efforts of neighboring shop owners and longtime friends, Ellen and Eric Gil, along with a band of volunteers, the grand opening brought in a big crowd, even though it was only announced in a 10pm social media post the night before

That this tasting room is open and running smoothly, is a testament to the huge love and support that the entire community surrounding Sante Arcangeli team has brought to bear in a time of crisis for the Benedetti family.

No one expects a healthy young woman who stays fit as a fiddle, is a long distance runner and who doesn’t smoke, to wind up with Stage 4 lung cancer. Alas, that is what has happened to Melanie Benedetti, age 44, wife of John Benedetti, who is the winemaker/owner of Sante Arcangeli Wines, and mother to Lucca, probably the most posted about six year old on Facebook.

Melanie, who works for the County of Santa Cruz, is a diligent runner and swimmer. Initially complaining of hip pain, which caused her concern, she concurrently developed a nagging cough, which at the time seemed secondary to the discomfort. She was first hospitalized at Kaiser Hospital in San Jose on June 20, 2019, with what was initially diagnosed as a serious case of pneumonia. When a plethora of drugs aimed at eradicating viral, bacterial and fungal infections all proved ineffective, she was sent home to rest and recover. On July 4th, John found her struggling to breathe, and raced her back to Kaiser, where the doctors finally decided to biopsy her lungs.  They also discovered swollen nodes in her abdomen. The diagnosis was not pretty: Stage 4 lung cancer. She’s currently undergoing chemo and everyone is praying for a miracle.

Melanie’s family and friends are utterly devastated and are doing everything they can to help. As a self-employed winemaker, John has no fixed income, and Melanie has been the main source of income for the family. They worry about her losing their medical coverage during this process. So, they’ve kicked off a GoFundme operation with a goal of raising $50,000, which will help the family cover mortgage payments, health insurance, hospital bills and living expenses for the next 6 months.

According to Eric and Ellen Gil, they have known John since he built a website for their Sockshop business in 2004. They have been great friends of Melanie and John ever since. When the Aptos Village project came about, the couple, who also own stores in downtown Santa Cruz, and on Haight St. in San Francisco, purchased one of the buildings, where they recently opened their newest Sockshop & Shoe Company. John was looking for a way to be part of this exciting new development, and the Gils offered to rent the adjoining space so Sante Arcangeli could have a tasting room. So, basically, you can shop for shoes and socks while you’re tasting wine, which is not a bad way to spend an afternoon.

Ellen Gil says they had over 150 visitors show up on Saturday, and since Friday, had added 8 new club members, which is music to the ears of any winemaker. “We put out a sheet for volunteers to sign up, and we have two pages already of people who are willing to donate time to help in the tasting room, at the winery, with caring for Lucca and other support activities,” she says. “Our son, Hunter, also came to pour, and happily donated all his tips to the Melanie fund.”

The wines are outstanding, beginning with the lovely rose of Pinot Noir, a spring day bouquet of floral splendor and vibrant strawberry. On to the Chardonnay, which hits you with lemony freshness, nectarines and a dancing core of acidity. There are two Lester Pinots, the 2017, which is lavish with spice and the 2016 which takes a more savory turn. The absolute bomb is the 2017 Split Rail Pinot, which literally defines Pinot for me, with its floral bouquet, lithe red-fruited core, seamless texture and ethereal weight on the palate. It’s like drinking silk chiffon. The 2017 Chrysanthemum Pinot is deeper, darker and somewhat mysterious, with dried cherries, kirsch and a touch of tannin. Other Sante Arcangeli wines are available for purchase as well.

The owners of Split Rail Vineyard, Carl and Kelsey Taussig, from which his iconic Pinot stems, have also offered help in many ways. Don Dillon— owner of Four Winds Growers and one of the winery’s investors, offered to suspend collection of loan payments from John until next year. “He volunteered that offer and won’t accept no for an answer,” says Benedetti. That’s the kind of investor you want on your side.

Please consider going to GoFundMe and making a contribution to the effort, which collected nearly $40,000 in the first four days. By all means, do come to the tasting room, Thursday through Sunday, at 154 Aptos Village Way, Aptos, from noon to 6pm, where you can enjoy a winetasting flight served at the gorgeous bar made from old redwood found beneath the onsite apple barn when it was moved. Hang out at the beautiful Pacific firewood tables and bar stools, while you’re enjoying a wine flight, with the friendly staff who are eagerly awaiting your visit.

Consider joining the wine club, and take some wine home to share with someone special. And don’t forget to keep Melanie and the entire Benedetti family in your thoughts. Every little bit helps.

The Benedetti’s are planning to hold on Open House Fundraiser at the winery in Aromas on August 24, details to come.