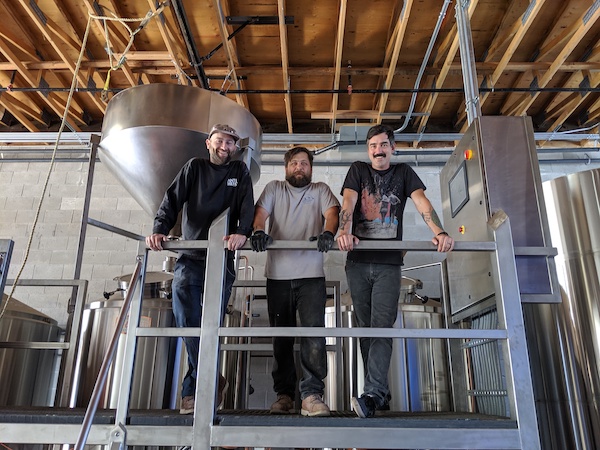 July 30, 2019 – A toast is in order: After a long and thirsty wait, Seaside-based Other Brother Brewing Co. has started circulating its first beers.

OBBC’s Super Custom, a “California common”-style steam beer with a hint of rye, and Junkyard Dry Stout, a toasty and full-flavored dark beer, are flowing at Yeast of Eden and Allegro Gourmet Pizzeria, both in Carmel, plus Beer Thirty and Beer Mule of Santa Cruz and Watsonville, respectively, with more accounts on the way.

This is good news for a Monterey County craft beerscape that has never been stronger.

Still better news awaits, in what could be—fingers crossed—as little as a few weeks: OBBC is getting closer to opening, which is both vital for burgeoning Broadway/Obama Way and eagerly anticipated after delays that have pushed its debut date way past original projections. With the brewery not yet online, the current OBBC creations are the product of an alternating brewing contract with Barrel Brothers in Windsor, California.

The OBBC building itself, with a clean and modern green color scheme, retractable glass garage doors and classy stone columns, adds curb appeal to the former home of Carpet Caravan.

Inside, standing in front of a gleaming 15-barrel, steam-jacketed, custom commercial brew house, three of Other Brother’s partners talked with Edible Monterey Bay about how much they’ve gleaned from a challenging and ever-changing sequence of tasks—which they’ve completed largely on their own, from finishing the epoxy floors to demolition to dry walling.

“We’ve learned how to deal with situations and bond as a team,” says Evan Loewy. “And really see where our strengths lie.”

A clear strength: partner and brewer Kevin Brown’s recipe development. After years at celebrated Alpine Beer Company in San Diego and Alvarado Street Brewery, he understands his creative process well, though articulating it isn’t as easy.

“I guess I try to think of things we like to drink, take those references and make it our own,” Brown says. “I don’t want to bite on anyone’s style, but we pay attention to trends, emulate brewers we admire, and know what we do well.”

Chief among what they do well: hop-driven West Coast beers like those that put Alpine on the map.

“We want to revive the hoppy style that’s been lost in the haze, pun intended,” Nevares says.

Barrel-aged and sour beer programs are also in the works.

One sign things are moving along at 877 Obama Way: The 7,000-square-foot brewery welcomed a pop-up concert earlier this month using booth seating the partners built themselves. The floor plan will also eventually include an event space and a back patio. The 24-foot bar will present 24 taps, with 10 Other Brother brews on draft to start (which will increase). Non-OBBC beverages will include a robust lineup of guest beers, tap wines and Almighty Kombucha.

The working menu involves bar bites, Roman-style pizzas and yeast-focused synergies with Other Brother—imagine beer yeast in sourdoughs and sourdough flavors in the beer suds, beer floats, and breads summoned from spent grains.

“There will be lots of overlap between our two worlds,” Nevares says. “The idea is to do something special and new.”

Other Brother EVOO products will also play into things like like olive oil gelato, a Mendoza specialty. (Other Brother’s first foray into epicurean territory is a family-owned extra virgin olive oil operation.)

Like Mendoza told EMB as the collaboration hatched, “It’s not necessarily going to be just a bakery. What we want to do is base things off of fermentation in a super casual, counter service environment, almost like having a food truck inside their place.”

The soft opening is likely months, rather than weeks, away, as the slick in-house brewing system demands more gas, water and electrical infrastructure than most businesses, which triggered setbacks with Cal Am and PG&E.

The most optimistic opening date comes with the end of summer, though Nevares admits he “wouldn’t bet on it.”

His more conservative open date? “As soon as we’re ready.”

That doesn’t diminish the OBBC team’s eagerness to field feedback from customers. If anything, it amplifies it.

“We’re putting a lot of ourselves and our interests and our passions into this—it’s an opportunity to be vulnerable and see what guests like and don’t like,” Nevares says. “We can’t wait to see how people react.”