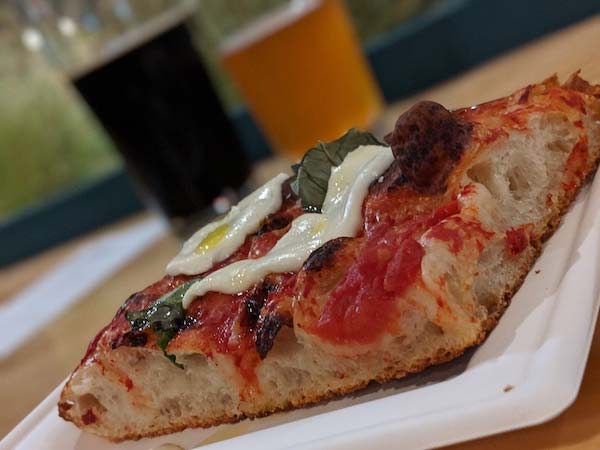 October 22, 2019 – With apologies to Sir Mix-A-Lot, there was a posse on Broadway Saturday night.

No fewer than 250 people—longtime Peninsula locals and many from Seaside—turned up over the course of a three-hour packed-house soft opening at Other Brother Beer Company on Broadway Avenue/Obama Way in Seaside.

A series of delays pushed the opening back months and months, making the thirst for an early peek understandable, but still. This was the biggest social scene I’ve seen in Seaside in decades, easy, worth the wait by itself.

Co-founder and brand manager Evan Loewy, a Carmel Valley native, was among those wowed by the support. “To see the amount of friends, locals, friends and family all there—and to see three years worth of work come together gave us a lot of joy, and some relief, that we’re opening up the space to the public,” he says.

“We were really humbled by the turnout,” operations manager Michael Nevares adds.

The official opening was Tuesday, October 22, at 11am.

Over the weekend, guests were greeted by an open beer-garden-style layout bordered by (clockwise as you enter): a counter flanked by roll-up garage doors looking onto the sidewalk; a collection of picnic tables and a warm yellow wall; a windowed kitchen; and a simple and clean bar with 22 beer taps, three wine taps and one kombucha spout (currently flowing Almighty Kombucha out of Sand City).

Near the entry, a paneled chalkboard hosts 27 slots for beers, wines and a few non-alcoholic options. For the sneak preview, there were four house beers, soon to be made in the adjoining brewery space, where brewer Kevin Brown toured friends and family at various moments. They include the popular and balanced Super Custom Kentucky Common, Bucket Brown Ale, Junkyard Dry Irish Stout and smooth Builder’s Oatmeal Stout ($2 taster, $3 half pour, $6 full).

Coming “soon-ish” will be beers titled AWOL, Nice and Easy and—oh yes—a Seasider Smash Pale Ale, which will be the first beers made and sold commercially in Seaside in a long time, maybe ever.

The list of guest beers numbers eight and draws from the likes of Alvarado Street Brewery (a primary OBB collaborator), Fruition, Cellarmaker, Shanty Shack, Laughing Monk, Temescal and Mission Trail. The curated range among them is admirable, covering pilsner, several IPAs, a pale or two and even a sparkling kiwi wine (prices are $.50 more per pour than the house beers).

This weekend also marked the soft debut of decorated pastry chef Ron Mendoza’s Astra Bread Co. in the aforementioned windowed kitchen. The line at its register stretched more than a dozen deep at times, as eaters flocked for five thick flatbreads, many of which sold out, like the Spudboy with potato, thyme and extra virgin olive oil or the Surfer Rossa with tomato, garlic and oregano.

Interesting detail there: the Other Brother Olive Oil Company that preceded Other Brother Beer Company was introduced to Mendoza when he used its oil at his last stop, Revival Ice Cream in downtown Monterey.

“We were both washed-up skateboarders,” Nevares says. “That was the genesis of the relationship.” From there, consulting led to collaboration, “really organically,” Nevares says.

City Councilman Dave Pacheco—who has lived in Seaside 66 years—was there Saturday trying out the cheese platter and a flatbread.

“That was amazing,” he says. “I can’t think of a time I’ve seen something like that over here. It was a powerful statement about Seaside and the transition it’s been making over the past decade, and where we’re heading.

“It was a whole new generation having fun in a community where they didn’t hang out in the past.”

Hours are 11am-9pm Tuesday-Thursday, until 10pm Friday-Saturday; Sunday hours are to be determined (and will start with 10am-close). More at theotherbrothercompany.com.