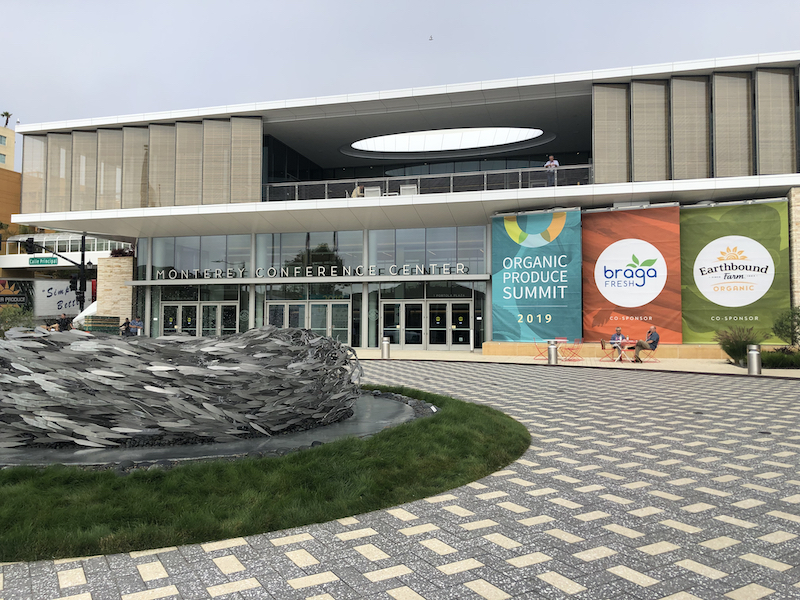 July 16, 2019 – Reflecting the robust growth in sales of organic produce, the 4th annual Organic Produce Summit held in Monterey last week attracted more than 1,600 participants and 148 exhibitors—doubling in size since it launched in 2015.

The event provides a good opportunity for organic produce buyers and sellers to mingle and it offered lots of food for thought from two inspiring keynote speakers: organic activist Robyn O’Brien and renowned chef Dan Barber.

In a riveting and emotional presentation, O’Brien told the story of how she went from being a high-powered corporate financial analyst to an advocate for clean and healthy food.

For her, the a-ha moment came when her daughter had an allergic reaction to standard American breakfast foods. Her analytical skills kicked in at that point and led her to discover that the United States ranks 50th in the world in life expectancy.

She also found that a staggering 41% of Americans are expected to get cancer and that beginning in about 1996 with the introduction of GMO foods, instances of autism, ADHD, food allergies and asthma in children have skyrocketed “despite the fact that we spend more on health care than any other country.”

“We pay doctors to make us healthy, when we really should be paying farmers to keep us healthy,” said O’Brien—who has launched a company called rePlant Capital to help relieve farmer debt and re-finance the food system.

Chef Dan Barber—best-selling author of The Third Plate and co-owner of Blue Hill and Blue Hill at Stone Barns in New York—spoke about the future of organic and the need to develop made-to-measure food systems on a regional basis.

Barber, whose Row 7 Seed company has had some success in breeding vegetables for desirable flavor characteristics, rather than shelf-life or easy of shipping, said that researchers can make all sorts of products tastier—even grains like barley and millet that are usually sold as animal feed.

“The future is going to be based on deliciousness,” predicted Barber, “because consumers are becoming way too educated not to demand it.”

Other speakers from produce companies nationwide tackled hot trends in the industry, such as meal kits, international production and reducing food waste.