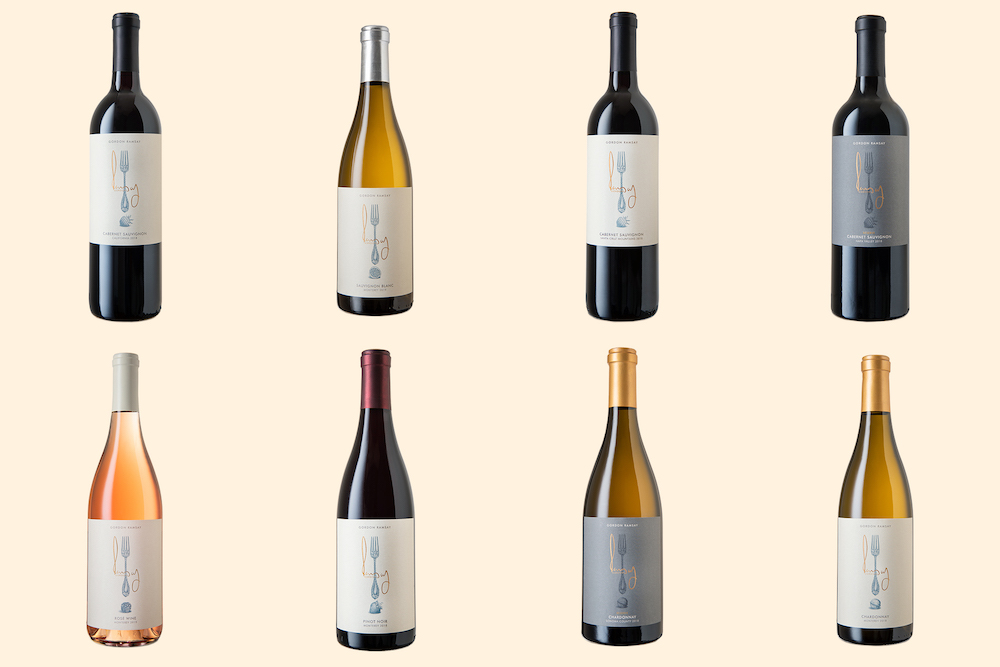 April 6, 2021 – If you’re wondering what the outspoken man behind Hell’s Kitchen would put on a wine label that bears his name, you might be surprised to see the very tasteful and simple representation of his last name, Ramsay, rendered as a knife, in gold, accompanied by a simple, tasteful silver four-tined fork. It looks nothing like the gleamingly menacing pitchfork that adorns his Hell’s Kitchen TV show logo and his restaurant signage. The appellation information is prominent, but the alcohols are not. Very modest and balanced, these are wines meant to enhance the dining experience, not to dominate it. Each label bears the sketch of its prominent fruit. Raspberry, for example.

Local winemaker for Seabold and BOLD, Master Somm Chris Miller, feels very privileged to have been tapped to create the wines for Celebrity Chef Gordon Ramsay, whose entire line of restaurants will eventually carry them.

“Chef wanted to feature a lineup of California wines at his restaurants. Having produced wines from the Monterey area at Seabold Cellars the last few years, I’ve seen the incredible potential of the vineyard sites and quality of fruit grown here. Just as Gordon’s cuisine appeals to a wide audience, we wanted the wines to have that same versatility. Chardonnay, Pinot Noir, and Cabernet Sauvignon are the primary focus. In the cellar, a few barrels really stood out, so we put together a Reserve Chardonnay from Sonoma County and a Reserve Cabernet Sauvignon from Napa for special occasions, or a bit of aging in the cellar.“

Miller collaborated with Ramsay and his staff sommelier, James Boyd, to create the perfect wines to go with the Superstar Chef’s many restaurants across the country.

The purpose of the project is not to make money.  “A couple thousand cases is nothing. Profit isn’t the object. What we’re doing is providing a high quality boutique option. Each wine was created with intent to fit on a specific restaurant menu. There was a plan. And then…Covid.”

The wines had been released into the marketplace for about six months, without any real fanfare. But…Covid. “With the pandemic, and the lack of restaurant business, it made sense to start a wine club and make the wines available on line,” Miller told us. The wines are now available to purchase from the Gordon Ramsay website, and although we didn’t taste all of them, we did sample the ones Miller thinks are the best representatives. Each was a revelation.

The 2018 Gordon Ramsay Chardonnay hails from Monterey, from a Scheid Vineyard called Elm in Arroyo Seco. It’s old Wente clone and absolutely lovely, with a note of clover honey, and plenty of orchard fruit including apricot and apple, layered with tropical goodness that is so Arroyo Seco. It’s about $30.

The 2018 California appellate Cabernet Sauvignon is from the Siletto Vineyard in San Benito, and has classic notes of leather, dark cherry, raspberry jam and baking spice. The finish is really fine, and the tannins like suede. “To be honest,” says Miller, “I didn’t want to have BS wine. My goal was to completely over-deliver.”

He’s really high on the 2018 Cabernet from the Santa Cruz Mountains, which comes from a vineyard near the Lexington Reservoir. This is excellent stuff, with cigar, leather, ripe cherry, blackberry and sage. The fruit here typically hangs until November, so it’s concentrated and big in structure, but still clocks in at a modest 14.2%. Texturally, this is wholesome, mouthpleasing Cabernet that will complement any kind of steak, especially a tomahawk. Miller says Ramsay wants to put a chef’s cleaver on the labels of the Reserve wines he’s working on.

“Our wines are currently in Vegas now, and will then be in the Tahoe property (Hell’s Kitchen at Harvey’s Lake Tahoe in Incline), followed by New Jersey. Ramsay will be opening more restaurants in the near future.”  Post-pandemic bust, restaurants are expected to boom. Miller was recently in Florida and says, “The restaurants are all booked and swamped. They just can’t keep up! Their reservations are all sold out.” We can only hope that we don’t get ahead of ourselves here.

As for his core wines at the Seabold/BOLD tasting room in Carmel Valley, Miller says his aim is to showcase the brilliance of local vineyards in Santa Cruz, Monterey and San Benito. The 2018 Seabold Chardonnay from Olson Vineyard in Prunedale (it says Prunetucky on the label), is absolutely pure clover honey, nectarine, pluot and crunchy pineapple, wound in a creamy texture that exudes lemon cream: seriously brisk, yet meaty. Try the 2019 Grenache Blanc from Mission Ranch if you want something totally surprising. The white pepper, sage, apricot and tropical fruit do cartwheels on a lawn of spun linen. Amazing!

The 2017 Pelio Vineyard Pinot Noir has a nice whiff of pepper and plum on the nose, and never stops throwing flavors at you. Cranberry, tomato leaf, pomegranate, lavender, tarragon, pluot, plum and green tea, and hit of orange peel on the finish. Like a kaleidoscope.

This man knows how to make wine that showcases the pure essence of each vineyard, training tiny spotlights on each little sparkly bit that makes it shine.