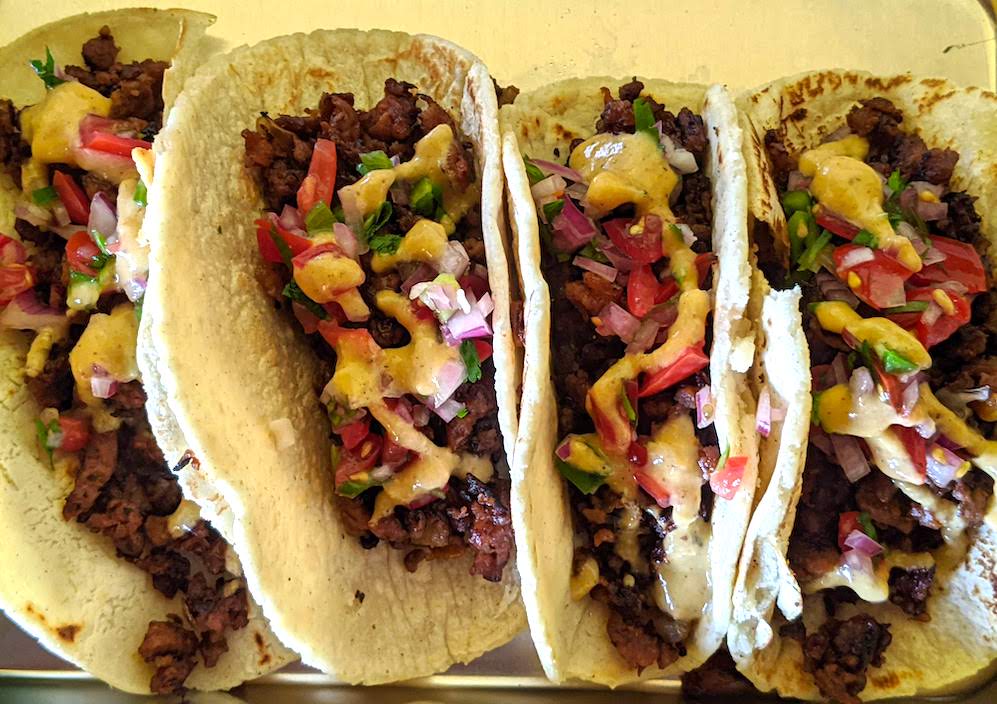 February 18, 2020 – Jesus Montejano has figured out at least one way to get everything he and his friends want from a restaurant, all in one place—things like good tacos on handmade tortillas, American comfort food in sharable formats, craft beer, CBD-infused foods, diverse tequilas and vegetarian-vegan options.

His way to do it: open such a place himself.

“I love sliders! I love tacos! I love craft beer and tequila and mezcal!” he says with a big smile while standing behind the restaurant’s service counter. “We wanted to have them all here.”

As soon as the end of this week (Thursday or Friday, Feb. 20 or 21), his new 5 Mile Buzz House soft-opens in Corralitos, giving the rural community a potential homegrown hit in a historic spot.

The name pays homage to the landmark 5 Mile House that has occupied the Spanish-style building at Freedom Boulevard and Corralitos Road since 1929. Originally a service station, the space adjacent to the 5 Mile Buzz House now houses Blossom’s Farmstore & Coffee Shop, which opened last month.

“We want to keep the historic name alive,” Montejano says. “And serve the modern needs of the community with a spot where a lot of cyclists can hang out after a long ride with a good snack and a margarita.”

Plenty of key pieces are in place, including a simple but well-laid out setting with two patios and a prominent honey bee mural (in the former El Azteca Mexican Restaurant); a sizable parking lot in back that allows for plenty of cars and even festivals or bicycle events; and most importantly chef Lino Gonzales, who has worked in popular spots like Ella’s at the Airport and Zelda’s at the Beach.

“Mostly I’m excited to serve great food to the community of Corralitos,” says Gonzales. “The opportunity the Buzz House gave me to create a delicious menu means a lot.”

When Edible Monterey Bay stopped by pre-opening to take a look around, Gonzales prepped some vegan tacos with umami-rich, cumin-laced seasoning and an intriguing orange salsa on noticeably fresh corn tortillas. (They plan to source tortillas from Watsonville’s La Rosa Tortilla Factory to start and eventually transition to making their own in house.)

Meanwhile 5 Mile is gradually assembling a beer list of 20 with 10 on tap; Montejano cites Humble Sea and Discretion as two local breweries he’s stoked to serve. The ultimate goal for the tequila selection is 50 bottles, though the timeline is unclear on when that will happen. Craft mezcals like Oaxaca-Santa Cruz creation Huxal are also on the way.

EMB tried an electric blue curaçao-style margarita called the Santa Cruz Splash, which proves a little sweet, but benefits from the use of local blueberries.

Legal complications means Montejano’s hopes of CBD-tinged foodstuffs and drinks will have to wait. He’s also excited about cross pollinating his drinks and food with tequila-marinated meats.

5 Mile has set up a bike valet for customers—“Who wants to carry a lock when they don’t have to?” Montejano asks—for the substantial cyclist crowd that loves Corralitos’ roads as much as a bite and a beer post-pedal.

So it’s an exciting time on Freedom Boulevard. But an important reminder bears repeating: This week’s opening is a soft one, so be patient with your needs, forgiving with social media critiques and generous with your feedback. These guys carry an inspiring amount of youthful enthusiasm and with that comes ambition to bite off a lot to chew.

But they’ve got the ingredients—that buzz of enthusiasm chief among them—to pull it off.