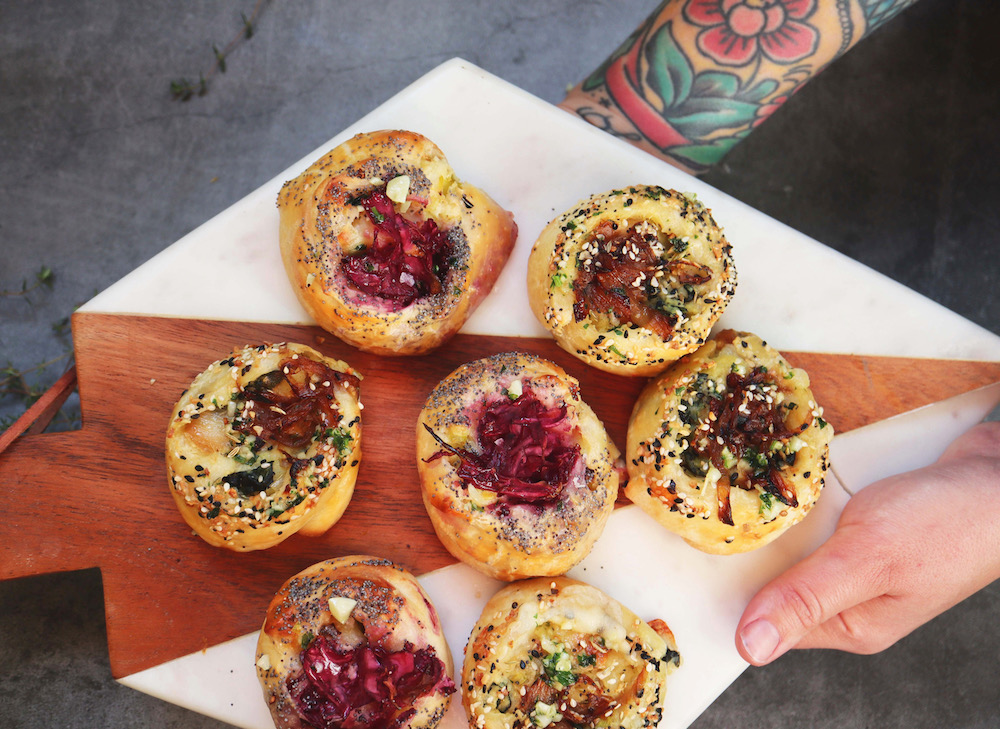 January 26, 2021 – During the pandemic, stay-at-home orders have made many of us pause and slow down the pace of our busy lives. But for chefs like Jessica Yarr, the transition from a bustling kitchen to the relative quiet of home has been especially jarring.

Yarr works for a corporate food service provider and prior to that was executive chef for the now-shuttered Assembly in downtown Santa Cruz.

But since March, Yarr has been working from home, a new work environment that totally changed the structure of her job. “Being a chef, working from home behind a computer is so hard.” While she has appreciated the chance to explore new talents—including a newfound love for teaching—Yarr yearned for an outlet for her culinary creativity.

She teases a few projects that have kept her busy, like virtual cooking classes and even a culinary competition on TV, but the one that’s really stuck is her new popup series, Chicken Foot.

Yarr’s popup plans were actually inspired by a baker selling out of their car in a parking lot.

During the pandemic, many chefs—both trained restaurant chefs and amateur home cooks—have begun selling homemade food directly to customers leveraging a cottage food permit or going underground as a microenterprise home kitchen operation. (The latter is legal in the state, but not yet permitted in Santa Cruz County.) “I love this renegade approach,” says Yarr. “We have to be creative, we have to think outside of the box. People are just trying to survive right now.”

And so Chicken Foot was hatched.

Yarr started with baby steps—a couple bake sales featuring focaccia and granola. While these first forays were homemade, she transitioned to a commercial kitchen to be mindful of local regulations and customers’ concerns for health and safety during the pandemic. (Working in corporate food service, Yarr has extensive training in Covid-safe food prep and handling.) Working out of a commercial kitchen has also allowed her to increase production.

Chicken Foot showcases Eastern European cuisine and culture, reflective of Yarr’s heritage—she’s half Ukranian and her grandparents were Ukranian immigrants and her mother grew up in Manhattan’s Lower East Side. “As a chef, I’m trained to cook all sorts of foods, but as a creative, it’s hard to narrow down what you should do,” says Yarr. “Why not represent myself? Why not celebrate my Eastern European heritage and influence in food? It’s not represented in our area and it’s such a beautiful food.”

The name derives from a desire to “have fun” with food while giving a nod to the nose-to-tail and farm-to-fork movements and staying mindful of food’s roots—not just in sourcing, but culture and tradition.

Yarr finds the popup model especially appealing. She’s able to supplement her income, but more importantly, as a popup she can spotlight more “random stuff” that diners may not be familiar with. “When I was working at Assembly, I put some of those ‘random’ or ‘weird’ things on the menu, but people were like, ‘meh,’” recalls Yarr. “I cooked so many burgers. I want to cook what I have a passion for.” She recognizes those dishes might not appeal to every palate, but will prove special for some.

Chicken Foot’s menu reflects not just family heritage, but Yarr’s experience as a chef and baker.

“Being that I’m both a savory and pastry chef, I really think my signature approach to food is dough based,” she explains. She points to pierogies that straddle both savory and sweet. Yarr’s take on the doughy dumplings features potatoes, leeks and cheese and is served with traditional sides of apple butter and sour cream.

Breads bridge traditional Eastern European cuisine with American. There are knishes—one with potato, kale, caramelized onion and goat cheddar and another with potato, cream cheese and red beet kraut—popular among New York City’s Jewish neighborhoods. Georgian khachapuri cheese bread is one of Chicken Foot’s standouts, inspired by Yarr’s love of Georgia’s natural wines. Tear the ends of the boat-shaped bread off and dunk in the gooey center of goat and sheep cheeses and herbs. “It’s such a show-stopping, gorgeous thing that’s delicious.”

Chicken Foot allows Yarr to showcase her pastry prowess too.

The Russian honey cake is a nod to one of Yarr’s favorite eateries in San Francisco—20th Century Cafe. “That cake is insane and it’s so intricate. It takes a lot of honey.” And Yarr has also cooked up a menu of baked goods like scones, loaves and cookies.

While there’s hope on the horizon with vaccinations underway and shelter-in-place orders relaxing, Yarr understands locals are weary as we approach a year under the pandemic. She hopes Chicken Foot offers some relief with her family-recipe favorites. “Fresh baked bread or bagels or pierogies just feels extra sweet to people right now with all this s**t they’re dealing with.”

Yarr plans weekly popups—for now, by pre-order for pickup—at various spots around town and eventually a booth for local farmers markets. Already, she’s hosted a pastry popup at 11th Hour Coffee and Chicken Foot’s superfood granola is available for purchase at the cafe.

Chicken Foot’s debut dinner popup will be this Sunday with pickup at Apéro Club in Santa Cruz from 3pm to 6pm. Visit chefjessicayarr.com to place an order before Thursday, January 28. Future popups will be announced via Instagram.