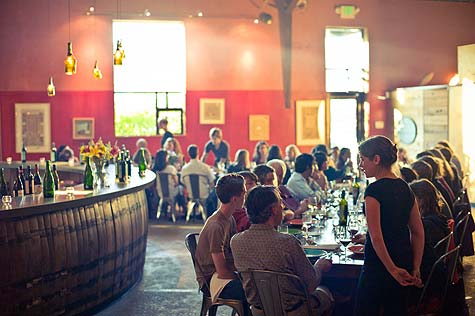 Bonny Doon Vineyard’s acclaimed Cellar Door restaurant welcomed a new chef this month and will soon get a new name.

The chef is 30-year-old Ryan Shelton, of San Jose, and was lured away from the two-Michelin-star restaurant Baumé in Palo Alto. At Baumé, Shelton was pastry chef and later, chef de cuisine, under Bruno Chemel, a chef known for blending modern French and Asian flavors using molecular gastronomy techniques.

Tanks of liquid nitrogen arrived at the Cellar Door in early March, so does that mean molecular gastronomy is finally coming to Santa Cruz? “Over my dead body,” says Randall Grahm, the founder and visionary behind both the winery and the restaurant. “We are NOT going to go molecular.

“We just want to have the most exciting and vibrant food in Santa Cruz. Not to sound too competitive, but we want to be the best restaurant in Santa Cruz,” he says.

Nonetheless, Grahm is not entirely opposed to the molecular trend.

“What is cool about molecular gastronomy is that it brings an element of whimsy to a meal that I would like to see reflected in our menus as well. It would go well with our wines, which have always had an element of fantasy and whimsy,” he says.

The Cellar Door intends to stick to its farm-to-table philosophy and its emphasis on local produce. Grahm is aiming for 80% local purveyors of restaurant ingredients and plans to continue to showcase produce from Bonny Doon Vineyard’s own biodynamic farm in San Juan Bautista.

“Ryan Shelton is someone who is extremely skilled in techniques. It may sound paradoxical, but we are hoping he will be able to use those techniques to bring out the best in local ingredients,” says Grahm, adding that his new chef is a “super-dedicated foodie.”

The restaurant also has a new front-of-the-house manager—Nathaniel Muñoz, a veteran of Soif, who is aiming for a more “refined” level of service in the dining room.

Starting April 1, the restaurant will be re-named Le Cigare Volant in honor of Bonny Doon Vineyard’s signature red wine. Le Cigare Volant, French for the flying cigar or flying saucer, references a silly law enacted by the French wine village of Châteauneuf-du-Pape prohibiting UFO’s from landing in the vineyards. The flying cigar adorns the wine label and is already part of the restaurant decor.

The Cellar Door opened in 2009 with David Kinch of Manresa restaurant in Los Gatos consulting and Kinch protégé Charlie Parker as founding chef.

When Parker left in late 2010, sous-chef Jarod Ottley took the reins. He left in January and is rumored to be looking for a spot to open his own restaurant in Santa Cruz.

Those curious to experience the new Cellar Door can sign up for the Wednesday Night Community Table Dinner. The menu changes weekly. A recent $30 prix fixe dinner featured: grilled asparagus with shaved parmesan and arugula salad; sea trout with almond brown butter and celeriac; and for dessert, blueberry frangipane tart.