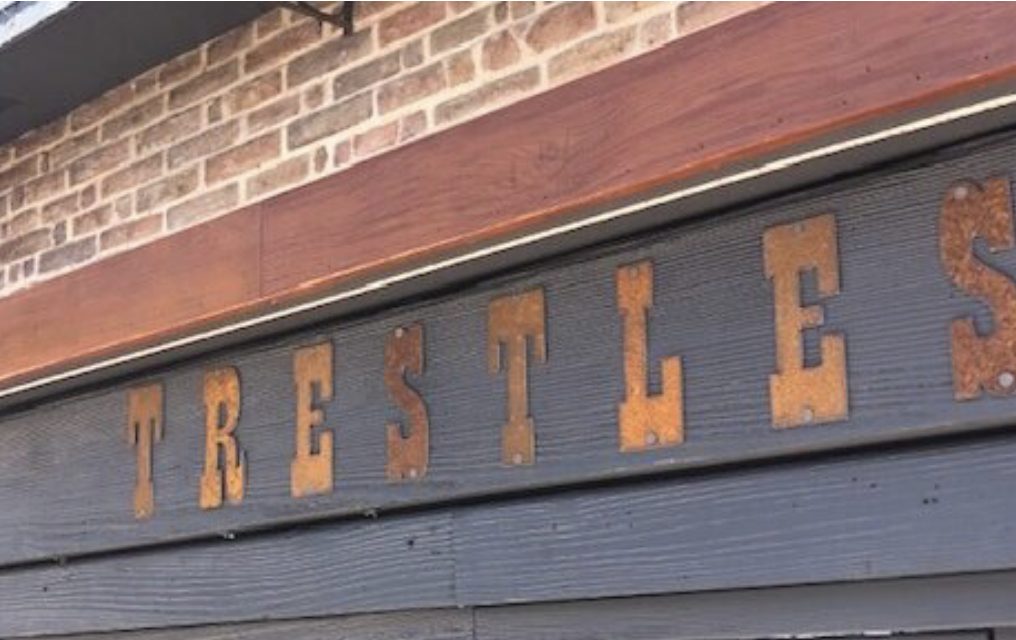 July 20, 2021 – Nick Sherman is getting by with a little help—make that a lot of help—from his friends, and his family, and new partnerships in the creation of his restaurant Trestles in Capitola Village.

This is the first time Sherman, who spent 15 years as a chef for acclaimed Napa Valley eateries, has put together his own restaurant. Trestles debuts this Thursday with a soft opening starting at 5pm. It’s a significant homecoming for Sherman, a Soquel High School graduate who got his start bussing tables at Pasatiempo’s Hollins House and later cooking at Michael’s on Main in Soquel.

Sherman went on to Napa Valley Cooking School and then to intern at Michelin-starred Redd in Yountville. He would go on to work at a number of popular restaurants in Napa Valley, most recently Basalt, where he was executive chef for three and a half years—until the pandemic happened and the farm-to-table-centric restaurant took a long pause last July.

Working at Basalt “was a great experience,” says Sherman, but at the same time, he realized he had a longing to cook and create in a smaller, more intimate atmosphere.

Sherman began spending more time visiting family and friends in the Santa Cruz area, and contemplated what to do next. He discovered that he had really missed being near the Monterey Bay. During his time in Napa Valley, as heady as the experience was, “It was always my dream to come home, fish and be by the ocean,” he says.

Then early this year, he got word that the former Bella Roma restaurant in Capitola was being sold, and that got his attention. He negotiated a lease and set about cleaning and modernizing, with the help of a stalwart crew of friends and family. “Everything lined up,” says Sherman.

Why the name Trestles? The proximity to old train trestles is one reason, but Sherman also notes that building a railroad or any enterprise requires a lot of “hard work, sweat and determination,” and the dedication of many people to the cause. Which also describes just about any restaurant opening, but this one especially.

As luck would have it, his brother is a general contractor, and in the past few months, they’ve updated the space with white subway tile behind the bar, new floors, lighting and other fixtures, and a bar top made from reclaimed redwood that came from a building in Pasatiempo. Sherman’s uncle and parents have also been hands-on in attending to details large and small.

The original pressed tin ceiling remains, but is now painted black, and new black and white murals by local artist Joey Bunnell lend a casually sophisticated ambiance. Even more important, the kitchen has been updated with a new oven, deep fryer and griddle.

Sherman’s vision is to keep the menu hyperlocal and super-seasonal, drawing from the bounty of produce, seafood and meats that are available in the Monterey Bay area. Debut menu items include baby beets salad with yuzu yogurt and pickled cherries, a king salmon entrée, house made ricotta gnocchi with chanterelles and summer truffles, as well as seafood paella. Dishes will be complemented by a curated selection of local wines and craft beers, including a barrel of coveted Pliny the Elder that Sherman snagged from Russian River Brewing for opening weekend.

“We want to have a good, fun approachable menu, comforting but with creativity,” says Sherman. “I’ll use the techniques I’ve learned, use the freshest ingredients and cook with the seasons.”

The restaurant and small bar area will be able to seat about 60, although it will be more limited for the opening, says Trestles general manager Matt Simpson.

The plan is to start with happy hour and dinner service Thursday through Sunday. Sherman and Simpson hope to expand that to seven days a week, and to add lunch or brunch on the weekends.

“We want to fill people up with more than great food and wine,” says Simpson. “We want a restaurant that we would come to.”