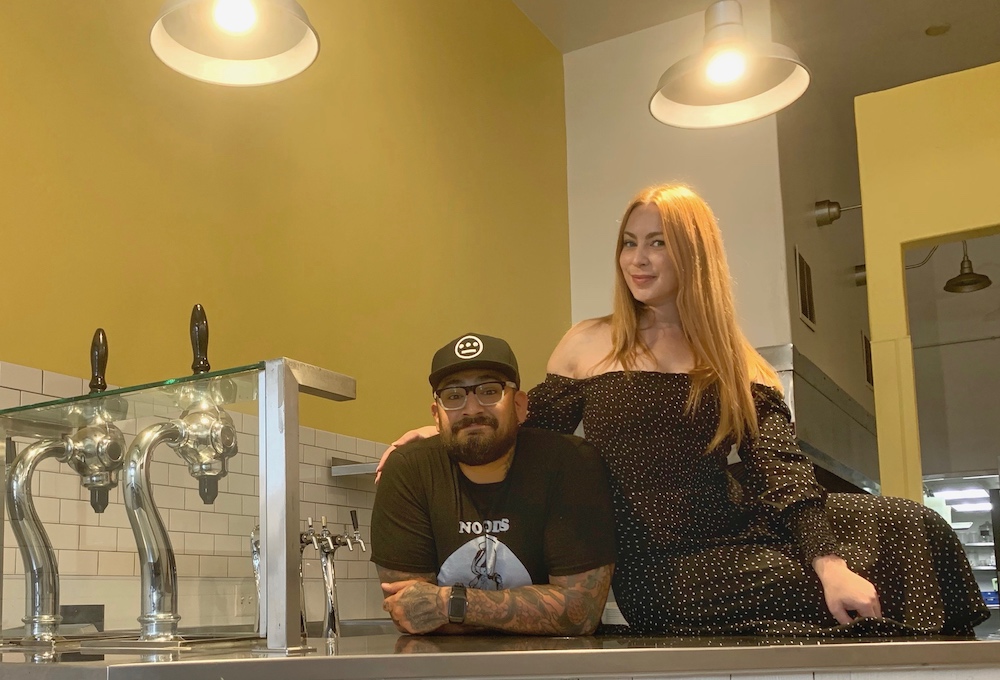 September 22, 2020 – Popular late-night spot Nacho Bizness is on the move. Owners Steb Montez and Brittani Reid-Bristol are relocating their cheesy concept to downtown Monterey. Next month, the new Nacho Bizness will start slinging its signature chips and cheese—and more—in the space vacated by Boardwalk Sub Shop on Alvarado Street.

“We were given an opportunity for a space that provided us with the potential for growth that we simply couldn’t pass up,” explains Reid-Bristol. “Boardwalk put a lot of love and hard work into building a really fantastic kitchen and great dining space. It’s a great location.”

Nacho Bizness debuted in 2016 and quickly grew a rabid following for late-night munchies in its cramped and cozy spot next door to The Bulldog British Pub in New Monterey. Nacho Bizness became a favorite at local music festivals and even had a quick cameo in Big Little Lies.

As the brand grew in popularity, Montez and Reid-Bristol looked for opportunities for expansion. They’d planned for a revamped shop in New Monterey as part of the Bulldog’s ongoing renovations, but facing continued construction delays, they shifted their current focus to a new opportunity in downtown Monterey.

Reid-Bristol notes how her positive relationship with the landlords—the same landlords as her Grace Lifestyle Boutique down the street—sealed the deal. “They’re big fans of Nacho Bizness and have been quietly suggesting for several years that they’d love to see us downtown. We just started having a conversation a couple of months ago and when we realized we weren’t going to be opening anytime soon in New Monterey, how could we pass up this golden cheese opportunity?”

With keys in hand on September 1, Montez and Reid-Bristol quickly got to work freshening up the space, which had sat empty for nearly nine months. “We’re going to make it our own, of course, to imbue a lot more of our quirkiness,” says Reid-Bristol.

Montez emphasizes the new location will have the same funky vibe as the original shop. There’s a new coat of paint and soon the space will be emblazoned with the business’ new logo. Nacho Bizness’ “Chippy” mascot has been retired in favor of a new logo celebrating chips and cheese.

With indoor dining restricted for the foreseeable future, Nacho Bizness will relaunch with an emphasis on takeout. “We’ve already invested in a lot of to-go containers,” says Reid-Bristol. She and Montez have carefully considered how diners can best recreate the nacho experience—crisp chips and gooey cheese—at home.

“That was the problem before—taking it to go and driving 15 minutes, you weren’t going to have the premium experience,” recalls Montez. Now, components will be packaged on their own for easy assembly at home. Look for online ordering and even delivery too. Eventually, the shop may add outdoor dining, but the team admits their hands are full enough with the remodel, much less adding a parklet too.

The expanded digs will fuel an expanded menu. As before, Reid-Bristol will leverage her culinary training to craft housemade cheese sauces and Montez will draw from a library of family recipes—and both will bring a streak of wild creativity.

“There’s a little bit of a danger here with the potential creativity that could happen now that we have so much more space in the kitchen to play with things and we have a fryer,” confesses Reid-Bristol. “Game on!” interrupts Montez. Reid-Bristol has a quick comeback, “For food, well, the limit does not exist, as Lindsay Lohan says,” referencing the famous Mean Girls scene.

“There were items that we didn’t have the space to keep on the menu at the old shop that were very popular,” says Montez. Nacho burritos, cheese-shell tacos and Montez’s family-recipe pork chile verde will now be menu staples.

Montez notes regulars will be especially happy to hear the cult favorite mac and cheese nachos will be a permanent fixture on the menu. “That was one of the things that people were always like, ‘Why isn’t this on the menu all the time?’” he recalls. “It’s going to be a dangerous thing for my wardrobe,” says Reid-Bristol.

The pair drops hints about new menu additions too, like a new hangover burrito that combines a breakfast burrito with cheese dipping sauce and a core of nacho cheese. “You warm it up in the morning, after you bought it for yourself when you were drunk the night before, and cheese will just ooze into everything in there,” she explains. “We’ve already done some test runs and they have been very well received.”

Diners will also have the option of nachos served on waffle fries instead of chips. Tater Tot nachos are increasingly trendy—and they appeared for time to time as a Nacho Bizness weekend special—but Reid-Bristol is officially retiring tots. “We decided tots are old news, they’re played out,” she says. She and Montez worked with their chip supplier—Taco Works in San Luis Obispo—to source the same seasoning blend on their chips for the fries to truly recreate the Nacho Bizness experience on crispy, chiplike potatoes.

Weekend specials will continue at the new location, but now won’t be limited solely to Saturday nights—specials will run Friday through Sunday—and Reid-Bristol says to look out for “brunch-y” specials—think chilaquiles and huevos rancheros—on Sundays too.

The expanded location will also allow Nacho Bizness to open their kitchen for chef collaborations. “We’ll have pop-ups with chef friends who want to feature a creative side they don’t typically tap into in their resident job,” explains Reid-Bristol. “We’ve always wanted to have guest chef nights, but we just couldn’t do it in the old space,” adds Montez.

Reid-Bristol is excited for the new culinary creativity these partnerships could bring, “It’s an opportunity to feature some really great cuisine that this area maybe doesn’t have the following to have a full-time brick-and-mortar restaurant for, but for one night it can.”

That’s in line with the community of support that’s blossomed around Nacho Bizness. Montez points out how grateful he and Reid-Bristol are to all the restaurants, chefs and business owners that have helped Nacho Bizness succeed over the years.

To that end, he hopes eventually the new location can be a social hub for casual celebrations. “When we can have seating inside again and when people are comfortable going out again, we want to be able to host parties. This could be the spot for your softball team to celebrate after a game.”

The pair also tease beer, wine and specialty wine-based cocktails, pending approval of their liquor license application within the next month. They’ve already partnered with Alvarado Street Brewery to brew a signature beer—The Bizness—for the shop and they’ll curate a selection of wines from favorite local wineries.

Look for Nacho Bizness to open in its new location on Alvarado Street in mid-October. For updates in the meantime, follow @nachobiz831 on Instagram.