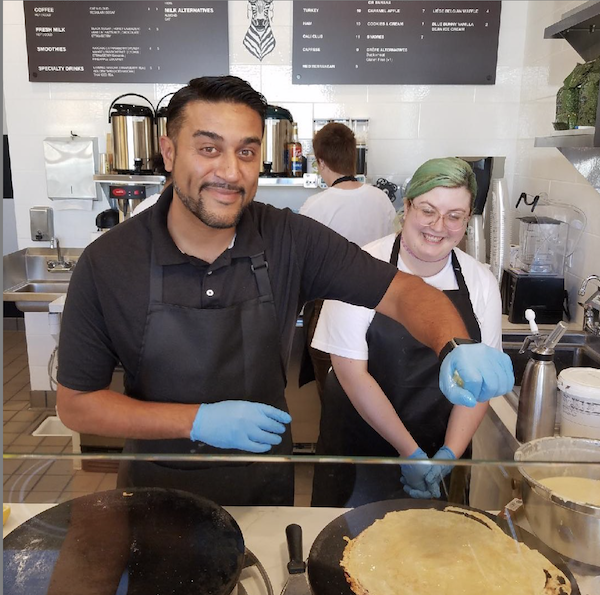 September 24, 2019 – Tasty crepes, refreshing Boba teas and açai bowls are on the menu at the brand new Mr. Z’s Crepes & Teas which has its soft opening this week at The Hangar, across from the airport in Watsonville.

Owned by Ru and Rocky Patel—who also own the Watsonville Baskin Robbins—Mr. Z’s is named for a the adorable zebra featured in the shop’s logo wearing aviator goggles, and a poem by Shel Silverstein. The couple lives in Watsonville with their two children, ages 12 and 15, and say their kids are crazy for Boba tea, which is also known as bubble tea or milk tea.

“We’ve always had to leave the area to go out to eat,” says Ru. “So it’s really exciting that Watsonville is beginning to have more options and places to eat that are fun and relevant.”

Stenciled on the wall is the poem Zebra Question from Shel Silverstein, which begins:

“I asked the zebra
Are you black with white stripes?
Or white with black stripes?
And the zebra asked me,
Are you good with bad habits?
Or are you bad with good habits?”

It is a favorite of the Patels. “The reason that I love that quote so much,” says Ru, “Is that we’re kind of in a funky time right now and it speaks to the need to accept people of all stripes.”

Mr. Z’s is open Tuesday to Sunday from 11am too 8pm. It joins The Beer Mule, which opened in the new complex last spring and the soon-to-open Watsonville outpost of Zameen’s Mediterranean Cuisine.