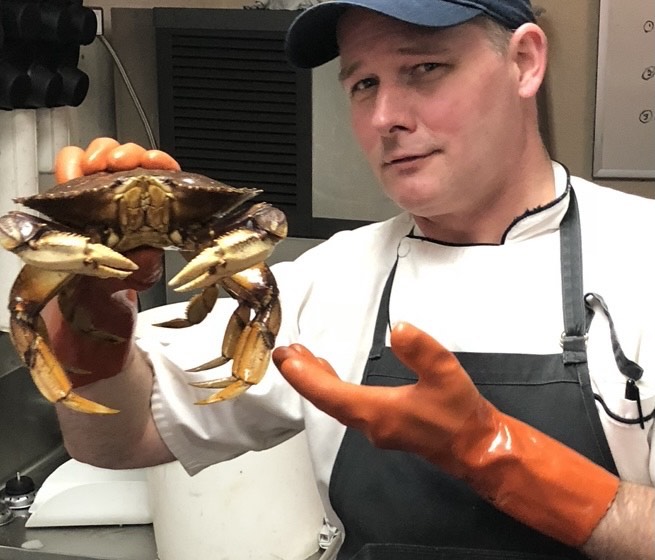 July 20, 2021 – After a six-month renovation, Montrio Bistro in Monterey is getting ready to reopen at the end of August with a talented new executive chef, Adrian Diday, and a slight name change—from now on it will simply be called Montrio.

Chef Adrian has deep experience in fine dining, working for two years in New York City under chef Daniel Boulud at his 3 Michelin-starred restaurant Daniel and for three years under chef Patrick O’Connell at the famed Virginia farm-to-table restaurant The Inn at Little Washington, also the recipient of three Michelin stars.

“We were looking for an extremely talented chef willing to work with us to elevate what we already have,” says Ken Donkersloot, who with his wife Mona owns Montrio, Tarpy’s Roadhouse and Rio Grill as part of their Coastal Roots Hospitality Group. They conducted a nationwide search for the new chef, who arrived in Monterey, for the first time, a week ago.

“I would feel extremely blessed if I could fill the very large shoes of those who came before me,” says Diday, referring to former Montrio Bistro exec chefs Brian Whitmore, Tony Baker and Justin Robarge.

A native of Virginia, Diday studied religion and philosophy at Mary Washington College in Fredericksburg, Va. and was a professional dressage rider before entering the culinary world, where he applies the same rigor and quest for excellence.

Most recently he was executive chef at Mission Point Resort on Michigan’s idyllic, car-free Mackinac Island.

“I want to reopen Montio and have it feel the way it has always been, but making sure to treat the incredible ingredients available here with the respect and fine dining techniques they deserve,” he says.

The chef and owners promise to push for excellence and would welcome a Michelin star, but Diday says: “My goal is to make the food absolutely as perfect as possible, and we’ll see where that takes us.”

The team is in the process of creating a menu for the late-August reopening, but he says, “It’s not going to be all new.”  Customer favorites will remain and “the pressure in on!”

“We have an opportunity to push the bar a little bit for sure,” says Diday. “We will be technique driven, with really big flavors, but the food won’t be unrecognizable.”

As far as the new look of the restaurant, the clouds on the ceiling have come down and walls have been opened up to bring back the heritage feel of the circa 1910 firehouse.

Banquettes have been replaced by booths and the stairway has been opened up to entice more diners upstairs, where the second bar will be put into service and more booths have been added.

“We want it to have a comfortable living room feel, with elevated dining at the same price point,” says Donkersloot.

The owners—who purchased the three restaurants from Downtown Dining just over a year ago—also have plans to expand the special events and catering part of their business.

With chef Adrian Diday now in place, Montrio will become a strong third pillar of their restaurant group.

Montrio opened its doors in 1995. It is a certified green restaurant and winner of a Michelin Plate award in 2019. Montrio earned its reputation by serving sustainable seafood, local organic produce, prime meats, house-made desserts and homemade stocks and sauces, leading to the motto “feel good about what you eat!”