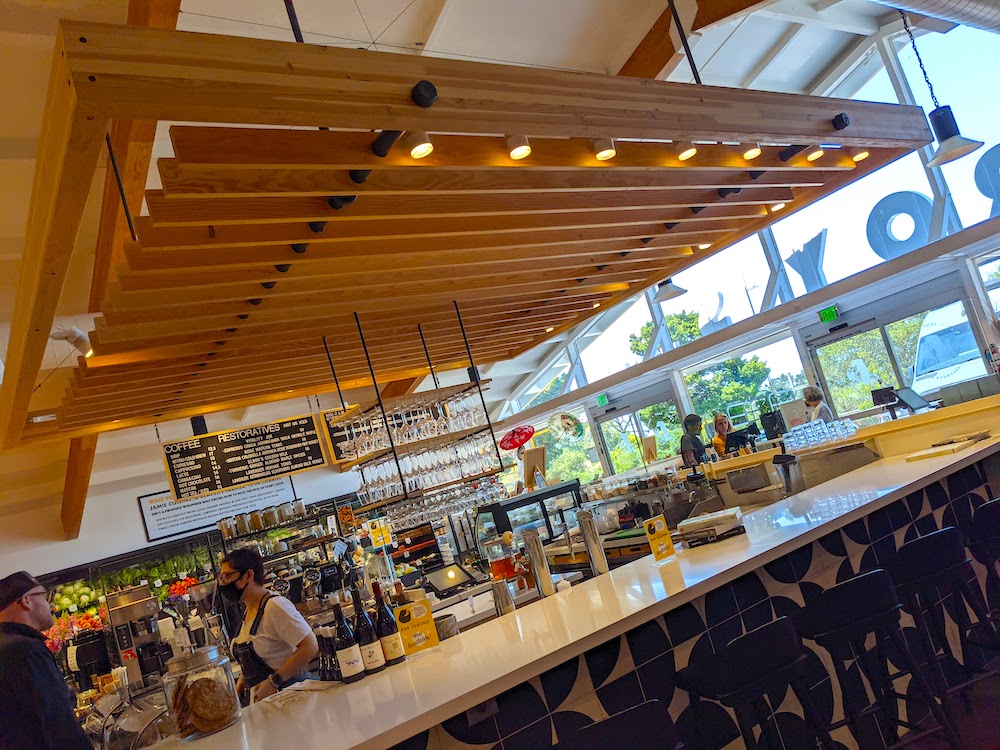 I know that sounds like a lot to swallow.

There are well upwards of 100 wine tasting rooms—likely closer to 200—in the tri-county area. They can be beautiful, historic and pour incredible juice at the same time. Case in point: The converted milk barn in the heart of Carmel Valley Wine Country, where Albatross Ridge now pours its tasty Pinots, turned one on July 4.

But allow me to make the case for The Bar @ Elroy’s, which just opened officially in the center of the fine food grocery that debuted in the former Monte Vista Market last August. (Side note: Plans are in the works for an anniversary party with pop-up food-and-drink demos and a DJ for Aug. 20.)

Here’s my case, in nine points:

• The Bar @ Elroy’s, despite debuting recently, already has the best food of any tasting room south of Soif in Santa Cruz. So it goes when you enjoy a cache of produce, snacks, 300 bulk items, cheeses, charcuterie meats and chef-crafted prepared foods, the latter which are partly visible from a seat at the bar. Prepared by chef Sarah LaCasse, formerly of Earthbound Farm, and baker Eden Colibri Hutchinson—a Carmel Belle alum—the grab-and-go foods are restaurant grade, starring roasted vegetables and meats emerging from the wood-fired Grillworks super machine. Like operations manager Chelsea Davey says, “You have the whole grocery store’s menu at your hands.”

• It features completely natural wines. Along the way, Elroy’s educates newcomers to the category on what natural wines are (organic or biodynamic, made with wild yeasts and minimal manipulation or sulfites) and why to love them (per Elroy’s literature, because they’re delicious, unadulterated and “oozing with personality”).

• Nate Cohen is a dedicated pro whose full-time job is to curate the wine aisle, wine bar and wine club after growing up around the wine industry and his extended family’s Boëte Winery. “I’ve been surrounded by it my whole life,” he says, “whether it was in my aunt and uncle’s winery or working in restaurants.”

• A short but eye-catching list of whites and reds are joined by a Rosé and an incredible orange Albariño wine I tried out of Lodi, California. Glasses range from $12-$18. Cohen describes the inventory at both bar and retail as constantly rotating. “The criteria is all small-lot, no giant operations, all farmed at a scale where it can be done by hand, no nasty pesticides, farmed with the Earth in mind,” he says. “In the cellar, it’s hands-off to let the wines do their thing.”

• Should guests be so inspired, there are plenty of non-vino options, like nitro cold brew or other coffees from Captain + Stoker, a few draft beers, a kombucha and a range of smoothies.

• A Wine Trust membership opens access to three bottles hadpicked by Cohen each month (some allocated only for the club), features first Tuesday tastings ($20 for non-trustees), and includes 10% off wine-related purchases. At $100 a month, wine enthusiasts will find it a sturdy value. A cool detail: The tastings pour the month’s selected bottles aftermembers have had a chance to experience them on their own and then compare notes rather than vice versa. The wines come with detailed pairing, geographic, body, and biographical information—plus renderings of their bottle by in-house designer Troy Harcrow—but no tasting notes. “Nate wants them to discover it for themselves,” Davey says. This month’s triple play ranges from a crazy 25-wine blend from Douro, Portugal to a mellow Gamay Beaujolais from Beaujolais, France to a mineral-driven Chenin Blanc from Saumur, France.

• Elroy’s all-natural wine inventory awaits around the corner if visitors are so inspired to pop a bottle with lunch. Corkage is free for trustees or $10 for non-clubmembers.

So there’s my case. I’d love to hear yours. I know a great place where we can raise a glass and discuss it.