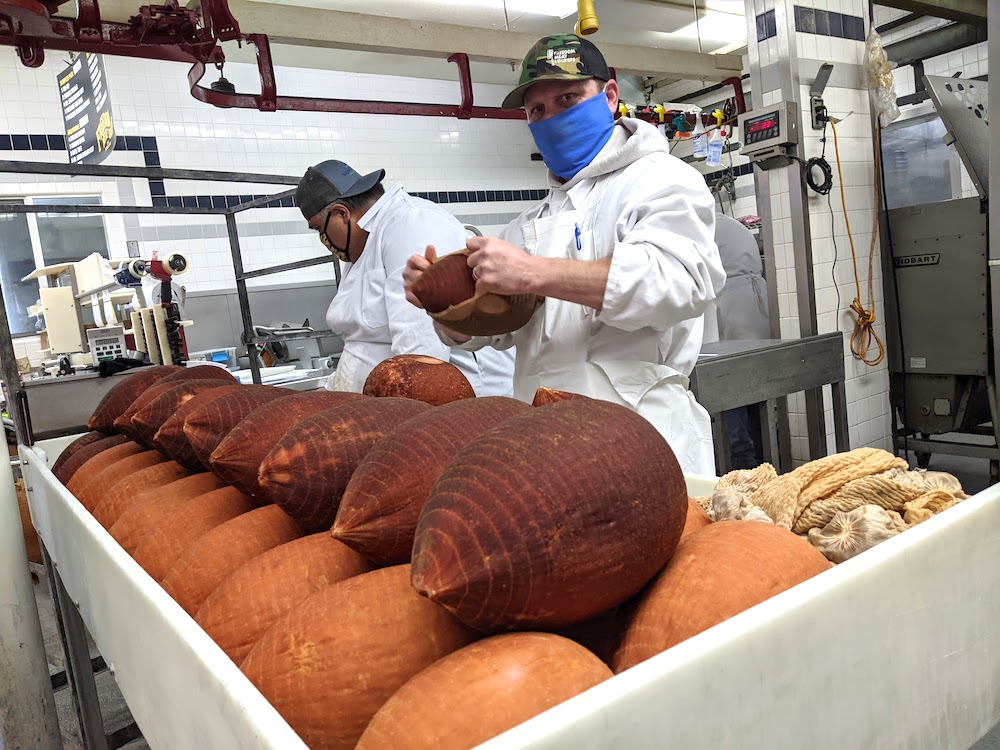 So it went with our summer feature on local barbecue, titled “In Search of Monterey Bay Barbecue.”

(It was accompanied by some clever guidance on grilling from chef-hospitality star Matt Glazer and reflection on shifting diets by Deborah Luhrman in her publisher’s note “Grist for the Mill.”)

Given the overload of intel, here appear a few choice cuts we couldn’t squeeze into the print edition. They highlight some of the most time-honored—and tasty—grill-driven grub the area has to offer, and others that don’t necessarily match the mainstream understanding of what barbecue can be.

I’d love to hear any and all of your local barbecue thoughts via my Twitter or Instagram accounts.

A taste of Freedom is delicious.

Make that tastes of Freedom, plural, because the people at Freedom Meat Locker do more products than can be listed here.

But even that landslide of offerings—which saw a surge in popularity amid shelter-in-place orders, with some households logging orders that ran as high as $3,000—is not what stands out most.

It’s not its staying power, though that’s impressive. Lewis’ grandpa hatched the place in a fraction of the existing space in 1950 after starting in the trade at age 8. The community has grown up around it, as has the family: Lewis lives in the houses surrounding the shop next to her sisters, parents and in-laws. She met her husband on a ski trip the company takes employees on.

It’s not the vigilance that inspired state inspectors to tell staffers it was the cleanest butchery they’ve seen in the state.

And it’s not the unknown number of awards the locker has hanging everywhere, though that’s uncanny. “It’s hard to keep track of them all,” Lewis says.

Rather it’s the chemistry of the team. Touring the place makes it clear those employees are lifers. Playful chants prompt one butcher to speed up his deboning. Setting the mammoth industrial smokers, hanging pork and beef, and huge freezers aside, it feels more like a home kitchen with a huge family of cooks rather than a record-setting meat locker. Thirty years on the team is not uncommon.

That chemistry extends to the loyal customer base. On my visit I saw cops, farmers, white-collar professionals and jumpsuited utility workers stop in for lunch and/or weekend supplies. Many were greeted by name.

“We have die-hard regulars, and a lot of visitors hear about us by word of mouth,” Lewis says. “We have amazing customers, and we’re honored to serve the community.”

A couple of miles down the road, Corralitos Meat Market and Sausage Company enjoys its own family feel. President and part-owner Dave Peterson’s been there since he was 15, back in the 1970s, and makes a point of cultivating that vibe with a staff that includes 14 butchers.

They don’t go through as much meat as Freedom (few do), but they do process hunting harvests to customer specs too, and make a mammoth amount of award-winning sausage, including the gold standard cheesy Bavarian with Wisconsin sharp cheddar cheese, to the tune of 1,000 pounds a week, with spikes for Peterson calls “barbecue holidays.” (They also do 30 other types of sausage, from Croatian-style to buffalo.)

As I wrote in the print feature, the top spots for local barbecue might surprise the uninitiated, namely unincorporated Prunedale and little Aptos / Eastside Santa Cruz. Thanks to the institutions that are Corralitos Market and Freedom Meat Locker, you can make a convincing case the outskirts of Watsonville belong on that list too.

One of the most seasoned grilling minds EMB talked to for the purposes of this piece described barbecue as a classic American food. Fair enough. It’s woven into the identities of multiple regions and millions of lives, both essential and special at the same time.

But to claim fire-roasted meat as our own is like calling oxygen personal property.

Chef’s Table legend Francis Mallman—who I interviewed in 2019 ahead of Pebble Beach Food & Wine—might be the most famous wood fire-friendly chef in the world, and out on his remote Argentinian islands, he’s about as far from U.S.A. barbecue as it gets. His neighbors in Brazil and Chile take their respective churrasco and asada barbecues seriously. Japanese yakitori makes for legendary street food and upscale specialty restaurant fare alike. South Africa swears by its wood-sizzled braai sausages. Filipino lechón, meanwhile, suckling pig stuffed with garlic, fruit and lemongrass (among other things) and slow-cooked on a spit, merits mention, as do Australian and German traditions.

In other words, given more space on the grill, my barbecue odyssey would’ve also veered into the rich non-mainland offerings. My favorites therein: Hawaiian and Korean barbecue.

Various barbecue nerds will talk in paragraphs about the importance of ribs, or beans, or brisket, or sauce—or really any element—in properly assessing an eatery’s abilities. I don’t know if pulled pork is the most meaningful metric, but it’s my favorite, so I almost always order it if it’s on the menu.

And while I tried a number of worthy examples in recent weeks, there’s only one that I daydream about: the Kalua pork at Keoki’s Hawaiian Barbeque in Marina.

Marina is a candidate for best international food city in the region. The Vista Del Camino Circle strip mall presents a microcosm of that, with Keoki’s occupying its far corner and its neighbors doing Thai and Japanese. On my visit Keoki’s was the one among them with a line out the door.

The menu dips into teriyaki beef (made with a “secret” sauce), island-style macaroni salad, pork lau lau specials, and some tasty and salty Spam musubi. But it’s the Kalua pork that, thanks to silky and tender texture, full-bodied flavor and tiny touch of sweet, will bring me back.

Owner-operator George Manabe and his team slow-simmer it in a crock pot for up to eight hours. He won’t tell me his recipe—“We don’t give away our secrets, sir,” he says—but he did reveal he only adds two things. I’m guessing pineapple and coconut in some form, and the Honolulu native gets it just right, capturing an almost caramel character.

Manabe started at various Monterey County farmers markets selling barbecue plates and shave ice in flavors like tiger’s blood and strawberry. While he’s audibly disappointed in the death of quality Hawaiian barbecue options around Monterey Bay, he’s proud of what his team can provide.

“I do it because it’s unique to this area, and is all authentic,” he says. “I like to eat plates like this and pray we can have more places that do it.”

Marina also plays home to one of the more popular Korean barbecue outposts in the region, Nak Won (aka Royal Korean, aka Korean BBQ House), where the signature dishes include rice dumpling soup, jap-chae and, yes, marinated meats cooled on grills inset in the dining tables.

For my galbi and bulgogi, I favor Yi’s Korean BBQ, also tucked in a strip mall in Pacific Grove’s Forest Hill Shopping Center. There Yi’s provides noodle stir fries and rice bowls that earn it rave reviews, but it’s most remarkable for its grilled items.

Only as I discovered in reporting the print feature, the owner retired last March, and the community is short an outstanding barbecue outpost.

Not that I’m all that sad. Yi’s had a good run. And moreover, while completing this story gave me bouts of meat sweats and inspiration to get an overdue checkup, it also gave me anxiety that there was no way I’d get to all the barbecue spots that matter.

Thankfully doc told me I’m healthy as ever (albeit ready to eat more greens). Coincidentally, the Monterey Bay barbecue landscape is as strong as it’s ever been too.