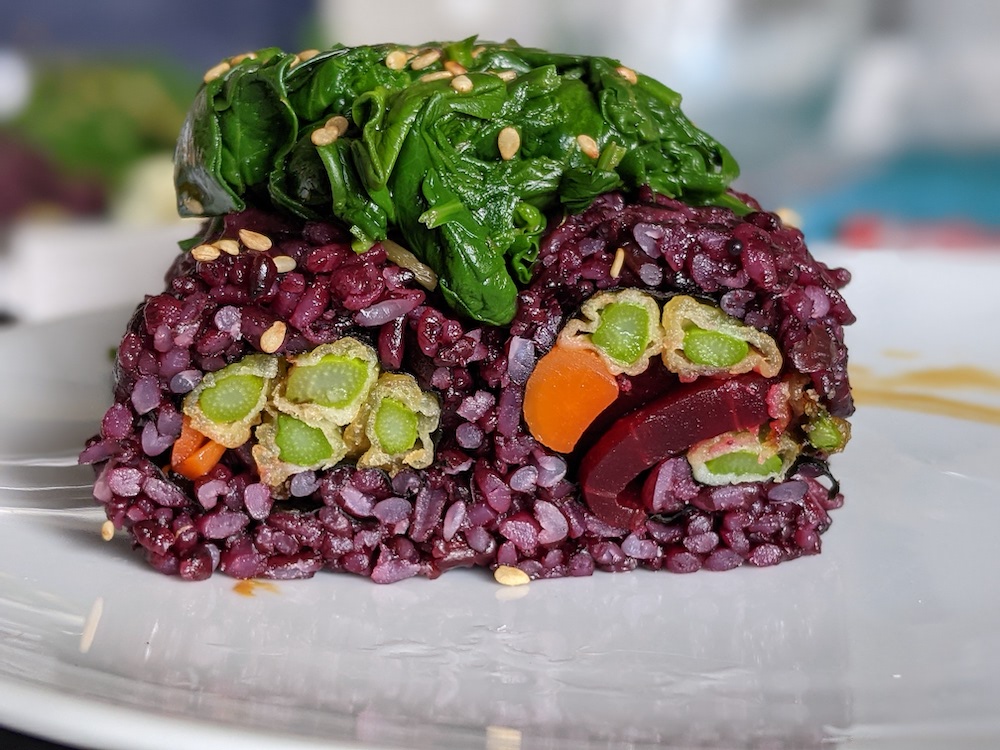 February 2, 2021 – Sometimes things just feel right—maybe it’s a new friend, or a lucky pair of pants, or a town you’re visiting for the first time that just resonates with your soul.

Mika Sushi, which occupies the original Plaza Linda location in Carmel Valley, is one of those things.

It feels right because owner Hank Kim has been around the culinary block, opening four restaurants including Sushi Moto and Soban in Monterey and The Barnyard Shopping Center, respectively, so he knows what he’s doing. He swears this restaurant, his fifth, will be his last, which feels good too.

It feels right because Kim has always been a heart-of-hospitality chef-owner, quick with a complimentary sipper of sake or little nibble of fish for his regulars. And that welcoming energy clicks with the neighborly vibe of the valley.

It feels right because this is a key property in a small village “downtown” that doesn’t have a lot of options—and the internal patio is well-suited not just for outdoor dining amid coronavirus, but for live music, which will return to its nightly installments once it’s safe to do so. Long-time local promoter Kiki Wow directed the entertainment pre-shutdowns, but Kim is unsure who will take the reins from here.

And, if you ask locals, Mika Sushi feels right because it’s so long overdue: Carmel Valley has been waiting for a sushi place to call its own for decades.

So truth be told, if this place was just so-so on the sushi front, it would still be a very welcome addition. The good news is Kim and his wife Young, who helps run the place while the kids home-school in the back and/or play on their tablets, are achieving something much more thoughtful than a run-of-the-mill sushi spot.

The wall sculpture, for instance, is Kim’s own handiwork: He reclaimed wood from a friend’s vintage Salinas water tank and crafted a collage of boards and bolts that are greater than the sum of their parts and speak to his artist’s soul.

He made a stamp to brand the tables with the Mika symbol, and built the shapely wave wall designs by the booths too.

But as cool as those elements are, and as much as they fit with the clean and modern aesthetic of the updated space, the most striking art happens on the plate. Kim has crafted a section of the menu he calls “Deviations,” and when I asked for recommendations, he went right there.

Deviations are pairs of little sculptures, like nigiri, only more precisely and elaborately arranged, mini masterpieces for the eye, imagination and tastebuds.

The two he prioritized knocked my chopsticks off. The Fino #9 approximated a flower woven in colorful salmon atop a fresh slice of scallop and hamachi; the Rising Sun perches delicate quail eggs dusted with tobiko on a foundation of maguro and seaweed. They tasted as balanced and delicious as they looked.

There are other interesting things that differentiate Mika, which means “beautiful fragrance” in Japanese. (Some valley residents advocated for the name Pukudo, which Kim says is “cowboy” in Japanese—though Google Translate begs to differ—but Mika won out.) The selection of vegetarian rolls ranks among the revelations, with uncommon combinations like a roll with tempura asparagus, beets, pickled gobo radish and spinach with black rice. The all-veg Bermuda Triangle maki also looks promising, with shiitaki, cucumber, cilantro, takuan and gobo radish and avocado.

Also noteworthy are the half dozen plus-sized Mika specials. I could eat the J’s Maki I tried every day. (OK, maybe twice). Something about the snow crab, cream cheese and avocado rolled on the inside with salmon baked on top, with an interplay of sauces, just, you know, feels right.

The menu stretches widely from there, with plenty of appetizers, sashimi, nigiri, “hot boxes,” plus udon and ramen noodles Kim featured at his Alvarado Ramen in downtown Monterey.

He also makes a point of sourcing his sakes as attentively as he does his fish, going for quality without breaking the bank. The house hot and cold are noticeably better than what the vast majority of sushi restaurants offer.

So if a toast is in order, with a splash of rice wine in a to-go cup to go with the sushi goodies, that bit of hospitality feels right too.