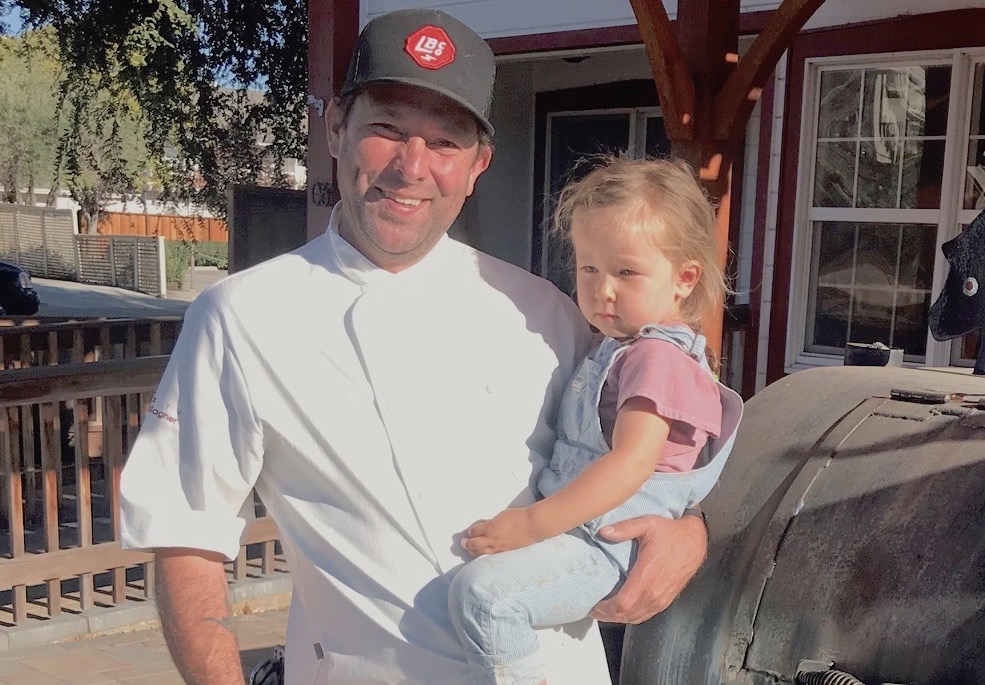 October 13, 2020 – There are two big questions that come to mind about The Smoke Point, a barbecue restaurant poised to open soon in San Juan Bautista.

But Jarad Gallagher, who worked at acclaimed restaurants throughout the Bay Area and the world, says that creating The Smoke Point is a perfect thing to do right now. In fact, “It’s falling into place so quickly, I can barely keep up with it,” says Gallagher, who plans to start Sunday pop ups with takeout meals of smoked prime rib as soon as Oct. 25.

Gallagher, who lives near Hollister, says he’d been looking for restaurant space for the past 10 years and that the right place came available when Basque restaurant Matxain Etxea in San Juan Bautista closed earlier this year. He and business partner Mary Risavi, owner of Wise Goat Organics, put their heads together and decided the time was right too.

“San Juan Bautista is a unique town, but with a limited number of restaurants,” says Gallagher. “There’s a great opportunity to open a steakhouse and barbecue there.” He also points to the fact that the Mission City is a popular waystation and tourist stop for anyone cruising up or down Highway 101. And barbecue is a perfect style of food for outdoor eating and for takeout, perennially popular with just about everyone.

The restaurant at 206 Fourth Street also has a generous amount of outdoor space in a fenced patio area behind the restaurant building, ideal for the COVID era. Gallagher anticipates seating up to 100 people on the patio and eventually would like to build a stage for live music.

He’s planning to roll out the restaurant in stages, first with popups, then with a takeout menu that includes cocktails to go, outdoor service, and then, by next spring, a full-service sit-down establishment.

Ultimately, the menu will include brisket, turkey and other barbecue items in addition to a selection of hamburgers and other sandwiches, salads and desserts. There will also be a “provisions store” inside that will carry Wise Goat’s fermented products such as homemade sauerkraut, kimchi and gut tonics. The Smoke Point applied for, and got, a full liquor license in the last lottery out of 110 applicants, another lucky break.

Gallagher is looking to source his meats locally and is now talking to several purveyors.

Simple food, well prepared, is the kind of cuisine that Gallagher grew up with. A native of Seattle, he started his career at age 5, cooking alongside his chef father. He learned to fish, hunt and forage, and most of all, to love the magic that happened inside kitchens.

He went on to become a sous chef at 19 and an executive chef at 21, training at the Le Cordon Bleu in Paris and London. After working at Michele Bras’ famed restaurant in Laguiole, France, he returned to the U.S. and to a series of jobs at Michelin-starred restaurants like Michael Mina, One Market and Plumed Horse. Most recently he was executive chef at the Michelin-starred Chez TJ’s in Mountain View.

But Gallagher says he longed to return to a simpler style and a not-so-intense restaurant realm. The rat race of Michelin stars, ego-driven kitchens and hideously expensive operating costs in the Bay Area made him reconsider his aspirations, “and then COVID happened, which realigned a lot of things for me,” he says.

Now his priority is serving his community, staying close to his family and having a personal connection with the work he’s doing.

“I want this restaurant to be really fun…a place for family and friends,” he says.

A website is in the works, but for now, Gallagher and Risavi are relying on word of mouth and social media to get the news out as the restaurant scales up. Watch for updates about their upcoming pop ups in the EMB newsletter.