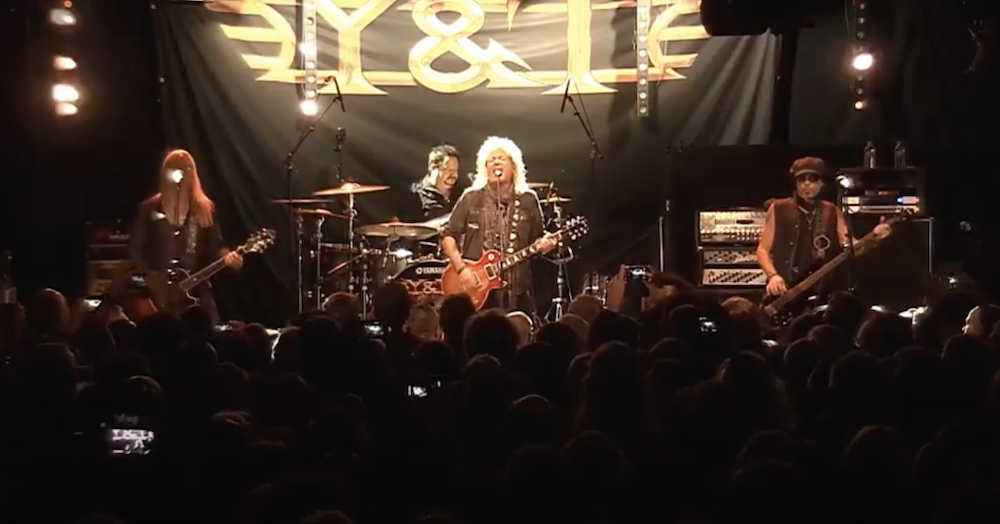 September 10, 2021 – Hard rockers might be more associated with drugs and whiskey than wine. Truth be told, Dave Meniketti, guitarist and vocalist for Y&T, a metal band that began in Oakland in the early 1970s, wasn’t ever all that into the many potent substances that proved the pitfall of so many of his fellow rockers. Dave and his wife Jill, who manages the band, are still touring, still rocking on, and still going strong, long after many of their bandmates have crossed over the great leather lined bridge into rock and roll heaven. In fact they have a concert coming up on Sept 18 at the the Golden State Theater in downtown Monterey.  Y&TSept18Tix

With a discography of 18 albums, four greatest hits collections and a box set, Y&T— which started out as “Yesterday & Today” and then shortened it as if anticipating the profoundly acronymnal era of high tech—have sold over four million albums since their 1974 inception. The band’s most recent single “I’m Coming Home” has climbed to roughly 1.5 million views on YouTube. Hits like Forever, Rescue Me, Mean Streak, Don’t Stop Runnin’ and Summertime Girls, played in heavy rotation on MTV.

The couple, who now believe wine is part and parcel of a healthy lifestyle, admit to being pretty much teetotalers until they discovered what they’d been missing.

“I was the sober, responsible one,” Dave says. “I wasn’t into partying. Most of the wine we had in California just wasn’t impressive. We really got into wine by spending time in Europe on tour.”

“In 2001, we went to Italy on vacation and found ourselves drinking the local wines, eating this great food, says Jill. “We discovered really good wine and it inspired us to explore.”

The couple knew about Napa and Sonoma, but they decided to embark on a broader journey into wine and see where it took them. “I really got involved and wanted to find out how it was made, what varieties and clones I preferred. Suddenly, I was a geek about fine wine!” Dave recalls.

They visited Alexander Valley, Russian River, Santa Maria, Paso Robles and Edna Valley, and soon found themselves members of 15 wine clubs. They loved Chamisal and Kynsi for clean whites and Chardonnays, and gravitated towards Pinot Noir.

Dave clearly remembers being at a Pinot Days event where he had a Tondre Pinot Noir for the first time. “When I tried that wine, I was bowled over! I met Joe and said,  ‘this is this the shit!’  I dragged all my friends to the table, telling them they had to try this wine! The next day, we called Penny and Joe (Alarid) and told them we wanted to buy wine—a lot of wine! We got our first fruit from them in 2014.”

The Meniketti’s were fortunate enough to team up with Rob Jensen at Testarossa in Los Gatos, who helped them scratch the itch and enabled them to make their first two vintages in 2013 and 2014. He even let them invite fans and friends to the winery to taste and purchase the Meniketti wines, but by that point, in 2015, Testarossa needed all the available space for their own production.

Around the same time, Jill and Dave found themselves exploring the Santa Lucia Highlands. On a visit to Soledad, they fell in love with both Hahn and then Wrath. “Every single Chardonnay and Pinot Noir was so good, we asked, ‘Who is the winemaker?!’”

And the rest is history, really, because Sabrine Rodems has made their wine, from vintage 2016 through 2019. Says Jill, “We’re proud of every vintage. Sabrine is so very talented. She and Dave—with his stellar palate—have created such excellent wines for us.” And she’s not just being a groupie. These wines have exactly the same kind of game you expect from everything Rodems makes.

For the Meniketti label, they sourced most of their fruit, including Chardonnay and Pinot Noir, as well as Sauvignon Blanc and Syrah, from the San Saba Vineyard at Wrath. Having spent a lot of time in Europe, the couple loves their dry rosé. They’d never really had one they liked in the US, as many tended to be sweet.  They wanted to do something different, something more powerful, in concert with their heavy metal roots. Says Dave, “I’ve always been a fan of Syrah. We wanted something lighter and lower in alcohol.”  They call it “Temptation.” Do be tempted. It’s quite good—as is their entire lineup.

The Meniketti’s had planned to open a tasting room in Saratoga or Campbell prior to the cataclysm of 2020. But those plans got derailed. During the pandemic, Jill and Dave found themselves doing a bit of soul searching and reflecting on what they wanted to do with their future. Admittedly, they’ve sunk quite a bit of investment into making these wines. Painfully, they came to the decision to not make any more wine—2020 proved a disaster there anyway. Instead, they decided to offer all their wines in inventory at 50% off. So, if you want to collect some really cool celebrity wines, now is your chance.

The couple invites Edible Monterey Bay readers to visit their webstore and take advantage of these wines: MenikettiWine

Enter the code EDIBLE50 before checkout in the Enter Coupon Code field.

2018 Meniketti “Shine On” Sauvignon Blanc, Monterey – From the San Saba Vineyard, this lighter style Sauvignon Blanc exhibits whiffs of lime, mango, grapefruit and straw. New Zealand it is not. It evokes more of a minerally French style, actually. On the palate, kiwi, gooseberry, lime and jalapeno chiles dance along with lemon and white grapefruit, creating a slightly savory and assertive food wine that works nicely with fish tacos and tomatillo salsa, halibut topped with Serrano and avocado crema or crab cakes with lemon-lime aioli.

2019 Meniketti “Temptation” Rosé, Monterey  – Do you think rosé is a thin excuse for a wine? Think again. One look at the magenta grenadine strobe light color on this baby, and you know you’re in for heavy metal impact. Big, bold and filled with strawberry shortcake, and maybe some rhubarb pie, this is one tempting wine to enjoy with everything, or nothing. This is no air guitar wine, that’s for sure. It’s particularly perfect with fresh grilled salmon steaks with rosemary and garlic or a jam-packed paella.

2018 Meniketti “Contagious” Chardonnay, San Saba Vineyard –  The aromas of this wine remind me of the caramel apple stand at the county fair: so beguilingly sweet! Flavorwise, though, it’s more like ripe poached peaches with butter pecan ice cream and butterscotch drizzle. Lipsmacking and satisfying, this wine could well be contagious, with its plentiful acid, rich texture and ripeness of fruit. A wonderful concentration and weight make this something you’ll want to share with your friends, if you’re feeling generous. Or, maybe you just want to hog it for yourself.

2018 Meniketti “Forever” Pinot Noir, Monterey – A little but earthy, a little bit exotic and a whole lot of fun, this one delivers ripe plum, oolong tea, black olive and mustard sauce on the nose, then ups the amp on the flavors with Asian five spice, blackberry, pomegranate, soy and plum sauce. Nicely balanced and versatile. Fantastic with an eggplant and pepper stir-fry or chicken satay with peanut sauce.

2018 Meniketti “Black Tiger” Syrah, Monterey – Now this is cool climate Syrah, oozing raw energy, and surging with savory hillside herbs like wild sage and chaparral. Super spicy, with coriander, cracked white pepper, blueberry and chervil, is just divine and wonderfully mouth filling, without being heavy on the palate. Would be happy to harmonize with everything from Peking duck to roasted beet, feta and arugula salad, or even braised rabbit in fennel. It’s like a guitar solo you never want to end.

2017 Meniketti “Forever” Pinot Noir, Tondre Grapefield, SLH – There’s no getting tired of tasting Tondre Pinot Noir. No matter who makes it, the dark-hearted driving bass guitar notes of this vineyard never quit. Earthy depth, incredible blackberry fruit and baking spice, along with a massive litheness of texture make this a Pinot Noir you’d be likely to want to drink…forever. This is built for encore after encore. It’s like tracks laid down on vinyl: resonant and deep.