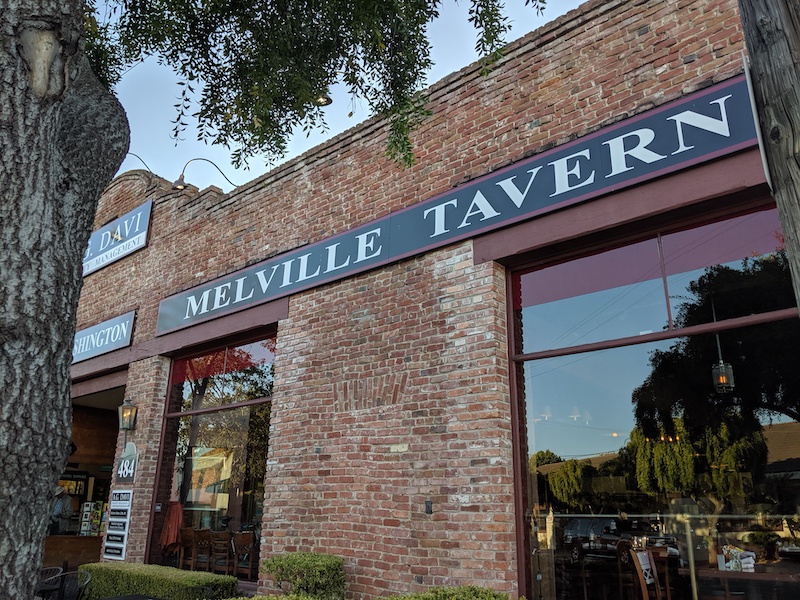 October 8, 2019 – Merriam-Webster doesn’t quite get it. A tavern (\ˈta-vərn\), the dictionary decides, is “an establishment where alcoholic beverages are sold to be drunk on the premises.” Not that this definition is false. It’s just so woefully incomplete.

A tavern, done right, is so much more—it’s a blue-collar refuge, a valhalla of comfort food, a meeting place, a community resource, a refueling station, a neighborhood building block, a brick-and-mortar oasis, a friend in real estate form.

Fortunately the background of Melville Tavern’s new owner-operator Ian Penniman is more food and beverage than dictionary definitions. He’s spent more than three and a half decades in restaurants, including 20 at Baja Cantina in Carmel Valley managing and tending bar, so conjuring an alchemy of satisfaction, familiarity and home-away-from-home is his factory setting.

“I’m all about building a steady clientele,” says Penniman. “I have been the face behind the bar, and it’s important to have that person who meets and greets and remembers people’s names. That face—and that service—is what people are looking for, especially in a place like this. They want it to be like Cheers.”

That’s a big comfort for locals who have come to depend on Melville for its understated offerings and approachable staff. All its key qualities remain in place, with new things to like (lunch! brunch!) coming online and more elements-to-appreciate on the way.

Those existing qualities include a solid wine and beer list with regular bargains on the specials chalkboard going for as little as $5 a glass or pint; rotating craft beers on tap; and a happy hour from 4 to 6pm Monday-Thursday (bottles $4, drafts $5, glasses of wine $6 plus food deals running $6-$8 including tasty shrimp tostadas and zesty fried artichokes).

The qualities also include a well-earned reputation for good food. To that end, the rib-sticking menu isn’t going anywhere. Formidable sandwiches remain a strength, from the superb blackened chicken sandwich to the popular green chili cheeseburger. The pastas—with everything from roasted duck leg fettuccini to shrimp and sausage in a tomato-cream sauce—are in place, as are the main events, like the baby back ribs, house meatloaf, fish and chips, and herb-crusted mahi mahi. Burly salads (like the hanger steak with arugula, cucumber and pickled red onions) and tacos (the pork mole score highly) round out the menu.

Ernesto Ruiz has helped direct the kitchen since the get-go, helping original owner Colin Ling create a range of dishes that are familiar and accessible without sacrificing flair. Ling, who grew up in the restaurant business watching his dad Craig steer Sand Bar and Grill, wasn’t necessarily looking to move on from Melville, but received an offer to launch new restaurants in Idaho that he couldn’t pass up.

“Ernesto refuses to use any pre-packaged sauces because he can make them all himself,” Penniman says. “He is definitely the mastermind behind the food.”

Ruiz, who has spent time at Sandbar and Aubergine, is modest about his cooking.

“I don’t really know how to explain [my process],” he says. “I take the recipes of my mom and grandma and twist them a little bit for the American guys. It’s home-style food.”

The biggest changes will be to extend hours and give downtown Monterey’s workers a new lunch option 11:30am-4pm starting next week.

Entrees will be available, reduced in size and price from dinner, and the popular sandwiches will be available in combos with salads and soups. The various pastas will star in rotating daily specials. Most items will go for $10 to $12.

“We’re in a commercial zone after all,” Penniman says. “We want to give people in the business community something quick, affordable, where they can be in and out but still relax. It’s break time, not stress time.”

Meanwhile Saturday and Sunday brunch 10am-2pm have been a hit since last week’s soft re-opening, with eggs Benedict, bottomless mimosas and Ernesto’s six-spice breakfast potatoes drawing raves. Some of the other items that catch the eye include pulled pork omelets, croque monsieurs, blistered jalapeño fries with crispy ham and poached eggs, chocolate chip pancakes and a blackened salmon Benedict.

The next task for Penniman will be rehabbing the vintage pizza oven and reintroducing what was once the most popular section of the menu.

One final detail bodes well for Melville 2.0: Penniman’s better half Bailee, whom he met at Baja, has her own intuition for restaurants. “She calls it my restaurant, but this is our place,” he says. “She has a good eye. She helps me. It’s like having a bachelor pad, and never knowing that something simple like putting some flowers on the table would help.”