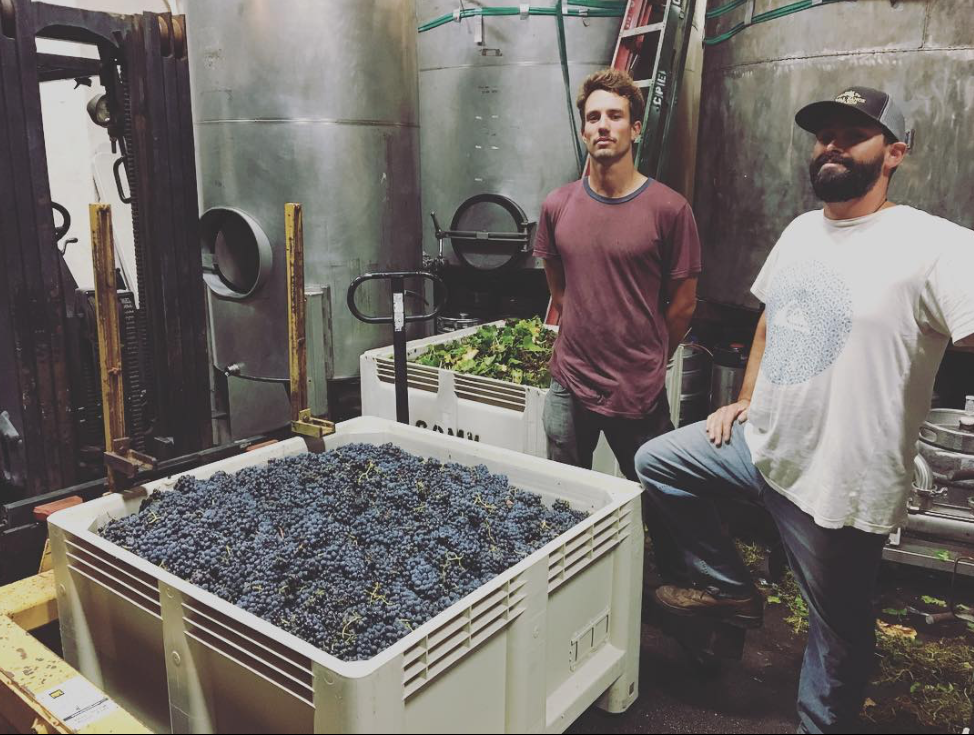 October 1, 2019 – Staring down the nosebleed steep rows of Viognier at Purisima Vineyard (Corralitos) from the relative safety of his 4WD truck, winemaker Cole Thomas, an agroecology major from UCSC, says, “I’ll be honest. I worry about rolling the tractor on these hills sometimes.” It’s a forthright confession from a viticulturist tasked with the near impossibility of tending 100 acres of gnarly wildness, perched in a series of bowls more suited to skiing than grape growing. Thomas and his business partner in Madson Wines, viticulturist Ken Swegles of Rhizos Viticulture, have a thing for uniquely sited vineyards. This one is a poster child.

Purisima is basically a rugged bowl, capped with ankle-turning rocky soil, churned up out of the bowels of the heavily faulted earth that never stops grinding along the Pacific plate. Ringed by redwoods and massively infested with ferns and poison oak, this looks to require a crew of at least 10 to manage, not the meager foursome who are trying to make a go of it. Yet the views, with the ocean blinking in the morning sun, are almost hypnotic. A stand of cypress creates the perfect spot to rest and enjoy the fruits of one’s labors, should you wish to make the climb.

It is in this deceptively idyllic looking piece of paradise, that two men named Dan want to grow a crazy number of unpronounceable grape varieties, along with heritage apples, for the express purpose of making brandy. And maybe some wine on the side. Oh, and it has to be farmed organically (they aim to be CCOF certified) and perhaps biodynamically. Thomas and Swegles are tasked with making it all happen.

To ponder how much effort is going into the making of something that essentially involves steaming the living crap out of the raw material until it becomes an amber liquid strong enough to peel the enamel off your teeth, is enough to make one start day drinking. One wonders how Thomas and Swegles, each roughly half the age of the eldest Dan, rationalize this. Yet, it has long been the privilege of older men to dream the dreams that younger men must then make real.

What it’s like working with these two dreamers: Dan Orange, the landowner with the big ambitions, and Dan Farber, the master distiller? You may know of the latter. Farber owns Osocalis, the brandy distillation house in Soquel. He indeed, has a reputation for making incredible brandies, worth shelling out big bucks to acquire. “They really take the long view,” says Thomas, of the two Dans. “It will take at least ten years to see anything out of this experiment. To invest this much energy in something you might not even get to enjoy in your lifetime is remarkable.”

And yet, his heart is light and his face radiant as he points to areas in this ragged weed and gopher-infested place where vines are actually thriving. Swegles points out that 1 ton of grapes makes 170 gallons of wine, which distills down to about 17 gallons of brandy. “If we get 3 tons an acre, that will yield about 40 gallons of brandy.” It seems unlikely any venture capitalist would invest in such a math-defying experiment. Fortunately, there’s at least a good fruit set on the viognier. There is hope for the future, but this is a story whose contents will long remain a mystery.

Purisima is just one of the many vineyards Thomas and Swegles manage or consult with, some of which they tap as fruit sources for their own Madson Wines brand. We’re on a mission to see four of them, a very small slice of a typical day in the life of a viticulturist, which can entail putting hundreds of miles on one’s preferably 4wd vehicle. The two began making wine together in 2016, with a ton of Chardonnay from a Los Altos vineyard. Madson is named in honor of Thomas’s grandmother: it was her maiden name.

A complete contrast to the wilds of Purisima, Swegles and Thomas also manage Little Ridge Vineyard in Soquel, a sweet sunny patch of Pinot Noir on relatively flat terrain. It comes complete with friendly resident goats and a darling (tiny) winery, where they will begin their production this harvest season. The property is owned by John Schoeneman, who happens to have a private plane. He flew them up to Anderson Valley last year, where they scored some excellent pinot. Up until now, they’ve been producing their wines at Jeff Emery’s Santa Cruz Mountain Vineyard facility in Santa Cruz, where both worked as assistant winemakers in the past. This harvest, they’ve begun crushing at Little Ridge, and are delighted to have their own space. Madson Wines intends to open for tasting at some point here at Little Ridge as well, but that’s another story for another day. More vines await.

A short trek up San Jose Soquel Road leads to the magnificent Casa Toyon Vineyard, with gorgeous quad-trained Chardonnay vines, along with several clones of Pinot Noir. The bucolic vineyard is grazed by resident sheep in the spring. Thomas and Swegles will soon bottle a Toyon Vineyard Pinot Noir, and will also have a reserve bottling of Pommard called “Pied De Cuvee,” which they fermented right in the vineyard last year, after trodding with their feet. Talk about hands on.

The next vinestop on this grape adventure involves a long and winding pilgrimage up Black Road to Skyline to the vineyard for which Ken Swegles clearly has the most overt affection: Ascona. The site of an old Christmas tree farm, at 2200 ft. elevation, manicured rows of Syrah, Sangiovese, Pinot Noir and more march right up to magnificent conifers that managed to escape the saws and hatchets of holiday shoppers. Walking through the vines here, enjoying the fresh pine-scented air, you can feel the intensity of the sun, and yet that breeze reminds you from whence it came. Swegles mentions that it snowed enough up here last winter he could have skied down the newly planted steeps. As we walk reluctantly back to the truck to begin our return to the coast, it’s obvious the two cherish every moment outdoors, among the vines, with the cloud-speckled sky their office ceiling. While it’s a very physical job, the rewards feed the soul.

For this harvest, Thomas and Swegles are on track to make Chardonnay from Bruzzone Vineyard in Scotts Valley, Syrah from Eagle’s Nest in the Saratoga hills, Syrah from Littlehale Vineyard in the Summit area, syrah from KT Vineyard in Cachaugua and chardonnay from Arey Vineyard, a 30-year-old site off of Page Mill Rd. in Los Altos hills on marine sandstone soils. They are bringing in Syrah from Prosperity Vineyard in Arroyo Seco, and are making Sangiovese, Semillon, Cabernet Sauvignon and sparkling Zinfandel rosé, from Komrosky Vineyard. Additionally, they are also making a whole cluster, carbonic maceration style red wine from Mourvedre sourced from Contra Costa. In the past, they have also made Chardonnay and Cabernet from PM Staiger in Boulder Creek.

Thomas and Swegles seem to have a habit of finding those far out, eclectic vineyards with a unique story to tell. Perhaps their label is like a coffeehouse, or a speakeasy, where the vineyards get to spin their own yarns, in their own voices.

Interested in tasting their wines? Make an appointment by emailing madsonwines@gmail.com. You can purchase wines by signing up for their wine club, which gets first priority upon release, and you can also procure the wines at K&L Wine Merchants, Soif, Ruthe Roberts Wine Collective and Staff of Life.

This is definitely a venture to watch.