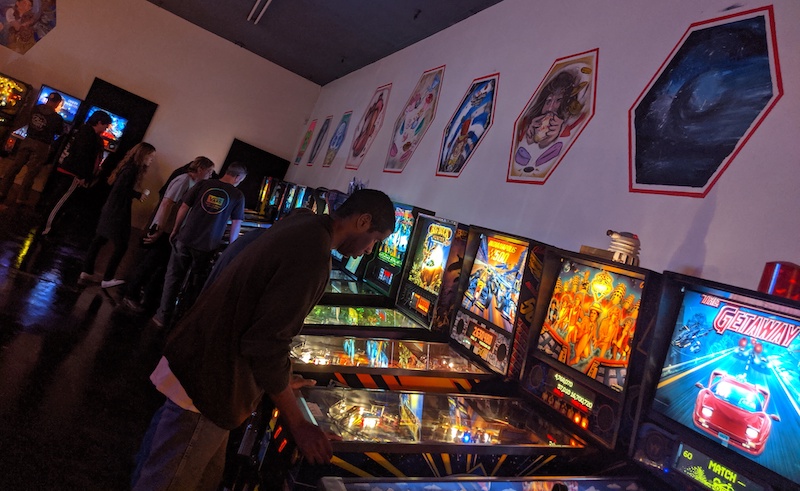 December 3, 2019 – Peanut butter and jelly. Sun and sand. Wine and cheese. Guitar and drums. Lime and salt. Steph and Klay.

These are pairings worth celebrating on a regular basis, though we’ll have to wait on the Splash Brothers. In the meantime, there is a new candidate for this lofty category of couplings: pinball and craft beer in a can.

So goes the fundamental formula for upstart and semi-underground “pinhead” paradise Lynn’s Arcade: A Pinball Parlor and Can Slangery, tucked in a nook at the heart of University Plaza in Seaside.

It’s a wonderland of glowing machines and small-batch beverages. The rosters of each, which rotate constantly, could comprise all you really need to know about this place*.

If one quality is reflected in both collections, it’s the archeological level of curation. Every choice, from The Walking Dead machine that was re-themed from a Baracora machine to the Nightmare Brewing Company Colombian Necktie sour beer—with can art as savage as the gose-style beer is tasty—feels like a revelation. The Lynn’s team, which chronically “hunts” collectible machines on Craigslist, isn’t afraid to drive to the Bay Area for a craft beer drop from Auburn-based Moonraker, or fly to Denver for a machine the seller refused to ship because the cargo was too precious (the rare and highly-sought-after Big Lebowski game, which cost a cool $13,000 and now is valued at upwards of $20 grand).

“Our philosophy is: offer really good beer and really good pinball,”  says co-owner Matthew Talley, “and let them shine for themselves.”

Locals-in-the-know may recognize Talley from his managerial posts at least two cult hits, the defunct Ol’ Factory Cafe in Sand City and Carmel Belle in Carmel-by-the-Sea. They may or may not recognize him as number 108 pinball player in California, and number 1,345 in the world by virtue of his International Flipper Association Point totals. (Those ranking have hopefully risen since the drafting of this piece.)

“We’re keeping it the same vibe as those places,” he says. “A chill vibe, a place to relax, that’s what we’re going for. It’s not super fancy, we did all the work on the floor, and paint, and bathroom ourselves. It’s just a mellow and clean environment.”

*Back to the asterisk: There’s more to this place than multi-ball dreams and hipster-grade cerveza. Namely, there’s a whole living, breathing and booming pinball subculture, complete with its own vernacular and the global scoring system.

“Terminology,” is one thing Talley says tells him he has a true “pinhead” on his hands; Edible Monterey Bay has verified “Keep flipping,” is a valid phrase among them.

Lynn’s started long before its location opened this fall, with Talley and co-owner Cary Carmichael, Carmichael’s wife Nikki (who’s also a Lynn’s principal) and Steve Hawthorne meeting at Angelina’s Pizzeria in Corral de Tierra to face off on their four, and later six, machines. They migrated to a warehouse owned by Carmichael’s dad in Salinas, where his dad kept a half dozen personal machines, and Carbone’s in New Monterey, and back to the warehouse. League members kept joining and moving in their own machines. Lynn’s, a namesake nod to both Carmichael’s dad Lynn and Flynn’s Arcade from Tron, currently keeps around 25 pinball games, a chunk of them contributed by league members.

“We started growing and pinheads started coming out of the woodwork,” Talley says. “It’s blowing up, man. It’s mainly just hanging out with friends and playing for the fun of it.”

On occasion Lynn’s cross-pollinates with other sports and Carmel Craft Brewing Company. Last month they did a “Pin Golf” tournament on CCBC’s machines and a couple that were trucked over, spliced with a small circuit of disc golf.

“The ball could be bouncing good for you, or bad for you,” Talley says. “It’s like any sport. It all depends on the day. That’s why we do a 10-week league season.”

Lynn’s hours are 5pm to midnight weekdays, noon-midnight Saturday and 10am-10pm Sunday. Entry is a flat $15 per day for unlimited free play and in-and-out privileges.

“Playing and improving at pinball is definitely about repetition, learning where the funny bounces are, where the kinks are,” Talley says. “Part of why we [do a flat rate] is the fun of playing over and over. That way you can practice and learn and grow as a player without dumping quarters in a game.”

Speaking of food, BYO eats are enthusiastically encouraged, and made that much easier by the proximity of family-owned University Plaza neighbors The Butter House, Papa Chevo’s, Baan Thai, Harumi Sushi and The Orient.

Talley says the response has been the biggest eye-opener, particularly since any promotion has been strictly word-of-mouth.

“The turnout has been the biggest surprise,” he says. “People have come from as far away as the Bay Area. They just find us. And the pinball people have been rad. Nobody’s been crazy. Everybody’s chill.”

Cary Carmichael seems most stoked about the organic evolution of a home-grown group. “Just being able to be able to continue to grow with an actual location is the best part,” he says. “Before it was a pinball speakeasy. Now we are an actual place people can find and visit. It’s a lot different than before.”

For her part, Nikki Carmichael sounds most pleased with the joy people discover—or rediscover—amid the lights, game soundtracks and intriguing wall art. “I think people forget how fun it is because it’s been a while since they stepped up to one of those old-school games,” Nikki says. “It’s nostalgic but it’s new and surprising at the same time.”