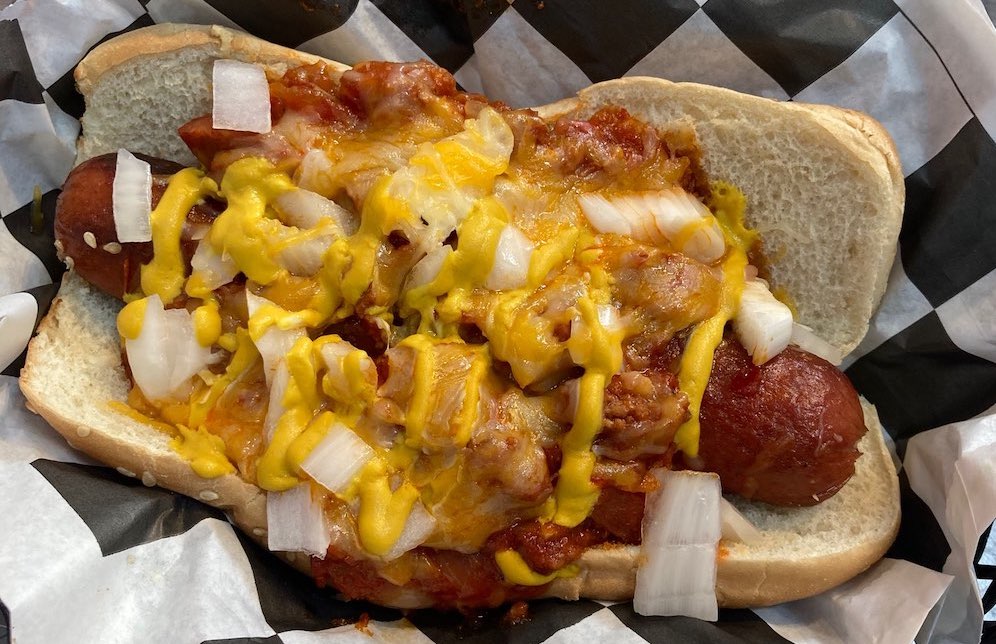 July 14, 2020 – There is a lot going on with the Spanish Bay, a bacon-wrapped hot dog with garlic, nacho cheese, tomatoes and grilled jalapeños. Same for the Peeks dog—we’re talking pulled pork, kimchee, pimento cream cheese, tangy slaw and special sauce.

But that’s only appropriate at Lucy’s on Lighthouse, because Lucy’s itself has a lot going on at its location in the former An Choi Restaurant, at 1120 Lighthouse Ave., near the Pacific Grove Municipal Golf course. Here’s a rundown of the key ingredients as opening day arrives Saturday (hours are 7am-7pm):

Like the Spanish Bay and Peeks, each of the 18 hot dogs at Lucy’s is named for an area surf spot, like the Cliff House, Bone Yards and The Ghost Tree (with chili, nacho cheese and tater tots). The dogs are all-beef kosher Nathan’s dogs, with veggie, turkey or Polish sausage options and the chance to go lettuce wrap. One dog, the Otters, is a Flamin’ Hot Cheeto-encrusted dog wrapped in pastry. They run $6-$13.50.

Legend for both its creativity and crave-ability, Marianne’s Ice Cream is partnering with Lucy’s on the sweeter side of the menu. Fourteen flavors run from inventions like Butter Brickle and Blueberry Cheesecake to Mudpie and Pistachio. Marianne’s special confections include chocolate-dipped strawberry ice cream sandwiches and peanut butter-chocolate-salt bars.

Ice cream is also the medium for further possibilities. In addition to cones, there are also milkshakes, sundaes, floats and banana splits.

Curated beers, wines and espressos complete the offerings. The bottle and can selection includes brews like Alvarado Street Brewery’s Mai Tai PA, Deschutes Fresh Squeezed IPA, Alagash White and White Claw. Fun flows with “adult” root beer and orange floats and a pomegranate sorbet mimosa. Everything, including wine splits and Sofia in a can, is designed to be easy to take somewhere to admire the waves.

It is a strong statement to make, and there it is at lucyspg.com. It is also required context to understand Tamie Aceves’ food resume: She has built a modest dynasty around rustic and indulgent foods with her catering business La Crème Monterey and cult-hit restaurant Crema. At Crema, the downhome fried chicken and waffles, biscuits and gravy, and crab cake Benedicts are equal to the best out there. When Aceves says hot dogs and ice cream are her jam—and that this is a passion project in a very pure sense—that bodes well for fans of big flavor. Eating should be fun, and with her projects it pretty much always is.

One of the primary goals of Lucy’s is to celebrate “the spirit and culture of NorCal surf and skate.” They do that with the aforementioned names for the dogs and tots. They do that with a cacophony of urban art and graffiti. They do it with a yard gate made of skate decks. They do it with kinetic wave and half-pipe imagery on the website. Co-owner Joleen Green does it personally. She’s been collecting the boards and stickers that adorn the place for 25 years. And she’s out there throwing elbows and taking names on the Roller Derby circuit, where she goes by the name Darby Thrash (a play off punk rock star Darby Crash) while skating for the Faultline Derby Devilz.

“The basis for my family’s whole life is skate, surf and Roller Derby,” she says. “So it made sense to find inspiration there.”