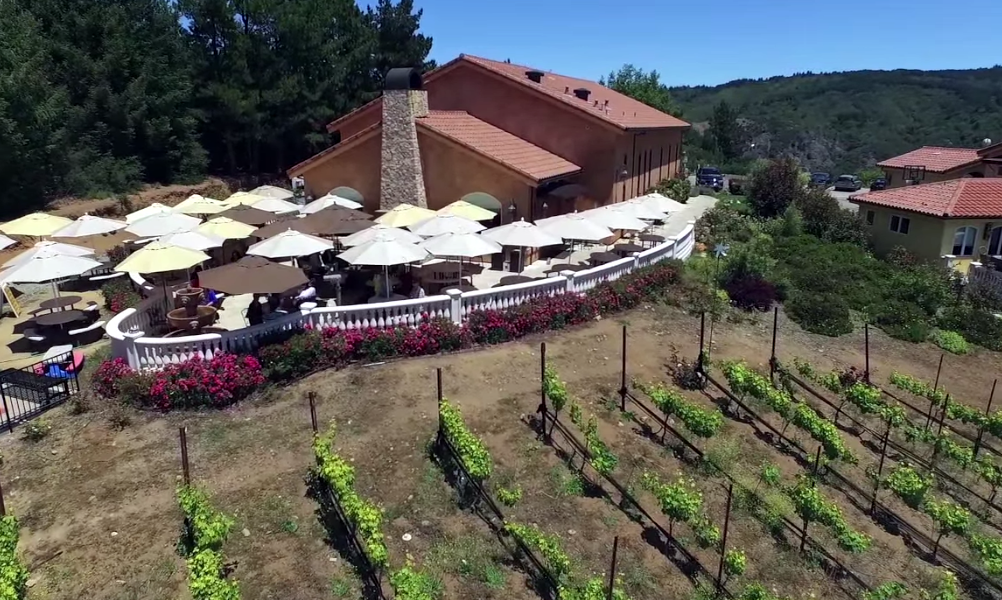 December 8, 2020 – The nation’s largest producer of Pinotage and the most spectacular winery in the Santa Cruz Mountains has a new owner. Founded by the late Paul Kemp, a personal injury lawyer, and his wife Amy Wiler Kemp, herself an attorney, the Tuscan-style winery dramatically set against the looming backdrop of Loma Prieta peak is now in the care of Chris Arriaga, a real estate entrepreneur and former US Marshall. He and his daughter, Samantha, both residents of Saratoga, will continue to operate the winery under its existing name, retaining all staff, along with longtime consulting winemaker Michael Sones (formerly of Bargetto, and proprietor with his wife, Lois, of Sones Cellars in Santa Cruz).

Arriaga, who grew up in San Jose and went to college at Cabrillo and UC Santa Cruz, said, “I’ve had an interest in owning a winery for some time. This one was all set and ready to go, so I’m not reinventing the wheel.” He’s also in the process of turning what used to be Flanagan’s at the Crossroads Shopping Center in Carmel into O’Callaghans. More on that another time.

When the Kemp’s purchased the mountaintop property with sweeping views of the Monterey Bay in 2000, they initially planted Chardonnay, Merlot and Cabernet Sauvignon. These turned out not to be the best fit for a high altitude site facing the cool Pacific Ocean. But Paul loved Chardonnay and Amy loves Merlot and Cab, so that’s what they planted, in the fashion of pretty much every vineyard owner determined to learn the hard way.

Nothing about this project was easy.

Yet, under the expert direction of Amy, a mother of two and former GM of retail stores based in San Francisco, the 6 bedroom 5 bath home, along with matching winery and tasting room, took shape. Her impeccable taste and fortitude enabled her to navigate the myriad challenges of mountain construction, in an area where roads are dicey and GPS was literally a joke. It still is.

Amy told us, “Never in my wildest dreams did I think I’d build a winery, home and tasting room on top of a remote hilltop at 2,600 ft in the Santa Cruz Mountains. But my late husband, Paul, fantasized about mountain living, complete with a vineyard and a winery. Fortunately, I had the design, building and business experience to turn that fantasy into a reality.”

Many were the mishaps, including a delivery driver who wouldn’t listen to directions: imagine that!  A man who won’t take directions from a woman! An entire semi-load of sheet rock flipped over the side of the hill. Power outages, spotty cell service and the occasional snowstorm are mountain realities. Add to that the logistics of getting grape haulers and mobile bottling lines up to the summit.

But she persevered, becoming, in her words, “a true mountain woman, complete with 4-wheel drive, a backup generator, a fully-stocked pantry and a coveted rolodex of repairman willing to go ‘all the way out there.’”

While the winery took shape, the initial vineyard plantings struggled. Eventually, the vineyard was grafted to Pinot Noir, after which it began producing award-winning, Gold Medal wines, under the expert guidance of viticulture consultant Prudy Foxx, who is still involved with the vineyard today.

Then came a revelation. Paul discovered Pinotage, a rare cross between Pinot Noir and a red Rhone grape called Hermitage (aka Cinsault). While it’s the most widely planted red in South Africa, less than 60 acres exist in all of California. He learned of the variety from his first winemaker, Paul Wofford, who was sourcing Viognier, Roussanne and Chardonnay from the Amorosa vineyard in Lodi. Everything about this grape, from its bodacious bouquet to its rush of fruit, carrying oodles of flavor to every part of your mouth, without any of the tannic bite of typical big reds, appealed.

Paul was never one to do things cautiously or without fervor. Once he fell in love with this varietal, he set out to find every vineyard in the state that grew Pinotage, eventually making four vineyard designates of the grape, including the pre-eminent version from the estate. Out went the Pinot Noir and in went Pinotage in 2013, where 3.5 acres of the highest altitude Pinotage in North America continue to thrive.

Each vineyard site expresses the varietal differently. The lower elevation sites tend to be more Rhone-like in their fruit forward intensity and earthiness, while higher elevations, like the estate, are more like Pinot Noir. But they didn’t stop at Pinotage. The Kemps consistently made award-winning Pinot Noir from the Saveria Vineyard in Corralitos, plus Cabernet Sauvignon, Cabernet Franc, Petite Sirah and Merlot. The cellar literally holds something for everyone.

The label is a story in itself. Paul and Amy were big fans of New Orleans artist, Martin La Borde, whose work they collected on each visit to the Big Easy. They contacted La Borde and had him capture the view of Mt. Loma Prieta as seen from winery site to grace their wines. The yellow, red, and orange lines running beneath the green mountains represent the famous 1989 Loma Prieta earthquake. The flying wine connoisseur is a recurring character in Martin LaBorde’s work, a little magician named Bodo. He’s flying over the mountain with a glass of Pinot Noir in hand, a peace offering to the gods that rumble deep within. So far, it’s worked.

After her husband passed away in 2018, Amy became a “wine widow,” and ran the show pretty much single-handedly until November of this year. With both her sons now in college, Logan in law school in Washington DC and Axel a freshman at UC San Diego, it was time to move down from the mountain and take care of her Mom in Arroyo Grande. She feels confident that the winery she labored to create and sustain is in very good hands with the Arriaga family as caretakers.

It’s that old adage of one door closing and another opening. Chris Arriaga had been watching the Loma Prieta Winery property with great interest for a year and a half, since it came on the market. An opportune price reduction made the beautiful turnkey operation even more attractive. Arriaga, who provided security during development of the Apple “spaceship” campus, along with several Facebook buildings, found it irresistible. He and his daughter, Samantha, a CPA, are already enjoying the new venture, meeting club members and getting to know a thing or two about the wine business.

Meanwhile, the weather couldn’t be more conducive to outdoor wine tasting and picnicking. Come meet the Arriaga’s this weekend at Loma Prieta Winery and enjoy a glass of sparkling Pinotage, the nation’s first. An exclusive white beauty made from a very red-skinned grape by Rack & Riddle in Healdsburg, the Loma Prieta sparkling Pinotage was a Platinum medal winner and named Best Sparkling at the Monterey Wine Competition a couple of years ago. It’s like drinking a creamsicle.

If you haven’t visited this enchanting spot yet, come enjoy the views of the entire Monterey Peninsula and Santa Cruz coastline, from an entirely new perspective. Share a glass with Arriaga, who dreamed of being an oceanographer and ended up having a long and successful career in law enforcement instead. Life sure has an uncanny and circuitous way of leading us to our destiny.