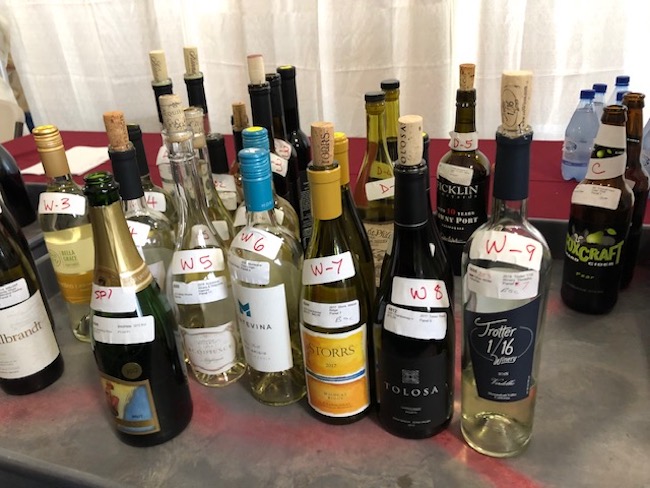 July 2, 2019 – Everybody knows Sunset magazine, for its unabashed love affair with all things American West. After a two-year hiatus, due to changes of ownership with the publication, the Sunset Wine Competition returned to the world stage. It attracted over 2700 entries, and many of them came from right here in our backyard. The field was tight, the quality was high and the overall feeling of the judges was that these were some of the best wines we’d judged all year.

The final sweepstakes round, where Best White, Best Red, Best Sparkling, Best Dessert and Best of Show are chosen, was especially tough, with 31 excellent wines vying for our attention.

Among them, were some of the following Double Gold and Best of Class wines, from the Santa Cruz Mountains and Monterey AVA’s. Those with an asterisk appeared in the final sweepstakes.

Although none of them went on to win, they did hold their own in the sweepstakes round. Going for Best White were a lovely Chenin Blanc, a fine Picpoul Blanc-based Rhone blend, a juicy Pinot Grigio, two excellent Chardonnays, a lively and juicy Verdelho and a fetching Vermentino from Bella Grace in Amador County, which took the Best White crown. I never vote for Chardonnay unless it’s truly extraordinary for a Chard, and in this case, the Storrs Wildcat Ridge proved such a wine. Congrats to Pam and Steve Storrs for this great showing! They were in good company.

In the Best Red dogfight, there were two delightful Pinot Noirs, including the utterly fetching 2015 Furthermore, which garnered my vote, a beauteous Barbera, a tempting Tempranillo, a mighty fine Merlot (St. Francis), a couple of red blends, two decent Cabs, Bargetto’s La Vita Italian red blend (which showed really well) and a gregarious Grenache from Santa Barbara, which ended up winning the day.

When all was said and done, we had to choose Best of Show between the Breathless Brut sparkling, the Apriori Rosé of Pinot Noir, a Chenin Blanc Ice wine that won Best Dessert, the Vermentino and the Grenache. The Sparkling and Rosé each garnered two votes, the Dessert wine one, the Vermentino four and the Grenache took 11 votes to win the shooting match.

Gold medal results for other local wineries are listed here: