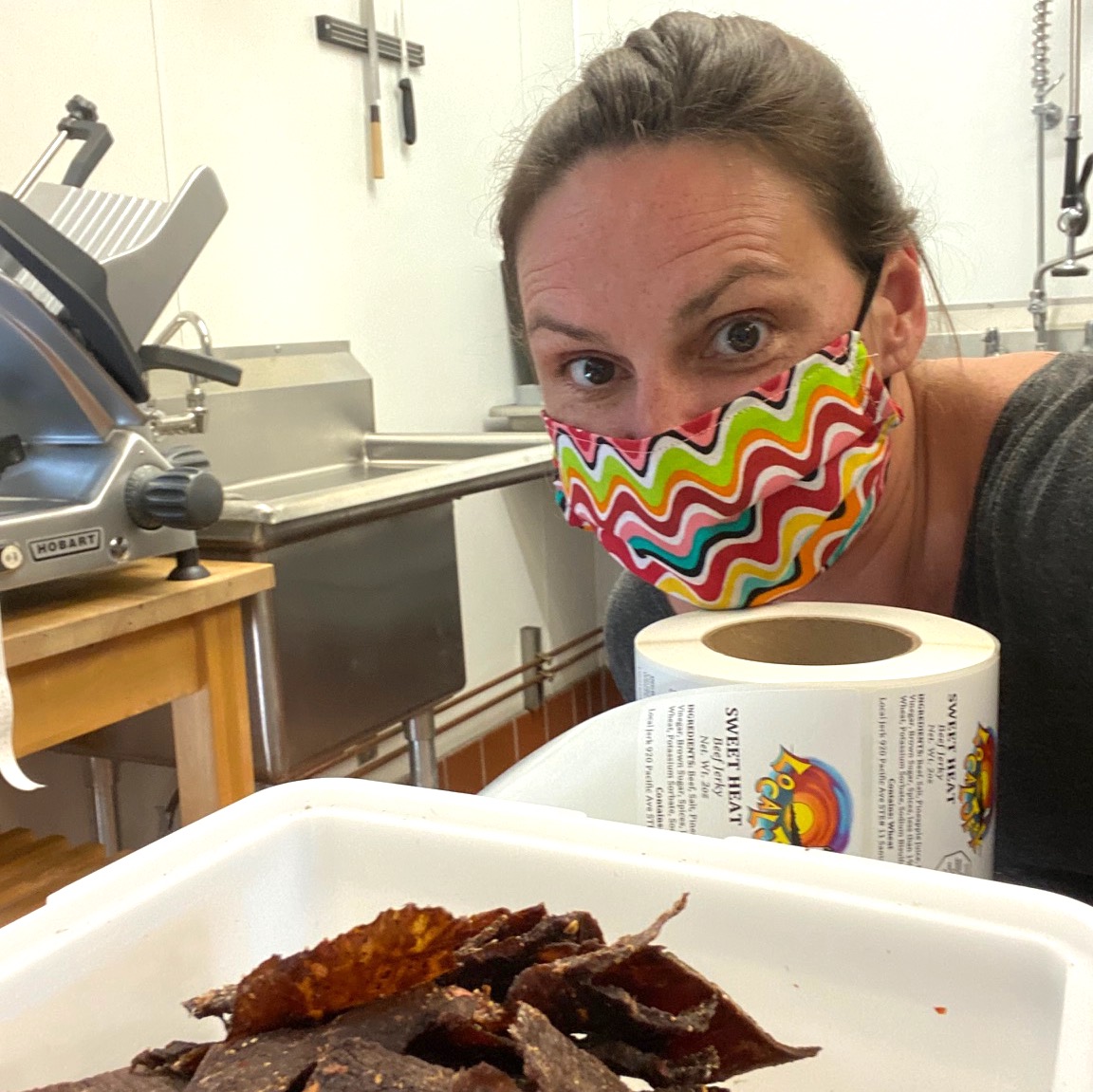 September 15, 2020 – Emma Magelssen has a 284-square-foot “processing plant” (that’s its technical title) where she can fill direct orders for her increasingly popular made-in-Surf-City beef jerky.

Soon she will be selling her original, hot and “sweet heat” Local Jerk at the downtown Santa Cruz farmers market near her tiny headquarters.

She sells a bunch to Brady’s Yacht Club where she first started sharing her dehydrated beef to help raise money for Toys for Tots.

But for now she sells the most out of her backpack while walking around town and local beaches.

“After 10 years working in the local bar industry, people recognize me,” she says. “They hit me up ‘I need some jerky!’ If I have some, they get some.”

For much of that decade in the industry, Magelssen worked at Hula’s Island Grill and Brady’s, the legendary Seabright dive spot. Now, thanks to jerky revenues, she’s down to one night a week at Brady’s backyard garden.

It was at Brady’s once-quarterly fundraisers for good causes that she realized she could potentially donate more than time and tips—and do better in feeding the crowds who would participate.

“I figured jerky is a good snack for drunk people,” she says. “Snickers bars weren’t enough.”

She made $279 peddling jerky at the first fundraiser to which she brought the beef. From there she just kept making it, with Brady’s regulars as her “research and development” taste testers.

Brady’s Bar Manager Armando Quesada prefers the hot version. (“I’m a bit of a heat seeker,” he says.) He stocks his personal bar area and his truck with bags of Local Jerk to make sure he always has high-density, high-flavor snacks at hand. But mostly he’s stoked to see the project gain velocity—to the point where he observes people wearing Local Jerk hats and hoodies around town, and welcomes a surprising amount of peeps to his cantina just for the jerky.

“She’s made a brand for herself where it’s become part of the zeitgeist,” he says. “It’s cool to see something like that happen from scratch.”

Eventually Magelssen expanded her roster of outlets to a dozen bars and started navigating the maze that is the regulation surrounding meat sales.

“I think it’s easier [permitting-wise] to sell marijuana and alcohol,” she says.

While that undertaking is a recent project, Magelssen’s affinity for jerky has been life-long.

She traces it back to a youth spent traveling the country with dry meat in tow.

“We were road warriors—Mom was hippie gypsy,” she says. “Jerky was the snack that got us through.”

It also translated to her outdoorsy Lake Tahoe-born adventurer existence.

“Whether you’re biking, hiking or camping, jerky is a staple,” Magelssen says. “It’s always been easy and packed full of goodness.”

She does hasten to add that many jerkies on the market are not packed with goodness, but loaded with less desirable inputs like nitrates and sugar.

“I try to use ingredients I can pronounce and also really like,” she says.

That includes eye-of-the-round cuts that are lean and lend themselves to strips she likes to cut both with and against the grain for different textures. She sources meat with Better Brands, and applies spices she makes herself by dehydrating hot peppers or crafting her own teriyaki sauce to eliminate unwelcome ingredients like corn starch common in other jerk products.

Her vegan jerky is in development—and made entirely of plants, seeds and pea protein.

Interestingly, the Local Jerk merchandise Quesada referenced has proven nearly as popular as the foodstuffs. Magelssen laughs as she retells her mom saying, in not so many words, “Great work with the jerky, but the logo may outlive it.”

Magelssen then describes a surreal moment when she nearly forgot to brake when she saw the first someone she didn’t know personally wearing her gear.

“I nearly crashed,” she says. “I almost ran him over.”

The merch runs from wallets made from upcycled sails to branded masks, with Natural Motions Creations silkscreener Andrew Pastor leading that part of the production.

Local Jerk goes for $8 per 2 ounce bag, which sounds pretty light. But given how much weight (namely 75 percent) disappears during her prep process, it’s a surprising value. The essential element remains, at least as long as she can keep it in stock.

You could call it meaty. But you certainly have to call it Santa Cruz.